Accessibility links
'Definitely, Maybe': Hardly the Charmer It Might Be Clever premise, winning cast compete with contrived situations and a script that doesn't trust it's warmer impulses. Ultimately, this romantic comedy is a mixed box of chocolates.

Listen
'Definitely, Maybe': Hardly the Charmer It Might Be 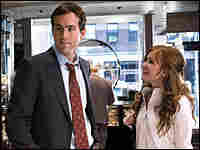 Enchanted April: Isla Fisher (right) plays one of three women who might end up pairing off with Ryan Reynolds' Will. Andrew Schwartz/Universal Pictures hide caption 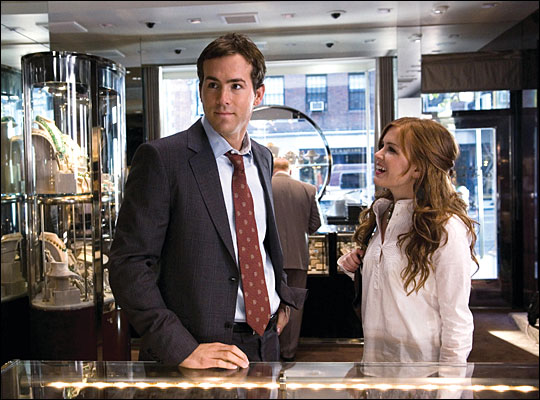 Enchanted April: Isla Fisher (right) plays one of three women who might end up pairing off with Ryan Reynolds' Will.

'Maybe' You Should Watch:

'We Don't Have to Worry'

'No Reason to Be Afraid'

You may have forgotten that this is Valentine's Day weekend, but Hollywood hasn't. The new romantic comedy Definitely, Maybe has opened to take advantage of the holiday — but it's a mixed box of chocolates.

This film has a clever premise, about a soon-to-be-divorced father (Ryan Reynolds) telling his young daughter (Abigail Breslin) how her parents first met. For reasons that will become clear, he won't detail his entire romantic history. Instead, he says, he'll tell the story with all the names, and some of the facts, changed — and young Maya's "just gonna have to figure it out for yourself."

But wait: Why does she want to know? We'll get to that.

Reynolds, one of People magazine's sexiest men, has an appealing romantic-comedy presence; it's easy to see why the trio of women in his life are attracted to his Will Hayes, an ad exec with a past in Clinton-era politics. Wholesome-looking Elizabeth Banks is the Wisconsin college sweetheart who fears his move to Manhattan — where, sure enough, our hero connects with a free spirit played by Isla Fisher and tries to resist Rachel Weisz's aspiring journalist.

With a cast as engaging as this one is, Definitely, Maybe should be home free, but it isn't. The film turns out to be more contrived than it ought to be; its elements, like its women, have trouble staying on the same emotional page. And though it wants to be warm, the script doesn't seem to trust itself. Characters fall back on glib one-liners; writer-director Adam Brooks likes slick situations, but they're not the way to anyone's heart.

One case in point: Maya's curiosity about her parents' past has its genesis in a graphic sex-ed class at her school. Not a great choice, perhaps, for a film bound and determined to do whatever it takes to be your valentine.