Accessibility links
Scientists Map Ocean Damage A new map of the world's oceans shows that human activity has dramatically altered areas of Europe's North Sea and the U.S. Atlantic Coast, among other regions. Scientists say it has the potential to change the way we view the vast resource. 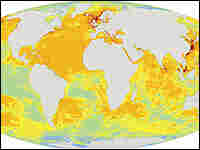 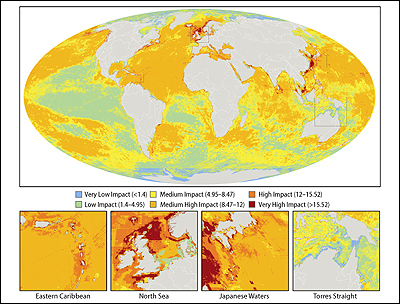 Maps are drawn to tell us about the ways in which mankind has shaped the landscape by building things like roads, canals and cities. Those maps often leave the world's oceans all but blank.

But now a group of scientists has drawn a map that leaves the land blank and highlights what humans have done to the world's oceans. The team was led by Ben Halpern of the National Center for Ecological Analysis and Synthesis in Santa Barbara, Calif. Halpern says the goal is to focus more attention on a part of the world that seems out of sight and out of mind.

"Fly over the ocean in a plane and all you see is blue water," Halpern said. "All you can think is, 'Oh my goodness, how can we possibly be having an impact on such a vast resource?'"

The map, which was published in the journal Science, overlays the ocean with bands of color to highlight manmade changes like overfishing and coastal pollution. Pristine areas, shown in blue, are found in oceans near the poles. More-stressed ocean waters are yellow and orange. Trouble spots are red. Halpern says the red zones are the ones found near big cities and near overcrowded coastlines.

"These are the most impacted ocean areas on the planet," Halpern says. "It's where the combination of human activities, from shipping to fishing to land-based pollution, are coming together to make things really bad."

According to the map, the most disturbed ocean areas include Europe's North Sea, the South and East China Seas, the Persian Gulf, and parts of the Atlantic near the East Coast of the United States. Surprisingly, small zones of pristine ocean water can be found in many of these areas. Halpern says these are the kinds of zones that need to be preserved as a first step toward saving more badly damaged ocean waters.

Changing Our View of Oceans

The data used to make this map came from a wide variety of sources, Halpern says. Fisheries statistics came from the United Nations, and the United States provided data collected by satellites.

But Halpern says that left a lot of gaps. For example, he says his team lacked key information on the fish and other sea life killed and then thrown overboard by giant fishing fleets. Some of those blank spots were filled in by computer programs that allow marine biologists to guess at what they'd find in certain parts of the ocean.

Larry Crowder, a fisheries biologist at Duke University in North Carolina, says this map could change the way a lot of people see the oceans. He compares it to the famous photos of Earth taken by Apollo astronauts in 1968.

That photo "put everybody on the same page, as in 'Hey, we're all living on a little blue dot,'" Crowder says. The new map, he says, "shows us that the ocean isn't infinite, that we can put too much in and take too much out, that we can damage the system upon which we all depend."

The team that drew the new map of the oceans is now working on more detailed regional maps that might be used to predict emerging threats to places like the waters off the coast of California.