Accessibility links
Chief Beer Officer Does Best Work Before Lunch Scott Kerkmans was recently named as chief beer officer for the hotel chain Four Points by Sheraton. If you drink a beer in one of the hotels, chances are it was chosen after one of Kerkmans' rigorous morning tasting sessions. Yes, he drinks in the morning. 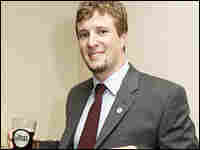 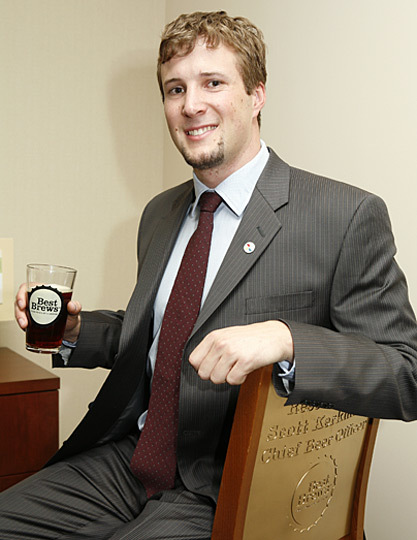 Scott Kerkmans is the chief beer officer for the Four Points by Sheraton hotels. The chain created the position to market so-called craft beers as one of its specialties.

You read that right. It's an actual job. The Four Points by Sheraton hotels chain created the position because it wants to market so-called craft beers as one of its specialties.

A lot of people work for decades before they score their dream job, if they ever do. Kerkmans landed it just a few years after graduating from the University of New Mexico.

"At first, I thought my friends would be happy for me. Well, it turns out they're just jealous," Kerkmans says with a laugh.

'The Napa Valley of Beer'

As far as anyone can tell, Kerkmans is the world's first CBO. He's an ordinary-looking guy with a good sense of humor who mostly works out of his house, a non-descript bungalow in west Denver. The only thing unusual about the place is its basement, where Kerkmans stores dozens of his finest beers, and in some cases, ages them.

"A lot of people think beer can't be aged or doesn't age well. But some of the beers actually age incredibly well," Kerkmans says.

Kerkmans got his first job in the industry as soon as he could legally drink. His beer credentials include a job as a brewer at the award-winning Alaskan Brewing Company. Then at 28, he became the hotel chain's CBO.

The Four Points by Sheraton is banking on that. The hotel chain's "Best Brews" program aims to attract guests who appreciate craft beer. Microbrews account for just under 5 percent of all the beer consumed in the U.S. but they're growing steadily.

In Colorado, for instance, there are 75 breweries within a two-hour drive of Kerkmans' house.

"Really, the best reason to be in Denver is that it's the Napa Valley of beer. There's really more going on here in the craft brewing world than just about anywhere else in the U.S.," Kerkmans says.

His mission, he says, is to educate the masses about beer. And if you drink a beer in a Four Points by Sheraton these days, chances are it was chosen after one of Kerkmans' rigorous morning tasting sessions.

That's right, he drinks in the morning.

"Something just seems a little bit wrong about drinking beer at 8 in the morning, every morning, for me, so I often will wait until about 10 on the mornings that I'm tasting. Not to say that there's anything wrong with having a beer for breakfast. I do that sometimes, too," Kerkmans says.

In the morning, your taste buds are evidently most alive.

Unlike a wine sommelier, Kerkmans always swallows because the hops in the beer register best with the taste buds at the back of your tongue.

"Ahhh, that's a good beer," Kerkmans says after tasting the Maui Brewing Company's American Pale Ale. "It has a really smooth malt flavor and not too harsh of hops. It's always important to take note of the hops and make sure that they're not too sharp on your tongue."

Kerkmans is careful not to drink too much, though. After a few sips, he pours out the rest and moves on. After all, he has three more beers to try. And it's not even time for lunch.