Accessibility links
Clyburn: Superdelegates Won't Pick Dem Nominee Some Democrats are worried that superdelegates may be the determining factor in choosing a Democratic presidential candidate. But influential Rep. James Clyburn (D-SC), who has not endorsed a candidate, tells Farai Chideya, "I don't think anything like that will come close to happening." 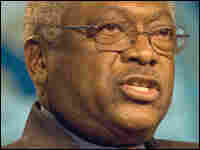 Some Democrats are worried that superdelegates may may be the determining factor in choosing a Democratic presidential candidate. But influential Rep. James Clyburn (D-SC), who has not endorsed a candidate, told NPR's Farai Chideya, "I don't think anything like that will come close to happening."

During the interview, Clyburn also addressed the shifting allegiances of some Democratic superdelegates. He said: "A lot of these people made their commitments ten months ago — even a year ago — when everybody was getting ready for a coronation. They now see there's not going to be a coronation. Everybody is adjusting in order to reflect what their current emotions are."

The following is an excerpt of their conversation:

So your state, South Carolina, was pivotal in the race, and its Democratic primary was called informally by some folks "the black primary" because black voters made up more than 40 percent of the Democratic electorate. This was a moment also when comments by former President Bill Clinton helped to activate the issue of race directly in the campaign. And Barack Obama won your state. You have remained studiously neutral. Where are you today?

I still remain studiously neutral. I think that the historical significance of so-called superdelegates, these are unpledged delegates — is very, very important for us to maintain. We are in place in order to either extend the wishes of the voters or to try to make corrections if they need to be made.

[News & Notes] contributor Donna Brazile, who is also a long-time Democratic party insider and ran the presidential campaign of former Vice President Al Gore, has said she will just up and leave the Democratic Party if the superdelegates are used to broker a convention and that it's not the committed delegates who have come as a part of the voting process who get to make the decision. How do you react to that — someone who is so passionate about the Democratic Party but is absolutely against the superdelegates deciding?

She's in a big club, a club that I think would be overflowing at the meetings if that were to happen. I don't think anything like that will come close to happening. Here is the deal: we all know, the Democrats, we have what we call proportional voting. So if we have votes in these primaries that are proportional and then you get to the end of the process and you're still not at the magic number of 2025, which would be 50 percent plus one, what do you do? Well, that's when the superdelegates step in. They step in to extend the voter's will, not to reverse it.

But even if someone has that magic number, the superdelegates could throw it the other way.

No, that's not what I said. I said, they will not reverse it. I'm saying the superdelegates will step in to extend the will of the people. But you cannot ...

But it could happen mathematically but you're saying you don't think it will happen?

No, that's not what we are. We are here to do for the Democratic Party what United States congresspeople ought to do.

Oh, they remind me of what the voters did in my congressional district and wanting to know whether or not I'm ready to reflect the will of my congressional district to further Obama's interests, and there's some people who want to know that to see whether or not I've got enough guts to vote the other way. And I can tell you, I do have enough guts to vote the other way if I thought that was in the necessary – that was in the interest of nationalizing our party. And I think that's what my voters would want me to do.

You know, a lot of things can change after the primary. I don't know why people keep dealing with that. Next week, something might jump out that's serious and even that will cause some of the people to rethink how they cast their votes on February the 5th. We already have people who are superdelegates who are now rethinking their commitments that they made two and three months ago because the circumstances have changed.

Speaking of which, Representative John Lewis of Georgia endorsed Senator Clinton. And recently, the New York Times said he had moved his support to Senator Obama. He is saying that that is not what he said. But they quoted him saying something is happening in America. And people are prepared and ready to make that great leap. He's again saying he is not casting his superdelegate vote for Senator Obama, but he is reassessing the situation. Does that show the huge amount of pressure that's particularly on members of the Congressional Black Caucus who have been split in their endorsements?

Well, yes, that's true. Congressman David Scott who represents the congressional district adjacent to John's has flat-out switched. He's made it very clear: He is switching to reflect the will of his voters. I think Obama got 80 percent in his district. I read that two other superdelegates have said they're moving to the uncommitted column who had previously committed to Senator Clinton, and another one has since switched. Remember, a lot of these people made their commitments 10 months ago, even a year ago when everybody was getting ready for a coronation. They now see that there's not going to be a coronation. So everybody are adjusting in order to reflect what their current emotions are.

Do you think this whole issue of who gets to decide could tear the party apart as opposed to uniting it?

It could just as soon unite it too; yes, it could. This is a very, very unusual election year. And nobody could have anticipated any of what has happened.