Accessibility links
Bhangra's DJ Rekha Takes the Dance Floor Bhangra, the folk music of the Punjab, has become wildly popular in dance clubs around the world. The scene's roving ambassador, DJ Rekha, has been throwing a party called Basement Bhangra at a New York City club for a decade, but she's just now putting out her first CD.

Hear Songs from the CD 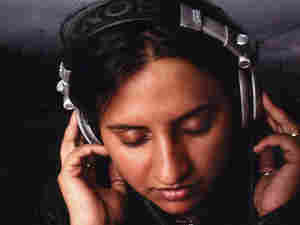 Bhangra is the folk music and dance of the Punjab region of India, but it's become hugely popular in dance clubs around the world. Rekha Malhotra, who performs and records under the name DJ Rekha, is seen by some as a roving ambassador for the music. She's been throwing and DJing a party called Basement Bhangra at a New York City club for a decade, but she's just now putting out her first CD: DJ Rekha Presents Basement Bhangra.

The party, at a club called S.O.B.'s, is about the dance moves unique to the music as well as the music itself. It starts early, and there's always a free dance lesson at the beginning. The crowd is diverse, including people of South Asian descent, people with an interest in South Asian culture, and people just looking to party.

DJ Rekha says she doesn't prepare for her weekly gig. "I never know what's going to happen because I'm always just trying to respond to the crowd," she says. Making an album was different, though, and it took her a long time.

Many people only know one Bhangra song: Panjabi MC's "Mundian to Back Ke" ("Beware of the Boys"), which was already a huge international hit in 2003 when Jay-Z rhymed over a remix. DJ Rekha says that the success of the remix created a sense of urgency in a lot of bhangra artists about the need to collaborate with hip-hop MCs.

She herself doesn't rule out collaborating with hip-hop artists. In fact, an introduction and a short rhyme from Wyclef Jean opens her record. "My goal is to just make my music reach as many people as possible," she says. "So if that means crossing over, then it does. But it's about finding an audience that appreciates it."

The first track, called "Basement Bhangra Anthem," is aptly titled. Like most Bhangra songs, it features the dhol — a two-sided drum that functions as the percussive heart of the music.

A group called Tigerstyle produced "Aaja Nachiye Boliyan Paiye." Brothers Raj and Pops are Sikhs from Glasgow, and they've been influential in the Bhangra scene for almost 10 years.

One of the first to mix bhangra and hip-hop was Bally Sagoo, who produced the track that closes out Basement Bhangra: "Gur Nalon Ishq Mitha." The song was produced in 1990, but it still works on a dance floor today. DJ Rekha often plays it at the end of her party because it's long and it builds. She says she's played it everywhere, in every context.

DJ Rekha says her record isn't a carbon copy of what she'd play at one of her shows. Basement Bhangra does feature artists who've performed at her parties over the years, but the songs on the CD are much shorter than what she could play in a room full of people dancing. Still, she says she set out to make a dance CD, not a world-music CD. The term "world music" strikes her as too anthropological and voyeuristic, she says, but dance music is something anyone can throw on and move to.