Accessibility links
Vader Unmasked: The Sounds and Psychology of Evil Darth Vader is one of Hollywood's most memorable villains, but his status stems from more than just the plot line. His distinctive breathing, brass-march soundtrack, size and character complexity were all tailored to create the terrifying image of man and machine with unlimited power.

Vader Unmasked: The Sounds and Psychology of Evil

Vader Unmasked: The Sounds and Psychology of Evil 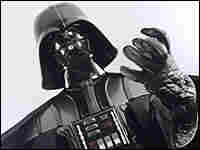 Darth Vader's mask, with its eerie hiss of mechanical breath, is one the most recognizable icons in popular culture. Courtesy Lucasfilm hide caption 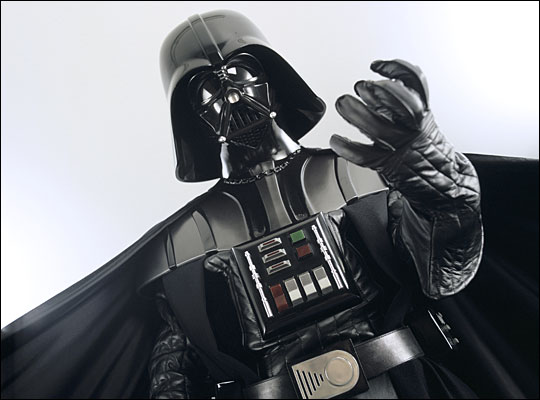 Darth Vader's mask, with its eerie hiss of mechanical breath, is one the most recognizable icons in popular culture.

Who Scares You? Share Your Stories: The 'In Character' Blog. 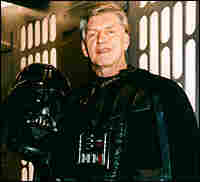 The final piece of Vader's suit, the ominous mask, begins to slide over his burned face in Revenge of the Sith. Courtesy Lucasfilm hide caption

The final piece of Vader's suit, the ominous mask, begins to slide over his burned face in Revenge of the Sith.

When moviegoers first met Darth Vader in the original 1977 Star Wars, it was hard to tell if he was man or machine. Apparently Vader's creator, director George Lucas, described him as a bit of both.

"He was described as a sinister character encased in a special life-support suit, and with some kind of unusual breathing apparatus and helmet over his head," says the film's sound designer, Ben Burtt.

Burtt's job was to come up with the sounds that would come out of that helmet. Vader's ominous voice is famously the work of actor James Earl Jones. But that tell-tale breathing is Burtt's — recorded in the back of a California dive shop, with a small microphone jammed into a scuba regulator.

"You could hear the valve opening and closing, and it had a little bit of a click and clank to it," Burtt recalls. "And the flow of air through the narrow rubber hoses had a really cold, very hissy quality to it. It was unreal."

Burtt went on to record heart monitors and other devices for Vader's life-support system. Then he played the sounds for Lucas. It was too much, Burtt remembers.

"Vader sounded like a walking emergency room with everything going all at once," he says. "You know, clicking, breathing, heart thumping and all of this sound. So we began stripping the sounds away one at a time, and it got down to really what was the simplest solution — which was just to have this very isolated breathing going. It gave Vader that machine-like undercurrent to his character."

It was a menacing audio signature, and one that had a kind of precedent.

"You know, I thought a little bit about Vader as being sort of like the crocodile in the Peter Pan stories, the crocodile that swallowed the alarm clock," Burtt says. The breathing, in other words, becomes a kind of sonic threat signature.

In Vader's case, it was amplified by music — music composed by John Williams, who two years earlier had created one of the most famous danger themes in the history of cinema. And in Star Wars, just as in Jaws, whenever you hear the theme, or leitmotif, associated with Vader, you know something bad's going to happen.

"Sometimes you don't see the bad guy — as in the shark — and you just hear it," says Dan Carlin, who chairs the film scoring department at Boston's Berklee College of Music. "It tells you, Oh my god, that's somewhere; I can't see what it is but I'm scared because I hear the music so the shark must be close. And the same thing with Darth Vader.

Vader's musical calling card was titled "The Imperial March," but it turns the traditional idea of the march on its head.

"Yes, it's brass, it's all low brass, but he does it in a minor key so it doesn't feel quite right," Carlin says. "You get irony there, because normally in a march ... you'd get something happy and bright that everyone wants to march along to. ... Nobody wants to march with Darth Vader."

You Always Remember the Baddie

"Nobody's safe when Vader's around," laughs David Prowse, the 6-foot-7 stunt double and bodybuilder beneath Vader's costume in the first three Star Wars films. "With the boots and the mask and the helmet I probably was 7 feet tall."

His height has sometimes limited Prowse's choice of roles. With Vader, though, his imposing physique was another factor that intensified the character's power as a villain.

"And all I could think of was 3 months in gorilla skin ... how hot and sweaty and smelly that's gonna be," Prowse says. "And I thought, No, you can keep that one, George."

The other was Darth Vader.

"And he said, 'Tell me why, why did you choose the villain?'" Prowse remembers. "And I said, 'Well, if you think back on all the movies that you've ever seen where there are goodies and baddies ... you always remember the baddie.'

Lucas, Prowse says, thought that was the right call.

"'Dave,' he said, 'I think you've made a very wise decision,' he said, 'because nobody will ever forget Darth Vader. '"

The Character Behind the Mask

While Darth Vader's sound and size are instantly scary, there's more menace embedded in the fact that we don't really know who or what he is. Psychoanalyst Steven Cooper says Vader's impenetrable mask is key.

"When you're first introduced to him even the mask is masked," says Cooper, who also hosts a film series called "Off the Couch." "Usually when there's a mask you can develop a theory about why it's there. ... It's covering up something hideous, or it's to be anonymous..."

Not so with Vader — at least not initially.

"Part of what's interesting about this visage is that you have no idea what the mask is about," Cooper says. "He's hidden to us so we don't see any part of his humanity."

One thing the seemingly all-powerful villain is hiding begins to be revealed in the second film, The Empire Strikes Back: Darth Vader is, or was, the father that hero Luke Skywalker thought was long dead. Suddenly, Vader is not only villain, but daddy.

The name Vader, in fact, is Dutch for "Father."

"Plenty of daddies are horrible people," Cooper says. "Many murderous people have children. I think the turning point about [Vader's] being a daddy is that he seems like he kind of loves his son. ... That's what makes him a daddy; he does seem to have conflict when they're fighting."

In the beginning, Cooper says, audiences of all ages respond to Vader because he reinforces the earliest lessons we learn about absolute good and absolute evil.

But as the series progresses, this dark character gets more complex — like King Lear, or Frankenstein. Like all of us, for that matter. In the end, Cooper says, Vader acts as any father should towards a child: He sacrifices his own life to save his son.

And Darth Vader's creator, George Lucas, apparently wanted audiences to know who his tragic character really was. He devoted the three Star Wars prequels that followed the original trilogy to Darth Vader's biography, and to the brutal trauma that turned him from a Jedi into the Dark Lord.