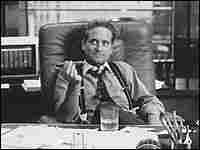 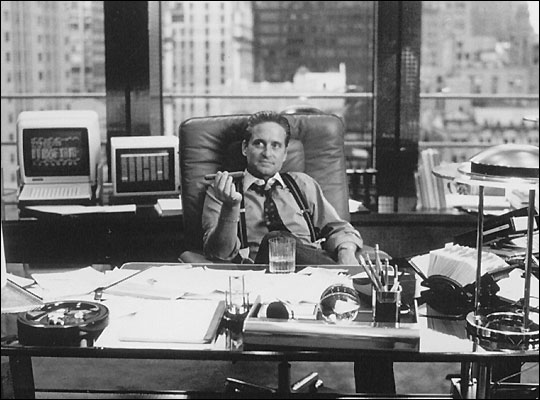 'It's My Birthday: Surprise Me'
'Greed Is Good'

Note: Clips contain language that may offend some viewers. 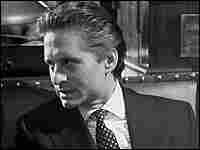 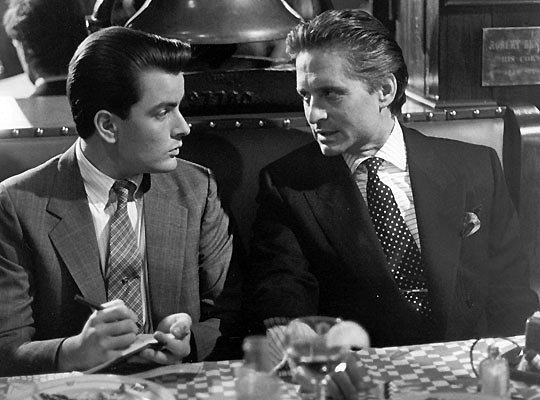 'Lunch is for wimps': But dinner, apparently, can be deal-making territory for Douglas's Gekko (right) and Charlie Sheen's Bud Fox.

Can Greed Be Good? Weigh In: The 'In Character' Blog

But if Fox is the protagonist, the film's most memorable character by far is the high-powered corporate raider he goes to work for, a man named for a lizard: Gordon Gekko.

As conceived by director Oliver Stone, Gekko (played by Michael Douglas in a role that won him an Academy Award) is a slimy embodiment of all that was wrong with American capitalism. When we first meet him, he's pacing around his glitzy Manhattan office, barking orders and juggling phone calls as he takes his own blood pressure. He's a lion of the business world, an alpha male famous for his cunning and financial acumen.

Gekko is also — as the young stockbroker Bud Fox learns — a major-league crook who trades in insider information and manipulates markets as easily as other people make conversation.

"Greed is good," he pronounces at one shareholders' meeting. "Greed is right. Greed works, greed clarifies and captures the evolutionary spirit."

As conceived by Stone and screewnwriter Stan Weiser, the movie was meant to be cautionary tale about business ethics. Gekko was a larger-than-life composite of some of the fallen financiers from the insider trading scandals of the 1980s.

"The Gordon Gekko character is not a person who is satisfied by anything for very long," explains Wall Street veteran Ken Lipper, who served as a technical adviser on the film. "There's no permanent accomplishment. There's no peace until everyone else is a failure — and there's always some other doll popping up to challenge your empire in a free society like this."

Too Charismatic for a Country in Love with Success?

But if there's a flaw in the movie, it's in how dashing Douglas' character is.

"The idea that Gekko was this shiny, beautifully dressed, magnetic, charismatic superstar suited a lot of people in the business world very nicely," says screenwriter Stephen Schiff, who's writing a sequel to the movie.

Although Bud Fox ultimately turns against him and Gekko heads to jail, the character's charisma undercuts the film's moralizing.

Both Douglas and Stone have said that a lot of young people they meet see Gekko as a role model. But George David Smith, a business historian who teaches at NYU's Stern School, says that Gekko is definitely not a capitalist hero. Gekko, says Smith, would have more trouble operating today because regulators pursue that kind of manipulation more aggressively.

Audiences may get a chance to see how Gekko would fare in today's economy. A sequel to Wall Street, called Money Never Sleeps, is in the works.

And though Oliver Stone isn't involved, Michael Douglas has agreed to star.