Accessibility links
American Dream Tracked Down the Hard Way Right after college, Adam Shepard boarded a train with only $25. In his book Scratch Beginnings: Me, $25, and the Search for the American Dream, he writes about spending a year as a day laborer and living in a homeless shelter before finding a steady job and an apartment.

Right after college, Adam Shepard boarded a train with only $25. In his book Scratch Beginnings: Me, $25, and the Search for the American Dream, he writes about spending a year as a day laborer and living in a homeless shelter before finding a steady job and an apartment.

A young man fresh out of college might look forward to a summer traveling abroad or working at some prestigious internship, but after graduating two years ago, Adam Shepard decided to join the ranks of the working poor. He left his home state of North Carolina with little more than $25 in his pocket and the clothes on his back, gave himself a year to find an apartment, buy a car and build up a couple of thousand dollars in savings.

Adam Shepard did establish some rules for his experiment. He couldn't use his personal connections, his college education or credit card to survive, and he couldn't beg for money. Within a year, he'd found an apartment, a car and a steady job and had more than $5,000 saved.

Adam Shepard has written about his experiences in "Scratch Beginnings: Me, $25, and the Search for the American Dream." He joins us from member-station WUNC in Durham, North Carolina. Thanks so much for being with us, Mr. Shepard.

Mr. ADAM SHEPARD (Author, "Scratch Beginnings: Me, $25, and the Search for the American Dream"): Thank you very much for having me.

SIMON: And of all the things to do, why did you decide to do this?

Mr. SHEPARD: I thought this would be a great time to institute this plan, which was my response to a book by Barbara Ehrenreich called "Nickel and Dimed." She did a project of her own where she essentially wrote on the death of the American dream, and I read her book in college, and I wasn't particularly impressed, and so I decided to do this little project of my own, to make a discovery of the American dream for myself.

Mr. SHEPARD: I arrived in Charleston. For the first two weeks…

Mr. SHEPARD: South Carolina, yes sir. For the first two weeks, I did construction clean-up, garbage clean-up, and then after two weeks, I got a permanent job as a mover. For the first 70 days, I was living in the homeless shelter, and from there I moved my way up. In two months I rented a room from a guy downtown, and from there I signed a lease for an apartment for one year.

It was just all about anything that I could save. Transportation, I waited until I had enough money to buy a car, so I was taking the bus. Food, I could cook two meals for $5, or I could go out and eat for $7 or $10. The thing is, it wasn't a lot, and you save $5, $10 a day, but in the grand scheme of things, that's so much money.

SIMON: You know, a lot of people work two jobs, and they wind up eating out because that's all they can do on a schedule like that.

Mr. SHEPARD: You don't have to eat out. You can pack a microwavable something. I mean, I fortunately only had to work one job. I was a busy guy, as well, you know, and I still found time to pack my lunch and take the bus.

SIMON: Didn't you have a lot of advantages that, let's say, an ex-felon looking for a job, who might have to make child-support payments, doesn't?

Mr. SHEPARD: I had a very difficult time, actually, working my way in. I mean, this was a world of convicted felons, and here comes Adam with his floppy hair and his shorts trying to work his way in to a whole new world, a whole new culture.

So did it play to my advantage from the respect that I knew how to budget my money? Perhaps, but how much of an education do you need to make the decision that listen, if I'm buying beer and cigarettes and lottery tickets, then my money is going out the door.

SIMON: Did you have any friends.

Mr. SHEPARD: One guy that I met, Phil Coleman(ph), he gave me the secret to getting a job.

SIMON: What is the key to getting a job?

Mr. SHEPARD: You know, I was sitting there, and I was not really happy that I had passed out 50 applications, and nobody was getting back to me, and he just went nuts, and he said listen, Adam, you are a homeless dude. Nobody looks at your application - you know because I had my homeless shelter as my address -nobody looks at that and says hey, yeah, I want to hire Adam Shepard, the homeless guy. You have to go to these managers and say I'm Adam Shepard, and I am the greatest mover on the planet, and so that's how I got my first job as a mover.

Mr. SHEPARD: I'm working my way up just like the next guy, and now I'm back in Raleigh, North Carolina, and I'm, you know, working as a skycap at the airport, and I'm working to get this message out to say hey guys, listen. Here is your life, and if you're poor or rich, if you make $8 or $50 an hour, if you live in a nice house or a little apartment or in a homeless shelter, you have your life ahead of you.

SIMON: Adam Shepard, the author of "Scratch Beginnings: Me, $25, and the Search for the American Dream." 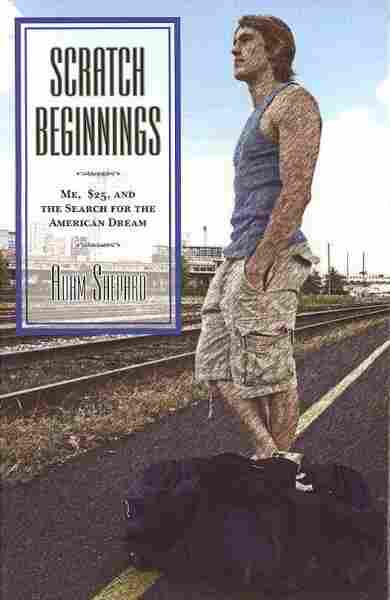 Me, $25 and the Search for the American Dream

Title
Scratch Beginnings
Subtitle
Me, $25 and the Search for the American Dream
Author
Adam Shepard