Accessibility links
Bush in Africa to Highlight Good Works President Bush began Saturday in the West African nation of Benin and ended on the other side of the continent, in Tanzania. He is visiting five of the most stable democracies on the continent to highlight his administration's good works toward health care, education and infrastructure.

President Bush began Saturday in the West African nation of Benin and ended on the other side of the continent, in Tanzania. He is visiting five of the most stable democracies on the continent to highlight his administration's good works toward health care, education and infrastructure. 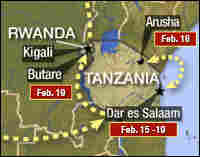 From NPR News, this is ALL THINGS CONSIDERED. I'm Andrea Seabrook.

We begin our program today with Africa. President Bush began the day in the West African nation of Benin and ended on the other side of the continent, in Tanzania. He's visiting five African nations to highlight his administration's contributions to health care, education and infrastructure in Africa.

NPR's Gwen Thompkins has this report

GWEN THOMPKINS: President Bush spent only a few hours in Benin - just long enough to refuel Air Force One, hug the president and receive the nation's highest civilian honor, the Grand Cross of the National Order of Benin.

The medal came on a burgundy sash with what appeared to be the heartfelt thanks of a nation that has never hosted a U.S. head of state. Mr. Bush also signed a compact with Benin that will bring more than $300 million in aid to that country over five years.

President GEORGE W. BUSH: My trip here is a way to remind future presidents and future congresses that it is in the national interest and in the moral interest of the United States of America to help people.

THOMPKINS: That was welcome news to Benin, a West African nation so poor that the government had to rely on voter donations of computers and other equipment to hold its last round of elections.

The president and Laura Bush then moved on to Tanzania - a much bigger and somewhat wealthier state - which is expecting about $1 billion in U.S. aid over five years to build roads and fight HIV/AIDS and malaria.

THOMPKINS: Tens of thousands of people crowded the international airport in Dar es Salaam in the twilight. There were no speeches, but gestures would apparently do. But these appearances, as well as scheduled stops in Rwanda, Ghana and Liberia tell only part of the story of the U.S. in Africa.

On Monday, Mr. Bush is dispatching Secretary of State Condoleezza Rice to Kenya to lend U.S. support to mediation efforts between the Kenyan president and the political opposition. And in his upcoming visit to Rwanda, Mr. Bush says he will talk with President Paul Kagame about peacekeeping efforts in the Darfur region of Sudan.

Since 2004, hundreds of thousands of people have died in ethnic conflict there, and the Bush administration has called the situation genocide.

Pres. BUSH: The African Union stepped forward initially, and one of the reasons I'm going to Rwanda is to thank President Kagame for his strong efforts in Darfur as one of the real leaders in providing peacekeepers.

THOMPKINS: Mr. Bush said he decided against sending U.S. peacekeepers to Darfur early in the conflict, but he is expected to discuss plans for a U.S. military command in Africa. Only Liberia has openly shown interest in hosting such an operation.