Accessibility links
To Shoot a Satellite The United States announced plans to use a missile to shoot down a malfunctioning spy satellite before it crash lands on earth. The U.S. says the falling satellite could pose risks to humans, while others claim the U.S. is exaggerating.

Listen
To Shoot a Satellite

The United States announced plans to use a missile to shoot down a malfunctioning spy satellite before it crash lands on earth. The U.S. says the falling satellite could pose risks to humans, while others claim the U.S. is exaggerating. 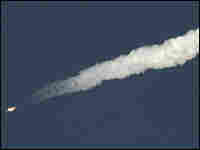 Last week the U.S. announced plans to use a missile to shoot down a malfunctioning spy satellite before it crashes to earth sometime in early March. Initial reactions around here? That's some crazy science fiction.

But it's not; it's real. And there some real questions. Can that really work? How does that work? And then other people started saying that the explanations being put forth by the U.S. government for doing this...a little suspicious. And reports say this morning the U.S. Navy will try to shoot down a satellite Thursday.

So to help us understand how this is all going to happen and why, we've called up Victoria Samson, a research analyst at the Center for Defense Information. Hey, Victoria.

MARTIN: Doing well, thanks. Hey, tell us, when did things start going wrong with this satellite?

Ms. SAMSON: Well, the satellite was launched in December of 2006, and almost immediately stopped working. They weren't able to get hold of it. So they've been keeping an eye on it over the past year. The problem with the satellite is since they can't control it, they can't keep it on orbit at a certain altitude. Which means it's continually falling towards the earth, which means eventually, at some point, it's going to burn up. And usually, in these sort of circumstances, when things burn up, we can kind of control the trajectory, make sure they land in the Pacific Ocean or somewhere where they're not going to do any harm.

This satellite, because we can't control it, we don't know exactly where it's going to fall. So they're a little concerned about that.

MARTIN: Yeah, that is concerning I have to say.

There are lots of theories being posited about why this is happening and why the U.S. government is taking care of the situation this way. Let's go through some of them.

Some are saying it's important to destroy the satellite so the technology literally doesn't fall into the wrong hands. Is that legitimate?

Ms. SAMSON: I'm not too sure about that. This is a National Recognizance Organization satellite. It's a very secretive spy organization, and they are very leery about their technology getting out there. But the satellite would breakup once it hit the earth's atmosphere and they're be a lot of damage down to it. So I'm not too sure that you'd be able to recover anything usable. Besides that, three-quarters of the planet is covered by water, so there's a very good chance it would fall in the brink anyways.

MARTIN: Then the pentagon said the satellite could leak this hydrazine and endanger people here on earth. To me, this sounds very, very bad. Is this a real...

Ms. SAMSON: Well, yeah. You don't want to be breathing any dangerous chemicals. That...about a month ago they started talking about this satellite again. And at first they said, well, you know, there's no problem, really there's a chemical, hydrazine, in the fuel that's used to kind of scoot the satellite around once it's on orbit, but it's not going to do any danger. And then within the past couple weeks, suddenly this is a hugely dangerous problem. They need to take care of it.

Hydrazine, if you're in the actual area, and the hydrazine tank stays completely filled - which is unlikely. Once it hits the atmosphere it would probably breakup and burn up. Then there is a chance if you stay in the area and you breathe it in, you might have some chemical burning. But I don't think it's quite as dangerous as they're making it seem. I think that there are other reasons for what they're doing.

MARTIN: What do you think?

Ms. SAMSON: Well, the Chinese had a satellite test where they tried to - where they shot down one of their old weather satellites about a little over a year ago. And I think that this is the Bush administration's last chance to get their own anti-satellite test in before they leave the office this year.

What they're doing is they're using a missile defense interceptor, which is being built to hit enemy missiles, and they're re-programming the software in order to intercept this satellite they're saying is so dangerous. The problem with that is once we do one software change, we can do many software changes. And in the end, we would have an anti-satellite system. Space weapons are pretty destabilizing and pretty dangerous, so it's kind of a scary precedent to be setting, since we rely so heavily on our space assets.

Ms. SAMSON: Oh yeah, it's a different target. They're moving at about twice the speed, at the end, than they've been tested for. So when things are going faster, you know, there is a whole other slew of questions you could have there. As well it's going to be looking different. And that's kind of a big deal because these missile defense interceptors, it's not like they go up and they look around and they see what's on the horizon and they say, okay, over there is something dangerous; I'm going to go shoot at it. They have to be told ahead of time, here's your target, here's what it's going to look like, here's the speed it's moving at, and here's the section of the sky you'll be looking for it in. And if all those things aren't there, it's not going to know what to shoot at.

Ms. SAMSON: Actually, during the Cold War the United States and the Soviet Union were the ones that actually tested anti-satellite weapons, not that many of them. The last anti-satellite test in the United States was back in 1985, where we launched a missile off an F-15. But you know, as you can tell, that was over 20 years ago, again, because anti-satellite weapons are pretty controversial. And at that point, you know, during the height of the Cold War, we decided, no, we don't want to go that way.

MARTIN: So this is...the U.S. government is putting forth all these other reasons to make sure that this - that nobody really knows that the U.S. government is just testing its anti-satellite capabilities? Is that really so salacious, that you have to cover it up and say it's something else?

Ms. SAMSON: Well, it's kind of a dangerous time, because we criticized the Chinese so heavily when they had their anti-satellite tests because it created so much debris that could hurt other people's space assets, including ours. So it's kind of specious for us at this point to suddenly say, well, it's bad for other people that have anti-satellite tests, but we want to have our own. So I think this hydrazine, the chemical warning threat, is something they've kind of tossed up as a health safety concern so that people don't really question what's going on.

MARTIN: Hmm. Okay. So only - as I understand it, only three of these SM-3 missiles have been modified for this specific use. Does that mean that there are only three chances to hit the satellite?

Ms. SAMSON: Yeah. They've put out a notice to people out in the Pacific Ocean, just west of Hawaii, on Thursday not to go anywhere. So it looks like that's where they're going to be trying to do it. They've got these three missiles with the software modifications so they'll know what to look for. And it's not like if they shoot the missile and they miss they can shoot again. The satellite's moving at such high speed, you're going to have to wait about a day or so to kind of decide, okay, what are we going to do this time? So I'm not too sure what they're concerns are if they miss all three. They're just going to say, well, we're going to wait and see what happens.

MARTIN: And if they miss all three, what's your speculation as to what might - would they just do this again? And do the same excuses still apply for doing this?

Ms. SAMSON: Well, the thing is, this satellite, it's falling towards the Earth; it's going to hit the atmosphere within the next couple weeks. So they have kind of a short window in which to figure out how to deal with this. What they have been doing is they've got teams ready to go, in case it lands on populated territory, to go there and get the wreckage and make sure there's no danger. This hydrazine fuel, if it were to survive the atmospheric landing intact, you know, it landed on the ground, at most it would probably, you could get it over an area of two football fields. So it's not like, you know, the entire country would be contaminated by it.

So they're going to try - I would assume they'd try and get teams on the ground ready to go and make sure you don't have looky-loos trying to get pieces of the spacecraft.

MARTIN: Victoria, a really interesting story. Thanks for helping us wade through some of details. Victoria Samson is a research analyst at the Center for Defense Information. Thanks so much.

Ms. SAMSON: Thanks for having me on.