Accessibility links
Jazzmatazz: Too Soft or So True? Guru, of hip-hop duo Gang Starr, began releasing his own collaborative solo albums in 1993 under the name Jazzmatazz. The ongoing series showcases Guru's collaborations with top hip-hop, R&B, and jazz artists. But has Guru strayed too far from his early days?

Listen
Jazzmatazz: Too Soft or So True? 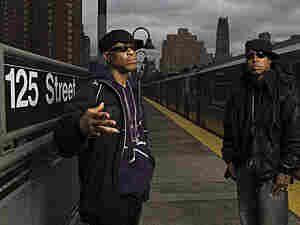 From the beginning, hip-hop artists have mixed together different musical genres. In that spirit, 15 years ago, hip-hop icon Guru (of the rap duo Gang Starr) started collaborating with jazz icons such as Ramsey Lewis, Roy Ayers, and Lonnie Liston Smith.

"I was like, I want to take it to the next level and get the jazz cats we sampled. Get those dudes to come into the studio and jam over some hip-hop beats and blend that," he says. He named the project Jazzmatazz, and 15 years later, he's back with Jazzmatazz, Vol. 4.

Anyone who knew Guru's story would have seen the first Jazzmatazz coming a mile away. Well, more like 215 miles away, just four hours northeast of New York City. That's where Guru grew up, in Roxbury, Mass. Ever since the mid-'70s, when rap was born in the Bronx, Guru has loved hip-hop music.

"I followed everything that was going on in New York," he says. "I bought all the records, had all the tapes. And every chance I got, we used to come to New York — whether it was in a stolen car or whatever. We got to New York!"

Artists born outside of hip-hop's New York mecca have been some of the culture's biggest innovators. From Kingston, Jamaica's Kool Herc to Slick Rick out of London — once the outsiders hit New York City, they often taste a freedom to flip the script in a way that helps rap grow. Guru moved to New York in 1985, and helped create Gang Starr two years later. His raw, laid-back delivery drove many hip-hoppers crazy.

In '93, it was revolution time again for Guru. He dreamed up Jazzmatazz, and called jazz giant Donald Byrd. Guru explained to the veteran trumpeter his new solo-project idea. "He got it right away," he says. "And he helped a lot, because he put the word out... amongst the more open-minded jazz cats about me. There were a lot of jazz cats that were down on hip-hop, that were saying it wasn't real music. But Donald wasn't one of those."

A decade and a half later, Guru is running his own record label called 7 Grand. He's worked with jazz acts including Branford Marsalis, Herbie Hancock, and — on the new disc — saxophonist David Sanborn. But Jazzmatazz isn't just about jazz. The song "State of Clarity," on Vol. 4, lines up piano man Bob James with Chicago rap star Common. Guru says Jazzmatazz is a bridge between younger hip-hop fans and jazz and soul lovers from the old school. He's confident the formula works, because Guru mixes "grown folks music" with the edge he's had since his first rap group.

"That legacy of Gang Starr — street knowledge, intelligence, spirituality — those principles have been taken to new heights by 7 Grand," Guru says. "And the real Gang Starr heads, they get it."

Or maybe not. Because, even when Jazzmatazz, Vol. 1 came out 15 years ago, it was clear that Guru had crossed over to the Soft Side. That Gang Starr rawness was suddenly way overcooked. On this new disc, the jazz/rap/R&B fusion has blended everything into a bland cliché that's sapped rap of the fury that was also once its creative fire.

But what do I know? Maybe Vol. 4 is hot — among old-school rap fans and jazz heads. Now, how to find out?

The streets are where rap is from, and I figured that's where I'd find the best critics. So I loaded the boombox with D cells, slapped in the new disc, and headed out into Los Angeles. I stood at the corner of King Blvd. and Crenshaw Blvd., across the street from Louisiana Famous Fried Chicken and M & M Soul Food. L.A. has all kinds of hoods, and this is certainly one of the more famous. It seemed like a good place to come and ask folks what they think of the new Jazzmatazz, Vol. 4.

I got three mostly positive reviews — from a Gang Starr lover and a couple of older jazz fans. And what about the 20-and-under set?

Guru assures me that one's a done deal. He and DJ Solar both have kids. "They love it. In fact, they're the barometer. We play it for them first; they're gonna let us know. They ain't gonna say it's hot just because it's us."

Jazzmatazz, Vol. 4 is out now. If you do get a copy, take it out to a street corner and bump it for yourself — for the young'uns and the elders.