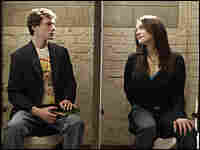 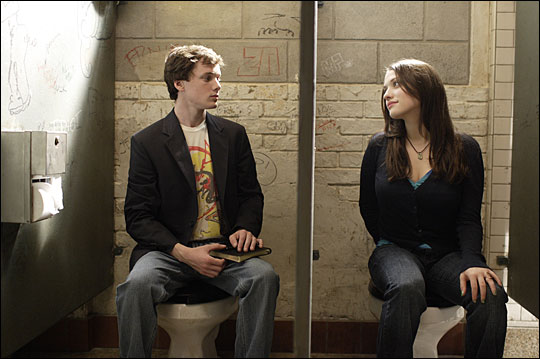 Susan Gardner (Kat Dennings) gets advice from Charlie Bartlett (Anton Yelchin) — who runs a kind of contraband, amateur psychiatry practice out of the boy's bathroom at his high school.

Ferris Bueller's Rx for teen angst was to take the day off; Charlie Bartlett's equally entertaining prescription is to come see him in his office. That would be the second stall in the boys' bathroom, where Charlie'll listen to your problems and provide a little insight.

Dorky, endearing Charlie (Anton Yelchin), a smart rich kid who's been kicked out of every private academy his overmedicated mom has ever sent him to, doesn't fit in at his first public school either, until he starts doing unto others as his shrinks are doing unto him. Dispensing life lessons — along with the occasional upper or downer, in capsule form — he's a superstar, a thorn in the side of the powers that be, and still a (John Hughes–style) kid finding his place in life.

First-time director Jon Poll keeps all this business breezy and sitcom-light, with help from a pitch-perfect cast — Yelchin downright charismatic as Charlie, Hope Davis radiantly spacy as his mom, Kat Dennings smart and snarky as his girlfriend. And it counts as something of a masterstroke to cast Robert Downey, Jr. — teen bad boy of such '80s films as Less Than Zero and The Pick-Up Artist — as the hard-drinking but responsible school principal.

The film's plot is predictable, and its ruminations anything but deep, but in its own idealized, lighthearted way, Charlie Bartlett is the most sweetly subversive teen comedy to come along since Ferris skipped school.