Accessibility links
'The Signal' A mysterious transmission radiates through the city of Terminus, driving citizens into murderous mania. Shot in three parts, by three directors, the film's an intriguing experiment — but a disjointed plot makes for low entertainment value. 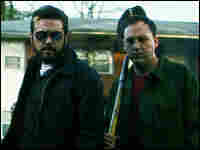 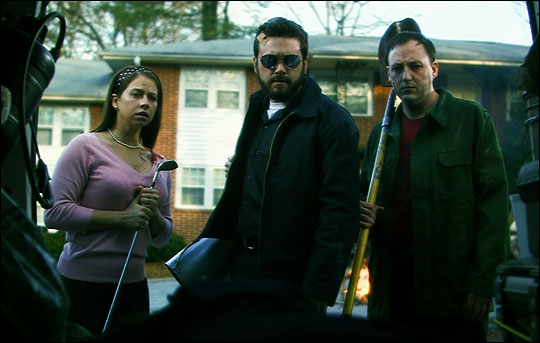 From left, Cheri Christian, AJ Bowen and Scott Poythress fall victim to a mysterious, murder-inducing transmission in The Signal. 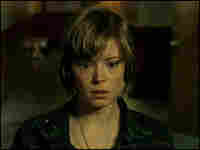 Insanity rocks a town after the late-night broadcast of murder-inducing static over TV, radio and telephone lines. A kind of craziness might also be said to rock The Signal, as three directors offer three different approaches to segments of the narrative.

The story is broken into "transmissions," with the first — in which a woman returns from a rendezvous with her lover to find her husband slaughtering his football-watching buddies — being played pretty straight. Transmission Two gets played for laughs, as the husband follows his now-frantic wife into the streets, only to be sidetracked by a party where severed heads smoke cigarettes, and there's more blood than beer. Transmission Three is played more for weirdness than for laughs, with the woman's lover riding to the rescue ... sort of.

With three directors, it's something of a wonder that the film is coherent at all, but though the narrative is followable, it's also scattered enough that you'd have to call The Signal more a curiosity than an entertainment.