Accessibility links
Swimming Robot Takes Its First Icy Plunge An aquatic robot takes an experimental dip into the icy waters of Lake Mendota in Wisconsin. Scientists hope someday to use the technology to explore ice-bound lakes in Antarctica and even distant icy moons. 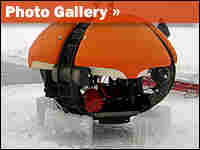 Watch a slideshow of the experiment.
Nell Greenfieldboyce, NPR

Down in Antarctica, there are some big, mysterious lakes. One of them is Lake Bonney. All year long, it's covered by 12 to 15 feet of ice. Scientists would love to know more about the world hidden beneath all that ice, so later this year, they want to send in a swimming robot to explore it. But first, they have to make sure the robot can take the cold.

The testing ground on this chilly day is Lake Mendota in Wisconsin. Peter Doran, professor at University of Illinois in Chicago and lead investigator for this project, is standing on a vast expanse of white ice. Next to him are a couple of guys with chain saws who are carving out thick blocks of ice to open up a rectangle of blue water. It looks like a swimming pool.

"Initially we were talking about a 30-by-30 hole," Doran says. But once they started cutting, "that seemed a little unrealistic."

This is where a crane is going to drop a robot the size of a Volkswagen Bug. The robot has sensors, and it can carry science equipment and swim around by itself to map a body of water.

"So far, this thing has had a very cushy life swimming around in Mexican caves," where the water is around 77 degrees Fahrenheit, Doran explains. "So we want to put it to the test in the cold."

The robot is sitting in a garage on the shore. It looks like some kind of mechanical fruit.

"I usually say that it looks like a big tangerine," Vickie Siegel says. Siegel works with Stone Aerospace, the company that built the bot. She says its real name is ENDURANCE, named after the ship that Ernest Shackleton took to Antarctica in 1914. But some people call it the clementine because it's so round and orange.

The color is on the special foam that helps it float. Siegel says the foam is her favorite part, and not just because it looks cheerful.

"There's nothing that can go wrong with the foam, really. Everything else is a potential problem," Siegel explains.

The whole point of today's test is to find those problems, so the robot will be ready to go to Antarctica later this year.

With the hole in the ice completed, the robot is ready for its swim. A forklift carries the robot out of its garage. The researchers hook it to a cable, and a crane lifts it up. It looks like a UFO flying over the ice.

The robot is lowered slowly into the exposed patch of water. It sinks gently into the lake with a small burble, but the cable is still attached, just in case engineers need to pull it out unexpectedly.

A bright green cable runs from the robot up to the second floor of a nearby building. That's the control room. On a computer screen, team members see what the robot sees: the underside of the ice. But something's wrong.

"It's dead in the water as far as mobility," Bill Stone, the head of Stone Aerospace, says. It's possible that the cold has knocked out electrical connectors, but he says he doesn't really know at this point.

The swim ends prematurely, to be replaced by an evening of repairs. "We're going to just go down one by one the things that we think we can debug, and if we have to tonight, we're going to tear the vehicle apart," Stone says.

That's just what they do. The next morning, the robot is in the garage. Its cheerful orange foam has been taken off, and its guts are spilling out. Then the team puts the whole thing back together and sends it out again. They have to hack out the ice that froze over their swimming pool.

Folks up in the control room try firing the robot's thrusters. There's just a small ripple in the water as it starts to rotate, still attached to the crane's cable.

"That's a good sign. The thrusters are working," Siegel says.

They unhook the robot. Stone radios up to the control room. "You're free; you're clear," he says. "About a quarter of the vehicle is under the ice."

And soon the robot is gone, somewhere beneath our feet.

Over the next couple of days, the team troubleshoots more glitches. Everything has to be working before the robot goes to Lake Bonney in Antarctica this fall.

And if that effort goes well? Someday a robot like this could be sent off to Europa, a moon of Jupiter. It has a thick icy crust and maybe, inside, a secret ocean to be explored.