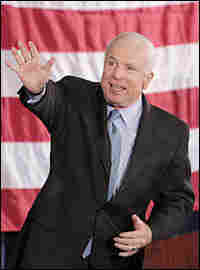 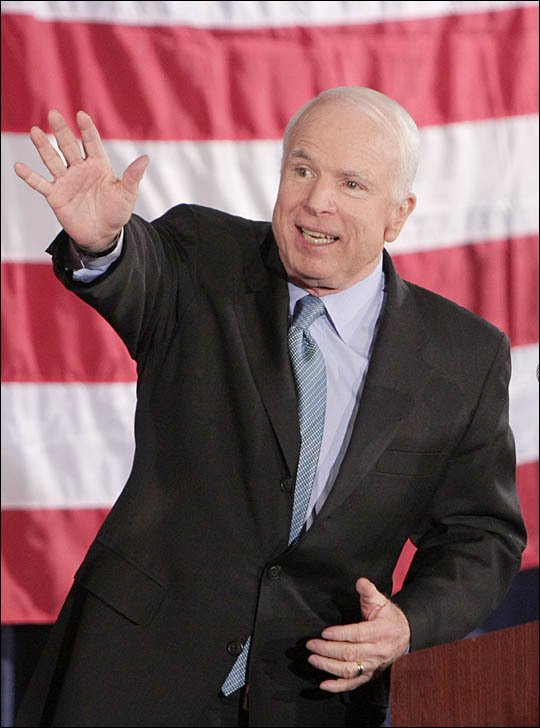 Democratic presidential hopeful Barack Obama has scored an industrial-strength win in the Wisconsin primary. Along with his expected victory in the Hawaiian caucuses, Obama will have extended his winning streak to 10 since Super Tuesday.

The Wisconsin victory is especially important for Obama, who drew strong support from working-class voters and all but erased Hillary Clinton's advantage with women.

By the time the Wisconsin votes were counted, Obama and Clinton were looking ahead to the next round of contests in Texas and Ohio.

Obama celebrated his Wisconsin victory more than 1,000 miles south, with a boisterous rally at the Toyota Center in Houston, Texas.

The win in Wisconsin adds a booster rocket to Obama's bandwagon, which has been on a roll ever since Feb. 5. According to exit polls, the Illinois Senator not only won the young, well-educated voters who've backed him elsewhere. He also nearly matched Hillary Clinton among female voters in Wisconsin. And he did well with union members, lower-income voters, and those without a college education.

Al Omick used to work for a company making beer and soft drink containers. The West Milwaukee retiree says he voted for Obama because of his plan for cracking down on lobbyists.

"With all the money that they're taking, we don't have a solid vote. And if we don't get Obama in there, we'll just go back into what we have been for the last 25 years," Omick said.

Obama also beat Clinton among Wisconsin voters who say the economy is their biggest concern. That could be a sign of what's to come in other big industrial states, where people are worried about the loss of manufacturing jobs. Tuesday night, Obama was thinking about Ohio, which holds its primary in two weeks.

"There are workers in Youngstown, Ohio, who have watched job after job after job disappear because of bad trade deals like NAFTA," he said. "(Workers) who've worked in factories for 20 years and then one day they come in and literally see the equipment unbolted from the floor and sent to China."

Clinton was in Youngstown, Tuesday night. She offered supporters there a preview of a speech she'll give Wednesday.

"I want to talk to you about the choice you have in this election. And why that choice matters. It is about picking a president who relies not just on words but on work — on hard work to get America back to work. That's our goal," she said.

The Clinton campaign is counting on winning in Ohio and Texas, and a spokesman said Tuesday he doesn't think the Wisconsin results will change that. He noted there are two weeks and two debates before the contests in those states, and a lot can happen between now and then. Still, after losing 10 races in a row, Clinton is trying hard to find a chink in Obama's political armor.

"Both Sen. Obama and I would make history. But only one of us is ready on day one to be commander in chief, ready to manage our economy, and ready to defeat the Republicans," she said.

Both Obama and Clinton have begun to campaign not only against each other, but also against Republican John McCain. The Arizona Senator took a step closer to formalizing the GOP nomination yesterday, winning the Republican primary in Wisconsin.

McCain told supporters in Waukesha County yesterday he respects Republican rival Mike Huckabee, but added the party must be united. 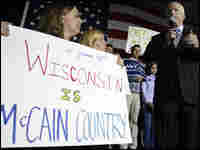 A supporter holds up a sign as Republican presidential candidate John McCain of Arizona speaks at a rally in Brookfield, Wis., on Tuesday. Joshua Lott/Getty Images hide caption 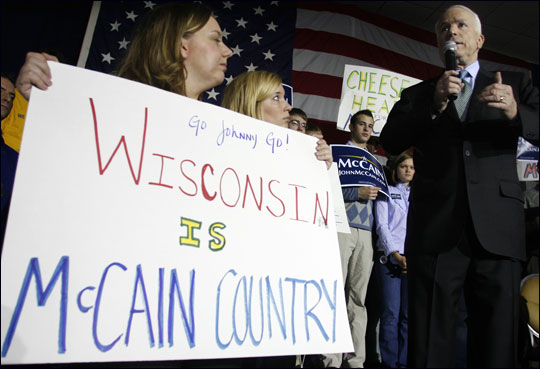 A supporter holds up a sign as Republican presidential candidate John McCain of Arizona speaks at a rally in Brookfield, Wis., on Tuesday. 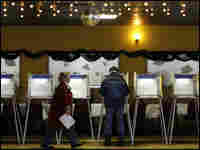 A woman walks away from a voting booth after casting her ballot at Country Keg & Pub Restaurant in Cedarburg, Wis., on Tuesday. Joshua Lott/Getty Images hide caption 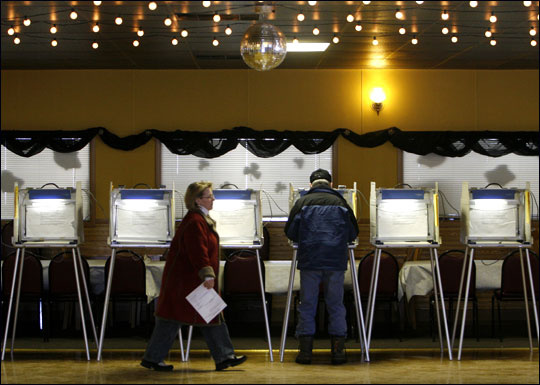 A woman walks away from a voting booth after casting her ballot at Country Keg & Pub Restaurant in Cedarburg, Wis., on Tuesday.

Taken together with Hawaii, Obama now has 10 consecutive wins against Clinton, counting eight states, the District of Columbia and the Virgin Islands.

Exit polls showed that Obama continued to make inroads into Clinton's base by splitting the vote among women, union households and households with less than $50,000 in annual income. He also managed a modest majority among white voters.

In his victory speech, Obama wasted no time before looking ahead to the next contests, to be held on March 4 in Texas, Ohio, Rhode Island and Vermont. Speaking from a Houston stage and holding a sample ballot, he told supporters that early voting in Texas had already begun and asked them to help him secure more delegates.

"Houston, I think we've achieved liftoff," he said about his Wisconsin win.

On the Republican side, Arizona Sen. John McCain easily defeated former Arkansas Gov. Mike Huckabee in Wisconsin's presidential primary. McCain's victory is likely to increase pressure on Huckabee to drop out of the race so that the Republican Party can unite behind a single candidate.

Huckabee has said he will remain in the race until either he or McCain secures the necessary delegates to win the GOP nomination. That would appear all but certain to happen on March 4.

In his victory speech Tuesday night, McCain focused on the general election campaign.

"I will fight every moment of every day in this campaign to make sure that Americans are not deceived by an eloquent but empty call for change," he said, referencing one of the central themes of the Obama campaign. In recent days, Obama — who is known for his inspirational speeches — has come under attack from both McCain and Clinton for the content of his speeches. On Monday, the Clinton campaign accused him of "plagiarism" for borrowing some of his rhetoric from other speakers.

Clinton did not deliver a concession speech at her campaign event in Youngstown, Ohio. Instead, she highlighted her own strengths as a candidate while also taking a swipe at Obama. At a rally, she told supporters that a presidential primary "is about picking a president who relies not just on words but on work — on hard work to get America back to work."

In presidential contests across the U.S., the economy has emerged as a top concern for voters, and the Wisconsin electorate was no exception. Exit polls there showed trade was also a key issue for the many working-class Democrats who voted. Seven in 10 voters said international trade has caused job losses in Wisconsin, while fewer than one in five voters said it created more jobs than it has eliminated.

Independents cast about one-quarter of the ballots in the Democratic race. Roughly 15 percent of the electorate said they were first-time voters.

On the Republican side, McCain received stronger support among moderate Republicans than among independents, a group that he has won easily in other contests. His rival Huckabee received more support among those who called themselves very conservative.

Wisconsin has long nurtured its tradition of an open primary, meaning voters could easily vote for candidates in either party. The state does not register voters by party, and new voters can even register at the polls on the day of the contest.

With the Democratic race still tight, Wisconsin and its 74 Democratic delegates took on greater importance in the battle between Clinton and Obama. But the candidates could not focus all of their attention on Wisconsin— given the other upcoming primaries and the task of winning over the party's superdelegates, who act as free agents and who can vote for any candidate regardless of the popular vote in their states.

During his campaign stops in Wisconsin, Obama talked mostly about the economy and tried to court the state's white, working-class voters. He visited a General Motors assembly plant in Janesville, Wis., telling the workers, "We have greater income disparity in this country than we've seen since the first year of the Great Depression."

Clinton's campaign has always kept its focus on the upcoming primaries in the delegate-rich states of Ohio and Texas. The evening of the Feb. 12 "Potomac Primary" — in which she lost contests in Maryland, Virginia and the District of Columbia to Obama — Clinton delivered her concession speech from El Paso, Texas, where she hoped to do well with the region's large number of Hispanic voters. Clinton also began running ads in working-class Ohio, featuring images of a waitress working late, in which she expressed her sympathy for those who must work the "night shift."

On the Republican side, McCain has an impressive delegate lead over Huckabee and is largely perceived as the party's inevitable nominee. His campaign rhetoric during the past week has reflected this presumptive status: He has focused his attacks on his potential Democratic opponents, with an eye toward the general election, rather than on Huckabee, his chief remaining Republican rival.

McCain received two key endorsements recently. On President Day, former President George H.W. Bush threw his support behind McCain and urged other Republicans to do the same. Former Massachusetts Gov. Mitt Romney, who dropped out of the GOP presidential race earlier this month, asked his pledged delegates to vote for McCain.

Still, McCain has yet to fully win over his fellow conservative Republicans, who tend to view him as a renegade for breaking party rank over issues such as immigration.

From NPR reports and the Associated Press