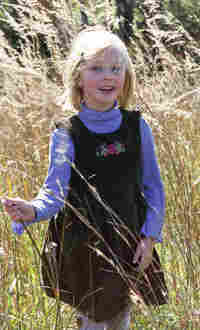 A couple years ago, I made my sister Hallie a mix tape. She lives in West Virginia and is married to an old-time musician named Andrew, so I sent her some indie rock for when she got sick of the banjos and mandolins. She loved it and listened to it all the time.

One night, Andrew was reading with their daughter Cora, then 5 years old, and they heard a noise in the back of the house. Cora asked, "What if it's a robber?"

"What if it is a robber?" Andrew asked back. "What would you do?"

Cora said, confidently, "I know what I'd do. I'd launch a glass across the room directly at his head and dash upstairs to take cover."

That line is taken almost directly from the song "Dance Music," by The Mountain Goats, which I'd put on the mix I made for Hallie. Cora had been listening and memorizing. She knew every word to songs by The New Pornographers, Mates of State, and Sean Na Na, and "Dance Music" was her favorite.

On the occasion of the release of the new Mountain Goats record, Heretic Pride, I asked Cora to write down why she liked the song.

"It's good. It always sounds like "duh duh duh" in the background. I remember going to South Carolina listening to it. We had it turned up very little loudly. That was before my sister was born. The whole family came when she had her birthday. I wish people would do that for mine. No one does that for mine. Anyway it's good, and that's all I have to say for today. Well, for now."

As Hallie said, "Um, Cora went a little... off-topic." Might have something to do with the fact that Cora is turning 8 on Saturday. Happy Birthday, Cora. I'm checking plane tickets now.