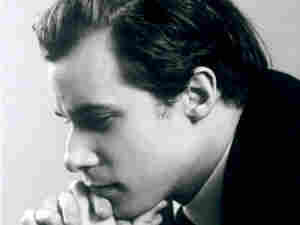 Glenn Gould, the Canadian-born pianist, was as renowned for his eccentricities as for his dazzling, idiosyncratic piano work. Twenty-five years after Gould's death at the age of 50, his performances are still being reissued. Sony recently released an 80-CD set of his Columbia records; the package traces the extraordinary range of his recording career.

Gould was an indispensable artist, even when he wasn't at his sublime best. No other pianist ever captured his uncanny combination of the sparkling and the gravely solemn. The crisp, clear sound of his touch is unmistakable. The recording studio was more important to him than the concert hall, and even after he stopped appearing in public when he was 32, he continued to record for another 18 years. His first album, in 1955, was his incandescent version of Bach's "Goldberg Variations" — maybe the single most famous performance of this brilliant work.

A very different version of the "Goldberg Variations" — slower, more autumnal than exhilarating, and more controversial — was the last recording Gould released during his lifetime. An entire bonus disc is devoted to Gould and critic Tim Page discussing the differences between these two versions. Gould specialized in Bach, and was both apologetic and unapologetic about playing Bach on the piano rather than on more historically authentic instruments. Beethoven was another Gould cornerstone. He recorded 21 sonatas, plus concertos, variations, a marvelous disc of Bagatelles, and even a complete Beethoven symphony arranged for piano by Franz Liszt.

Very few pianists play Haydn, but early in his career, Gould made a memorable version of a Haydn Sonata. Very late, he re-recorded this one and five more. He had a low opinion of Mozart, and said he recorded his last Mozart sonata just to complete the set. He certainly raced through them. He was essentially a classicist, and he never recorded either Chopin or Schubert. But he played surprisingly beautiful and sensitive Brahms. His great loves ranged from the early English composers William Byrd and Orlando Gibbons to such challenging 20th-century figures as Berg and Schoenberg. He rediscovered unusual pieces by Bizet, Sibelius, Grieg, and Richard Strauss. His strangest disc might be Strauss' melodramatic "Enoch Arden," with actor Claude Rains reciting what Gould called Tennyson's "drawing-room epic."

Gould was also a composer. Among his pieces are a string quartet and a delightful vocal quartet called "So You Want to Write a Fugue." Both are included in this new set, in which the discs come in CD-sized reproductions of all his original album covers. He wrote his own liner notes, but you need a magnifying glass to read them. Even a new box set won't unravel all of Gould's mysteries, but hearing them keeps reminding us that he was one of the most astoundingly original musicians who ever recorded.