Accessibility links
Hair Wars: Redefining the Updo Pythons, fighting fish, sports team logos — nothing is off-limits at "Hair Wars," a circus-like hair extravaganza. Founded in Detroit about 20 years ago, the event has expanded across the U.S., challenging the boundaries of what can be done with a person's hair. 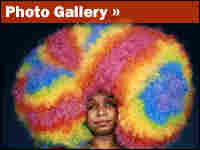 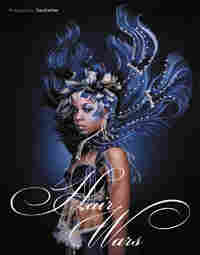 A bowl of fighting fish can look quite elegant entangled in a head of hair, and a python can give an updo a certain edginess.

These are not fashion lessons to be learned off the pages of Vogue, but Hair Wars is not a typical fashion venue. At the circus-like style extravaganza, nothing is off-limits.

David Humphries created Hair Wars about 20 years ago in Detroit. Over the decades, it has turned into a national touring show.

In a world where most people stick to the same trendy cuts and fades, he said the stylists love the chance to break away.

"They use Hair Wars as a forum to really go crazy, and Hair Wars is a place for them to showcase it. That's the platform that we have for them to be the artists that they are," he said.

At a recent show, at least 2,000 people packed into a hotel ballroom. In the center, models of many ages and sizes strutted down a catwalk to the pounding thump of hip hop. Although they were dressed elaborately — some in shiny crop-tops, others in glamorous gowns — no one was really looking at what they were wearing. This was all about the hair.

During the four hours, about 250 models crossed the runway. There were women with helicopters on their heads, propellers spinning. Another woman balanced a barbecue grill complete with spatulas and tongs in her long locks. Just when it seemed a creation was impossible to top, a lady sauntered down with a four-foot python in her do.

Backstage stylist Rafael arrived with his models — the picture of elegance, with black and white gowns and fantastically elaborate updos. One looked like a sparkling chandelier, another like a cascading fountain.

"I've always been into fantasy hairdos," he says. "It's my dream. It's inside me."

Near Rafael, another stylist worked feverishly, attaching sculpted pieces to a girl's head. The stylist, Dangtoy Lewis, said just one of these coiffures can take weeks to create and can cost a considerable amount of money.

"You get four minutes on stage, but you know what? Just that five minutes' fame is worth it to me," Lewis said.

Back out in the ballroom, the audience applauded for a rainbow afro that was at least 4 feet wide. Artist Tyree Guyton watched in amazement.

"This has taken me to another level of what it can be," he said. "Taking hair beyond what we think it should be."