Accessibility links
'Fortune Cookie' Offers New Taste of America Growing up, Chinese-American writer Jennifer 8. Lee noticed the food at Chinese restaurants differed greatly from what her mother served at home, and an obsession was born. The result is a book called The Fortune Cookie Chronicles. 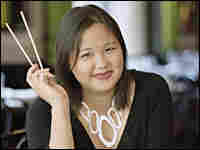 Jennifer 8. Lee is a reporter for The New York Times and author of a forthcoming book about Chinese food in America, The Fortune Cookie Chronicles. Nina Subin hide caption 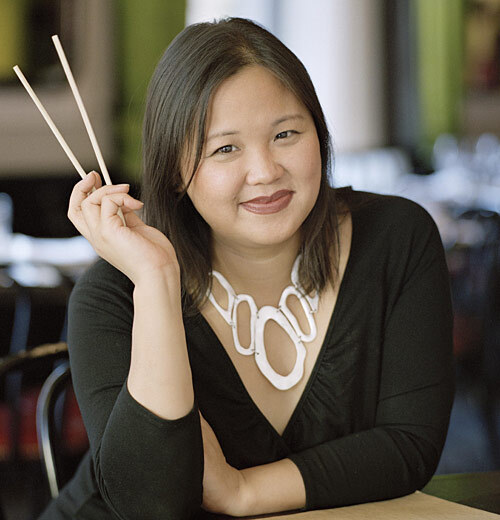 Jennifer 8. Lee is a reporter for The New York Times and author of a forthcoming book about Chinese food in America, The Fortune Cookie Chronicles.

Read an excerpt from the book about the origins of the fortune cookie.

Writer Jennifer 8. Lee says she grew up as an ABC — or American-born Chinese.

From prom to pop culture, her parents encouraged the three Lee children to embrace America, even as they stressed Chinese culture in their household.

Her mother's traditional dishes filled the supper table, so Lee was perplexed by the dishes in Chinese restaurants.

The food in the little white takeout boxes was so different from the meals her mom prepared.

That curiosity led to a book, The Fortune Cookie Chronicles: Adventures in the World of Chinese Food, which is due out in March.

Lee, a reporter for The New York Times, says the book is the product of an obsession.

"My interest started when I was about 13, and I found out that fortune cookies weren't Chinese," Lee says.

"It was a disconcerting discovery, like I was adopted and there was no Santa Claus at the same time. In a way, I had bought into the myth of what is really 'Chinese,'" she says.

Lee explains how fortune-cookie lucky numbers connected Powerball winners in 2002, as well as how an overwhelming majority of fortune-cookie "fortunes" originate from one of two sources: Wonton Food in New York City or Steven Yang, who does not speak fluent English and works out of a warehouse in California.

She also describes how fortune writers have to craft bits of wisdom that meet an American audience's expectations — and don't inadvertently offend — and why fortune cookies don't translate well in Asia.

"People think of fortune cookies as being Chinese but in essence, they are fundamentally American," Lee says.

"We might be shifting away from a Eurocentric view of the United States into something that's much more multicultural, multinational, and Chinese food is just one slice of that," she says. 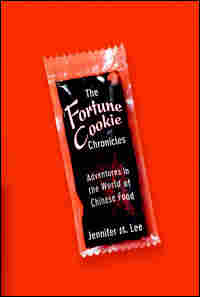 Chapter 3: A Cookie Wrapped in a Mystery Inside an Enigma

It was a clash between cities. A battle of cultural legacies. A matter of competing firsts. The identity of an American icon was at stake.

The critical 1983 debate: Who invented the fortune cookie, and where?

The courtroom, located on the fourth floor of San Francisco's City Hall, was filled to standing room only. The media had arrived in full force — local and national, newspaper and television. Bakers sat next to businessmen. A federal judge presided.

On one side was the Los Angeles contingent, which argued that the inventor of the fortune cookie was David Jung, a Chinese immigrant from Canton, the founder of the Hong Kong Noodle Company in Los Angeles shortly before World War I.

On the other side sat the San Francisco contingent, which claimed that fortune cookies had no Chinese origins at all but, rather, were introduced by a Japanese (!) immigrant named Makoto Hagiwara, who'd tended the Japanese Tea Garden in Golden Gate Park, also shortly before World War I.

At one point during the trial, Sally Osaki, a San Francisco city employee who had done research to support the Japanese argument, dramatically pulled out a set of round black iron grills. These irons were originally used by the Hagiwara family to cook the fortune cookies, she announced.

Not only did Osaki have the only physical evidence in a trial based largely on hearsay, but San Francisco had the home-court advantage. The sponsor was itself a local civic booster organization. (An earlier trial by the same court had ruled that the martini had been born in San Francisco, rather than in the nearby city of Martinez — a decision which was later rejected in Martinez by another mock court.) There was at best only the slimmest of chances that San Francisco would lose in a media kangaroo court.

Indeed, Judge Daniel M. Hanlon handed out a ruling that San Francisco, not Los Angeles, was the birthplace of the fortune cookie. The room, full of locals, burst into cheers and applause. The Los Angeles attorney scowled and muttered about an appeal.

But it was an odd split decision. The judge stayed mum on the other, and arguably more interesting, question: whether Japanese or Chinese immigrants had introduced the cookie to the United States. He intoned, "Matters of the East, we should leave to the East."

That question was still unanswered, more than twenty years later, as I began my investigation of the fortune cookie. It gnawed at me: Could fortune cookies have been introduced to the United States by the Japanese? Did Chinese restaurateurs steal the idea of fortune cookies from their fellow Japanese immigrants? If so, why had the Chinese succeeded in making them so popular?

Over the millennia, the Japanese have borrowed many concepts and inventions from the Chinese — written language, soy sauce, even chopsticks. Certain cultures tend to get credit for inventing practically everything, among them the Greeks, the Arabs, and the Chinese. Are fortune cookies an example where the cultural osmosis worked in reverse?

It cannot be denied that the fortune cookie is an odd member of the Chinese dessert family. Traditional Chinese desserts, as any Chinese-American child will tell you, are pretty bad. There is a reason Chinese cuisine has a worldwide reputation for wontons, and not for pastries.

For most of our young lives, my family was baffled by elementary school bake sales, to which we were told to bring in goodies to sell. While other kids arrived bearing brownies, chocolate chip cookies, and apple pies, Chinese families didn't bake. Even today, my Western friends who move to China are bewildered when they find that their apartments don't have ovens. "What do you do on Thanksgiving?" one friend wailed.

By the time I entered fifth grade we had formed our response to the bake sales: handmade fried dumplings — but with ground turkey instead of ground pork (healthier, my mom said). They were always one of the first items to sell out.

The yumminess of desserts is largely dependent on two things: (1) sugar and (2) fat. In contrast, traditional Chinese desserts use little sugar and fat, and a lot of red bean and lotus, peanut and sesame, soy and almond. Even the famous Chinese moon cakes, essential to the Mid-Autumn Festival, taste a bit like the hockey pucks they resemble. I scrutinized other Chinese baked sweets — the almond cookie (which was at least a cookie) and the yellow egg roll (which was rolled, something similar to folding) — for any family resemblance to the fortune cookie. It wasn't out of the realm of possibility, but I felt like a paleontologist trying to justify a hypothesis using only vague evidence from the Cambrian period. If the Chinese had introduced the crispy, curvy, wafer-thin fortune cookie to the United States, where had they drawn their inspiration from?

It's fairly easy to trace fortune cookies back to World War II. By the 1940s English-language fortune cookies were already commonplace in Chinese restaurants in San Francisco and southern California. San Francisco was a way station for servicemen to and from the Pacific arena, and the influx of eager, bright-eyed young men during the war helped fuel the rise of the city's flamboyant Chinese nightclubs. Soldiers and sailors flocked to Chinese restaurants, where they were treated with the familiar — chop suey, chow mein, egg foo yong — and the exotic fortune cookies. From California, the cookies made an accelerated postwar journey across the country. Convinced that these San Francisco fortune cookies were part of truly "authentic" Chinese cuisine, servicemen started demanding the treats when they returned home to the Midwest and the East Coast.

Mystified but eager to please their customers, local Chinese restaurant owners placed orders with California cookie makers. As demand around the country grew, local entrepreneurs in major cities set up their own fortune cookie companies — though production still centered in Los Angeles and San Francisco and, eventually, New York. Customized cookies were used to announce engagements. Boxes of fortune cookies were sold on supermarket shelves.

By the late 1950s, Americans were consuming an estimated 250 million fortune cookies a year, and the little folded desserts were becoming part of popular culture. At the 1960 Democratic convention, both Senator Stuart Symington and Adlai Stevenson distributed them as part of their presidential campaign, as did Abraham Beame in his 1965 mayoral race. In 1972, as a prank, someone even presented Chicago's Irish mayor, Richard Daley, with green fortune cookies. Companies were buying custom cookies to hawk everything from airlines to power companies, and from fish sticks to pharmaceuticals. And when Transamerica executives heard of a planned protest to their then-controversial (now-iconic) pyramid-shaped building in San Francisco, they greeted the protestors with fortune cookies filled with custom messages like "Transamerica not square outfit" and "Pyramid protestor miss point." The cookies helped quell the objections.

It is the history of the fortune cookie prior to World War II that is murky. A number of families claim to be its originator, with elements of their stories sharing similar aspects. They all have an Asian immigrant inventor introducing the cookie in California sometime before World War I. All the alleged inventors are long, long dead. Their children and grandchildren are dying off too, so we are left with a matter of "he said, his son said, and his grandson said."

Even the figures in the 1983 fortune cookie trial were disappearing in alarming numbers by the time I began searching for them. David Jung's son was dead. Makoto Hagiwara's grandson was dead. I had no reason to believe that Sally Osaki, who had pulled out the black iron grills at the trial, was still alive. But churning through the public records, I found a number of different listings in the San Francisco area for a Sally Osaki who was in her seventies. How many could there be? I figured. I left messages on her answering machine and waited. 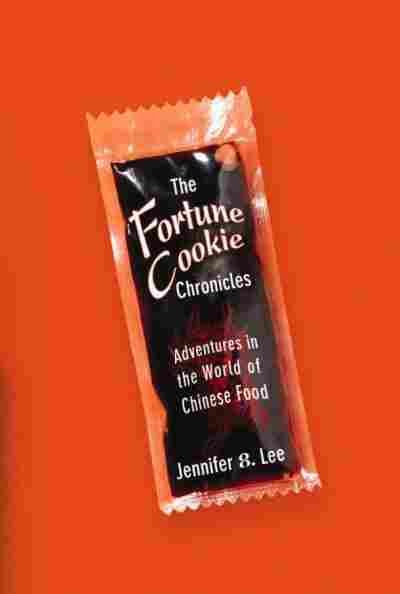 Adventures in the World of Chinese Food