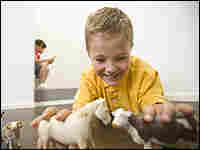 Your Questions on Kids & Play

Organizing play for kids has never seemed like more work. But researchers Adele Diamond and Deborah Leong have good news: The best kind of play costs nothing and really only has one main requirement — imagination.

Here, they answer your questions about play.

Self-regulation is a critical skill for kids. Unfortunately, most kids today spend a lot of time doing three things: watching television, playing video games and taking lessons. None of these activities promote self-regulation.

Here are their suggestions:

Simon Says: Simon Says is a game that requires children to inhibit themselves. You have to think and not do something, which helps to build self-regulation.

Complex Imaginative Play: This is play where your child plans scenarios and enacts those scenarios for a fair amount of time, a half-hour at a minimum, though longer is better. Sustained play that last for hours is best. Realistic props are good for very young children, but otherwise encourage kids to use symbolic props that they create and make through their imaginations. For example, a stick becomes a sword.

Activities That Require Planning: Games with directions, patterns for construction, recipes for cooking, for instance.

Encourage Children to Talk to Themselves: "Like adults, children spontaneously speak to themselves to guide and manage their own behavior," Berk says. "In fact, children often use self-guiding comments recently picked up from their interactions with adults, signaling that they are beginning to apply those strategies to themselves.

"Permitting and encouraging children to be verbally active — to speak to themselves while engaged in challenging tasks — fosters concentration, effort, problem-solving, and task success." — Alix Spiegel

On October 3, 1955, the Mickey Mouse Club debuted on television. As we all now know, the show quickly became a cultural icon, one of those phenomena that helped define an era.

What is less remembered but equally, if not more, important, is that another transformative cultural event happened that day: The Mattel toy company began advertising a gun called the "Thunder Burp."

I know — who's ever heard of the Thunder Burp?

The reason the advertisement is significant is because it marked the first time that any toy company had attempted to peddle merchandise on television outside of the Christmas season. Until 1955, ad budgets at toy companies were minuscule, so the only time they could afford to hawk their wares on TV was during Christmas. But then came Mattel and the Thunder Burp, which, according to Howard Chudacoff, a cultural historian at Brown University, was a kind of historical watershed. Almost overnight, children's play became focused, as never before, on things — the toys themselves.

"It's interesting to me that when we talk about play today, the first thing that comes to mind are toys," says Chudacoff. "Whereas when I would think of play in the 19th century, I would think of activity rather than an object."

Chudacoff's recently published history of child's play argues that for most of human history what children did when they played was roam in packs large or small, more or less unsupervised, and engage in freewheeling imaginative play. They were pirates and princesses, aristocrats and action heroes. Basically, says Chudacoff, they spent most of their time doing what looked like nothing much at all.

But during the second half of the 20th century, Chudacoff argues, play changed radically. Instead of spending their time in autonomous shifting make-believe, children were supplied with ever more specific toys for play and predetermined scripts. Essentially, instead of playing pirate with a tree branch they played Star Wars with a toy light saber. Chudacoff calls this the commercialization and co-optation of child's play — a trend which begins to shrink the size of children's imaginative space.

But commercialization isn't the only reason imagination comes under siege. In the second half of the 20th century, Chudacoff says, parents became increasingly concerned about safety, and were driven to create play environments that were secure and could not be penetrated by threats of the outside world. Karate classes, gymnastics, summer camps — these create safe environments for children, Chudacoff says. And they also do something more: for middle-class parents increasingly worried about achievement, they offer to enrich a child's mind.

Change in Play, Change in Kids

Clearly the way that children spend their time has changed. Here's the issue: A growing number of psychologists believe that these changes in what children do has also changed kids' cognitive and emotional development.

It turns out that all that time spent playing make-believe actually helped children develop a critical cognitive skill called executive function. Executive function has a number of different elements, but a central one is the ability to self-regulate. Kids with good self-regulation are able to control their emotions and behavior, resist impulses, and exert self-control and discipline.

We know that children's capacity for self-regulation has diminished. A recent study replicated a study of self-regulation first done in the late 1940s, in which psychological researchers asked kids ages 3, 5 and 7 to do a number of exercises. One of those exercises included standing perfectly still without moving. The 3-year-olds couldn't stand still at all, the 5-year-olds could do it for about three minutes, and the 7-year-olds could stand pretty much as long as the researchers asked. In 2001, researchers repeated this experiment. But, psychologist Elena Bodrova at Mid-Continent Research for Education and Learning says, the results were very different.

The Importance of Self-Regulation

And it's not just children who use private speech to control themselves. If we look at adult use of private speech, Berk says, "we're often using it to surmount obstacles, to master cognitive and social skills, and to manage our emotions."

Unfortunately, the more structured the play, the more children's private speech declines. Essentially, because children's play is so focused on lessons and leagues, and because kids' toys increasingly inhibit imaginative play, kids aren't getting a chance to practice policing themselves. When they have that opportunity, says Berk, the results are clear: Self-regulation improves.

"One index that researchers, including myself, have used... is the extent to which a child, for example, cleans up independently after a free-choice period in preschool," Berk says. "We find that children who are most effective at complex make-believe play take on that responsibility with... greater willingness, and even will assist others in doing so without teacher prompting."

Despite the evidence of the benefits of imaginative play, however, even in the context of preschool young children's play is in decline. According to Yale psychological researcher Dorothy Singer, teachers and school administrators just don't see the value.

"Because of the testing, and the emphasis now that you have to really pass these tests, teachers are starting earlier and earlier to drill the kids in their basic fundamentals. Play is viewed as unnecessary, a waste of time," Singer says. "I have so many articles that have documented the shortening of free play for children, where the teachers in these schools are using the time for cognitive skills."

It seems that in the rush to give children every advantage — to protect them, to stimulate them, to enrich them — our culture has unwittingly compromised one of the activities that helped children most. All that wasted time was not such a waste after all.