Accessibility links
Islamist Political Party Faces Conflict in Tajikistan Tajikistan is the only country in former Soviet Central Asia to allow an Islamist party to operate. However, the party has been increasingly marginalized in the last decade. At the same time, some secular Tajiks worry about "Islamization" in their society. 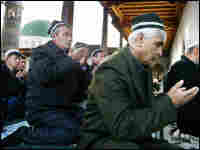 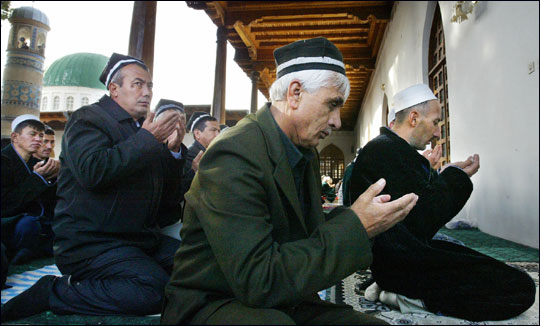 Tajik Muslims pray in the Mavlonoa mosque outside Dushanbe in this October 2006 file photo. 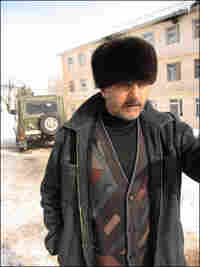 Mirzokhujar Ahmadov, a former Islamist opposition commander who now heads the anti-organized crime police unit in the former rebel stronghold town of Garm, walks past his jeep, which was strafed with bullets during a clash with an elite Tajik police unit in early February. Many Tajiks feared the incident would reignite Tajikistan's civil war. Ivan Watson, NPR hide caption 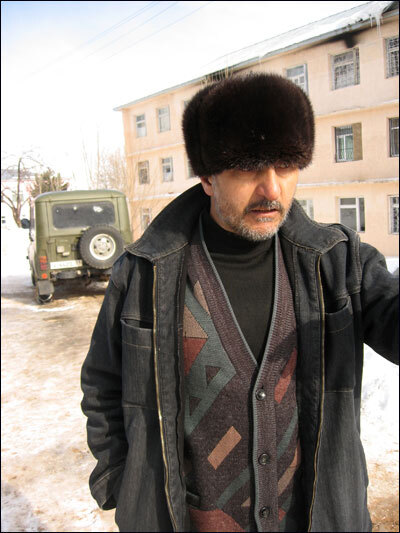 Mirzokhujar Ahmadov, a former Islamist opposition commander who now heads the anti-organized crime police unit in the former rebel stronghold town of Garm, walks past his jeep, which was strafed with bullets during a clash with an elite Tajik police unit in early February. Many Tajiks feared the incident would reignite Tajikistan's civil war.

What role should Islam play in the daily life and politics of Muslim countries? Almost all of the secular authoritarian governments in former Soviet Central Asia have settled this divisive question by outlawing and, in some cases, brutally repressing Islamist movements. Only Tajikistan, a small country bordering Afghanistan, allows an Islamist political party to operate.

Muhiddin Kabiri is the chairman of Tajikistan's Islamic Renaissance Party, the only legal Islamic political party in the former Soviet Union.

"It [makes] us unique and, at the same time, it's a very big responsibility to show a new face of Islam, especially political Islam, in our region," he says.

Kabiri describes himself as a moderate caught between two political extremes. He says the Central Asian region needs a new model "because the people are tired from secular authoritarian regimes and [religious] radicalism — radical groups, extremist groups," he says.

The Islamic Renaissance Party started out in Soviet days as an underground youth movement. During the 1990s, it became a leading faction in an opposition coalition that fought a bloody civil war against the Russian-backed Tajik government. As part of a peace deal in 1997, the party's fighters laid down their arms and promised not to try to turn Tajikistan into an Islamic republic.

"They reiterated their intent that they would not restructure the state — that Islam was part of their agenda, but it was not the only element," says Roger Kangas, a Central Asia expert at the National Defense University in Washington.

But the Islamic Renaissance Party has been increasingly marginalized in the decade since the war. Kangas says its leader, Kabiri, is one of only two party members to win seats in Parliament after what he called deeply flawed elections.

"They've faced some difficult challenges, but I would say even with that, they've not radicalized," Kangas says. "One could almost expect that to happen, but they've not."

The Tajik government has jailed several top IRP leaders on corruption charges, while many former opposition fighters have been gradually forced out of positions in the Tajik security services.

Many Tajiks feared that a deadly clash earlier this month between rival factions within the Interior Ministry could reignite the civil war.

In Dushanbe, more than a hundred uniformed officers turned out for the funeral of an elite police colonel who was killed while trying to capture another police officer, former Islamist opposition field commander Mirzokhujar Ahmadov, who now heads a police department in a remote mountain town north of the capital.

In Garm, Ahmadov gave a visitor a tour of his bullet-riddled headquarters, where he was still working weeks after the incident. Dressed in a fur hat and flashing several gold teeth, Ahmadov insisted his men fought in self defense when they found themselves suddenly surrounded by more than 30 masked Interior Ministry troops.

The commander demonstrated how he fought with a Kalashnikov assault rifle from a window on the second floor of his building.

Outside the building, blood still marked the snow where the slain police commander, Oleg Zakharchenko, was shot in the head. During the civil war, Zakharchenko fought with the pro-government faction.

"Our [police] unit is the only left from the former opposition in Garm," Ahmadov said. "That's why they want to capture or prosecute us like they did the others."

The former rebel commander said he would not abandon his post, even if the government sends more troops to arrest him.

"If they do that, it will mean the start of another civil war," Ahmadov said.

Kabiri, of the Islamic Renaissance Party, denies any links to Ahmadov. Instead, he complains about what he says is government oppression of the young generation of devout Muslims in Tajikistan.

In recent years, the government has banned women from wearing Islamic headscarves in schools, closed a number of mosques and banned woman and children from attending mosques.

In the town of Vahdat, the Muslim cleric claims observant Muslims had more freedom during the last years of the Soviet Union than they do today. Why, the priest asks, are women prohibited from entering mosques while they are allowed to go to bars and nightclubs?

As for the ban on children in mosques, that decree is largely ignored at the mosque in Vahdat. Many young boys prayed and studied the Quran side by side with more than a hundred men.

Among many secular Tajiks, there is growing concern about what some describe as the creeping Islamization of Tajik society.

"We're scared they want to take us back to the Middle Ages," says Saifula Safarov, who runs a government think tank in Dushanbe. "After all, we're not very far from Afghanistan and Pakistan."

"If you put pressure on them ... you would see new leaders coming up. New leaders of a more radical character," Mulujanov says. "You would see a rise of confrontation between this political party and the government."

That's a view echoed by Western diplomats in Dushanbe — and by Islamic Renaissance Party leader Kabiri, who says he has come under fire from hard-line Islamists, who accuse him of not being Muslim enough.

"Any violation of rights, they will help radicalism and radical groups," he says.