Accessibility links
Pentagon: Missile Scored Direct Hit on Satellite The U.S. Navy has successfully intercepted a defunct spy satellite using a surface-to-air missile — a first-ever such demonstration by an American warship. Debris from the shattered satellite was expected to burn up during re-entry. The interceptor missile was launched from the Navy cruiser USS Lake Erie off Hawaii at 10:30 p.m. EST. 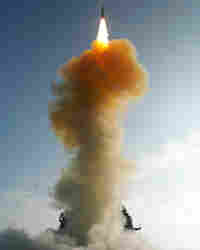 A handout image provided by the U.S. Navy shows the USS Lake Erie launching a Standard Missile-3 at a non-functioning National Reconnaissance Office satellite as it traveled in space at more than 17,000 mph over the Pacific Ocean, Feb. 20, 2008. U.S. Navy/Getty Images hide caption 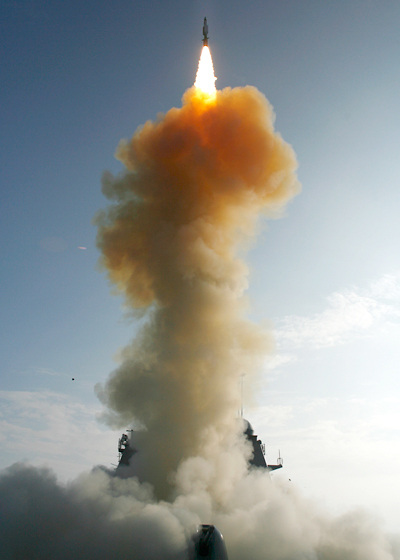 A handout image provided by the U.S. Navy shows the USS Lake Erie launching a Standard Missile-3 at a non-functioning National Reconnaissance Office satellite as it traveled in space at more than 17,000 mph over the Pacific Ocean, Feb. 20, 2008.

The U.S. Navy said Thursday it was tracking debris from a spy satellite it destroyed using a missile fired from an American warship.

The White House ordered the satellite's destruction due to concerns that its onboard fuel supply could pose a toxic hazard if the craft re-entered over a populated area.

The interceptor missile was launched from the Aegis-class cruiser USS Lake Erie off Hawaii at 10:30 p.m. EST. Two other ships, the USS Decatur and USS Russell, were also part of the task force.

The general said the pattern of the satellite's destruction and a spectral analysis indicate the missile hit its target.

Marine Gen. James Cartwright, vice chairman of the Joint Chiefs of Staff and an expert on military space technologies, said that officials have a "high degree of confidence" that the missile struck its target: the satellite's fuel tank, containing 1,000 pounds of toxic hydrazine.

He said the Pentagon was tracking debris from the satellite and had only seen "football" sized chunks, most of which were burning up before reaching the ground.

The interception came nearly one year after the United States sharply criticized China for carrying out a similar test mission. In Beijing, Foreign Ministry spokesman Liu Jianchao said his nation was "closely monitoring" the test and its aftermath.

He called on Washington to "strictly abide by its international obligations and quickly provide any information or data that would help other countries to take protective measures."

The classified spy satellite malfunctioned soon after reaching orbit in December 2006. It was due to fall to earth sometime this week. 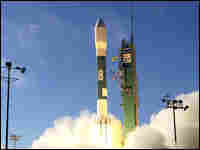 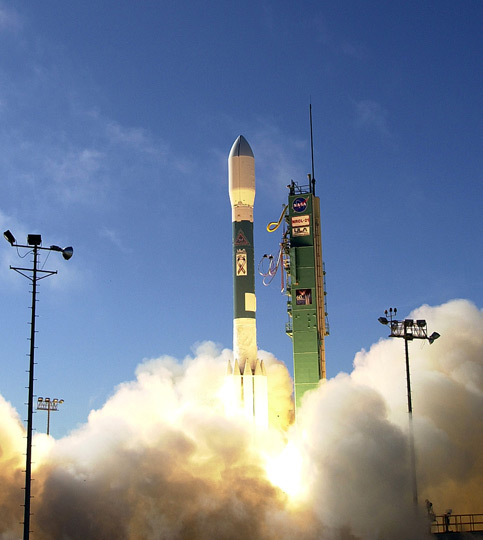 A Delta II rocket carrying the spy satellite launched in December 2006 from Vandenberg Air Force Base in California. 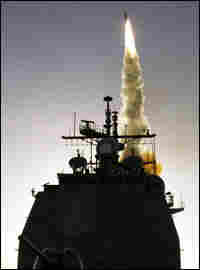 A Standard Missile-3 (SM-3) launches during a test mission from the Aegis cruiser USS Lake Erie in Kauai, Hawaii, in 2003. The same cruiser is scheduled to take part in the mission to launch an SM-3 missile to hit a U.S. spy satellite. AP Photo/U.S. Navy hide caption 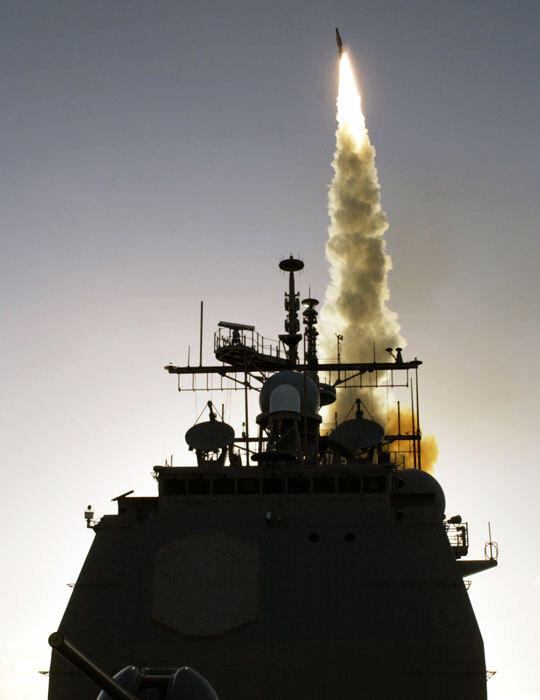 A Standard Missile-3 (SM-3) launches during a test mission from the Aegis cruiser USS Lake Erie in Kauai, Hawaii, in 2003. The same cruiser is scheduled to take part in the mission to launch an SM-3 missile to hit a U.S. spy satellite. 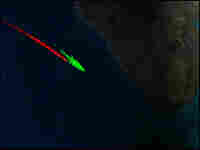 The video still above illustrates what happens after a Navy missile hits the U.S. spy satellite: The debris (shown in green) will orbit the Earth and then start to burn up upon re-entry (in red). Courtesy Analytical Graphics, Inc. and Applied Defense Solutions, Inc. hide caption

President Bush earlier this month decided to shoot down a broken U.S. spy satellite orbiting Earth — before it crashes and spills its toxic fuel.

A Navy cruiser in the Pacific Ocean will launch a heat-seeking anti-defense missile into orbit as early as Wednesday night in an effort to destroy the fuel tank.

Here, the nuts and bolts of the Navy's mission:

Why is the Navy shooting down this spy satellite?

Government officials say they are concerned that the fuel tank could land in a populated area, rupture and turn into a toxic gas. The fuel is hydrazine — which in gas form would be similar to chlorine and could damage skin and lungs. Some experts doubt this rationale, however. John Pike with globalsecurity.org believes American officials worry that pieces of this spy satellite (which takes pictures) could fall into the hands of the Chinese or Russians, who could learn more about how the United States builds these satellites.

What will the Navy use?

Three Navy Aegis cruisers will take part in the effort, though only one will be used to target the satellite, which is about 150 miles up. The missile used is called a Standard missile and is similar to one used in missile defense tests. The Navy has been particularly successful in such anti-missile tests, with about a dozen hits and one miss in the past several years.

How will it work?

What if it doesn't work?

Pentagon officials say they would try again in a day or two.

What are the chances of debris hitting anyone?

Pretty slim, since about three-quarters of the world is water and a small percent is inhabited. There are about 100 re-entries of space debris each year with few, if any, reports of injuries.

Why did the satellite break?

No one is saying publicly. Shortly after it was launched in December 2006 from Vandenburg Air Force Base in California, the intelligence community lost radio contact with the "imagery" satellite, which essentially takes high-resolution pictures and is about the size of a bus. The satellites cost hundreds of millions of dollars apiece. There are at least several other classified imagery satellites and some commercial ones in orbit.

What is the reaction from other countries?

China and Russia in particular are protesting the mission. They want a treaty that prohibits the weaponization of space, even though China a year ago shot down an old weather satellite, about 450 miles up, to test its anti-satellite missile. Experts like Joan Johnson Freese at the Naval War College say the mission clearly raises fears from both countries about the defensive nature of missile defense. Others say it could embolden these countries to beef up their own anti-satellite capabilities.

Does the United States plan to use the knowledge gained from this project for other endeavors?

The government has not really addressed this — they say the reason they are shooting down the satellite is safety. But many experts believe the United States would be able to glean a lot of information, from its sensors, about how to better use and develop anti-missile and anti-satellite weapons.