Accessibility links
Saxophones from Taiwan Aiming for the Pros Taiwan has etched out a reputation as a high-tech hardware store to the world. But this country of 23 million has quietly garnered a chunk of the world market in a very different product: saxophones. Taiwanese saxophones were once regarded as inferior, but now the industry is producing high-quality instruments.

Listen
Saxophones from Taiwan Aiming for the Pros 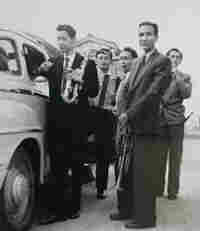 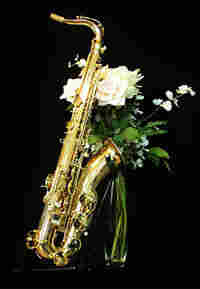 Taiwan has etched out a reputation as high-tech hardware store to the world. Its economy has boomed as companies churn out components for famous global electronics brands. But this country of 23 million has quietly garnered a chunk of the world market in a very different product: saxophones.

Virginia music store owner Kevin Landes plays a saxophone that dates back to 19th-century Paris. French saxophones are still the gold standard today. But the horn Landes is cooking on next wasn't made in France.

"You would never have thought of Taiwanese instruments trying to inch into the pro territory. But they are. And they are making some really nice horns."

They're making them at a gritty workshop in the town of Houli, in central Taiwan. Ten men and women huddle at their workbenches, silently adding hundreds of parts to perforated tubes of brass — the skeletons of alto saxophones.

Their progress is glacial. One worker dabs dots of glue to fingernail-sized pads of lambskin. Then he packs cushioning into round brass keys. Another worker attaches these keys to the tubes, positioning and then re-positioning them. A third worker thrusts a fluorescent light inside the brass tube, to scrutinize the handiwork. He depresses the keys and watches for telltale rays of light. If light escapes, the keys must be realigned.

While the work is slow and methodical, the owner of this company, Lien Cheng Saxophones, feels a sense of urgency. Chang Tsung Yao says, "Our quality is improving but if Taiwanese companies don't move quick, they will be left behind."

There are a dozen assembly lines — small, family operations like this one — throughout Houli. The town has a population of 50,000, but it produces about 40,000 saxophones a year.

Just how Houli became the world's unsung center of saxophone making is largely an accident of history. The story dates back to just after World War II. It stars a larger-than-life character named Chang Lien-cheng. He was a farmer's son who abandoned the family land to become a painter and jazz musician, says a spokeswoman for his company: "No one during that time was actually playing any kinds of Western instruments. But he was fascinated by this instrument called saxophone."

According to company legend, when Chang's saxophone was damaged in a fire, the inveterate tinkerer managed to build another. That was the first sax made in Taiwan.

Until his death several years ago, Chang trained a number of apprentices, and in the process, launched a lucrative export industry. By the 1980s, Taiwan was churning out so many saxes under contract to labels in the U.S. and Europe, the government estimates that 1 out of every 3 saxes in the world was made in Taiwan.

But then mainland China began ramping up its cheap saxophone assembly lines.

Virtually overnight, Taiwan's orders dwindled to a fraction of what they'd been. Half of Houli's workshops went under. Now, the surviving manufacturers are fighting back.

Their strategy is to stake out a middle ground between top brands like France's Selmer, or Yamaha of Japan, and the cheap mainland Chinese instruments. The Taiwanese government and the private sector are furiously investing in research and development, quality control and marketing.

The secret weapons in Lien Cheng Saxophones' battle for brand recognition are the founders' great-granddaughters, ages 15 to 22. They give demos in the store, and the family deploys them around the world to showcase the company's horns.

Taiwan's branding efforts are starting to pay off. Once limited to the inferior "student" market, Taiwanese firms now make higher-grade horns for famous European and American labels. Some companies are even selling instruments under their own brands.

But they know their prospects are flat unless they can makes saxes good enough to woo professional musicians like Richard Kleinfeldt, of the Washington Sax Quartet. "I must say, 25 years ago, I wouldn't have bought an instrument made in Taiwan. But now . . . in the last 10 years, they've really made improvements. I would consider it."