Accessibility links
Imam's Wife a Bridge Between Two Worlds Jerusha Lamptey is the devout wife of an imam in Virginia. She's also an American woman earning a Ph.D. who keeps up with pop culture. Lamptey may be a glimpse into the future — for American converts adapting to Islam, and Muslim women adapting to the U.S. 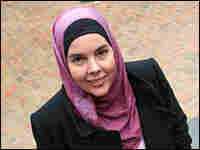 Jerusha Lamptey, who's pursuing her doctorate at Georgetown University, says she thinks people in her community will say, "She's an imam's wife with a Ph.D. And that … challenges people's perception." David Kidd hide caption 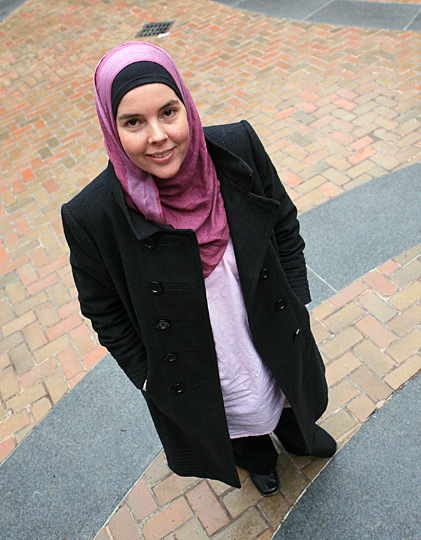 Jerusha Lamptey, who's pursuing her doctorate at Georgetown University, says she thinks people in her community will say, "She's an imam's wife with a Ph.D. And that … challenges people's perception."

As part of a series on the next generation of religious leaders, NPR has profiled Jerusha Lamptey's husband, Sheikh Rashid Lamptey, an imam at the Dar Al Noor mosque in Virginia. 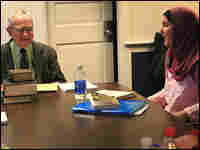 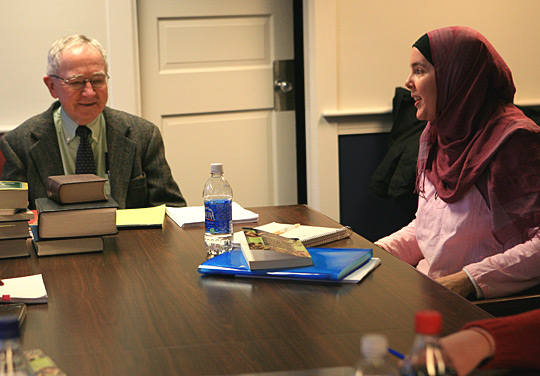 At noon on a recent Friday, the prayer hall at Dar Al Noor mosque in Manassas, Va., is filled with men kneeling shoulder to shoulder. Their eyes are closed, and Imam Sheikh Rashid Lamptey's haunting song invites them to prayer.

Walk up a flight of stairs and the scene changes: About three dozen women sit on the floor, nursing babies and grabbing toddlers as they careen around the room. They've donned head scarves. Billowing blue or black blouses cover their arms. Almost all the women come from Africa, the Middle East or South Asia.

Seemingly oblivious to the chaos, one woman cradles her little daughter. Dressed in flowing pink, she blends in.

Until she looks up. It is Jerusha Lamptey, the imam's wife.

"Just seeing me and seeing that I don't have an accent, that underneath the scarf, yes, I'm a white girl, and I know American culture, it is my culture — that breaks down walls that any amount of information can't break down," she says.

After the sermon, Jerusha Lamptey weaves her way through the crowd. Few people take note anymore; the largely immigrant congregation has grown accustomed to their imam's wife. That was not the case when Jerusha was first introduced to them.

"When I met her, I was expecting to see this woman that had like a burkha on — you know, from Ghana, you know what I mean?" says congregant Amalia Rehman, a convert herself who dresses in black robes and head scarf. "When I met her I said, 'What? That's his wife? I can't believe that!'"

Sometimes, neither can Jerusha.

Picking Up the Quran

Later that afternoon, we sit at the kitchen table in her Cape Cod-style home. Her 14-month-old daughter, Jalilah, plays nearby. Jerusha says that nothing in her past would have predicted a religious way of life.

"We never went to church," she recalls. "I don't remember ever going to church."

Jerusha, who grew up in Connecticut, came to believe religion was rubbish. Her father was a nominal Catholic, her mother, technically Protestant; Jerusha says that by the time she got to college, she was "antagonistic" toward the idea of religion.

Jerusha was drawn, however, to African culture. She traveled to Ghana during college and observed in her Muslim friends there an inexplicable serenity. Their lives conflicted with her stereotype of the oppressed Muslim woman. And so one day in college, she picked up the Quran.

"I went to read it to find all the bad things it said about woman," she recalls. "You know, women don't have any rights, and they can't do anything, and they have no value, and all these kinds of things. And I read it over and over and over again to see what it said, and I couldn't find any of the things that people would say. And so it became this journey and this test, and I got in over my head."

Jerusha discovered discrepancies between the way the Prophet Mohammed viewed women and how some conservative Muslims treat them today. She says the Quran wooed her with its notions of individual responsibility, ultimate justice, a personal relationship with God.

But it would take another five years before Jerusha made the leap of faith. It was March of 2000. She was living in Ghana as a Fulbright scholar, studying Islam, and she began to have dreams.

"I had one dream where I was standing outside of a mosque and crying," she recalls. "And then I had another dream where I was inside the mosque, and the feeling — I can't even describe it — everything was white, and bright, and this very peaceful feeling. And that solidified it for me."

Breaking the news to her family was a little less peaceful. Jerusha shudders at the memory of the conversation with her mother just after she returned from Ghana.

"Coming home from the airport, my mom was upset at me," she says, hastily adding that her mother is a "wonderful person."

"And she said, 'The next thing I know, you're going to convert to Islam!' And I was like, 'Well, I already have.' And she started crying, and it was awful. I hate to rehash it. It was horrible."

Jerusha's sister, Molly Naughton, says that at first, she saw the conversion as a rejection of the family — even though they weren't religious. "It wasn't about the religion. It was about making herself be different from us," Naughton says.

Over the next year, Jerusha's family grew accustomed to the rhythms of her faith — rising early, praying five times a day, fasting during Ramadan. Islam penetrated every part of her life — what food she ate and books she read, how she talked, even how she bathed.

But Naughton says it was the way Jerusha dressed — covering her hair and all of her body but her face and hands — that turned her private faith into a public matter.

"We go out places together and I will notice people looking at her," Naughton says. "And I want to say, 'What? What?!' And it just riles me up. This is my sister. She's not any different."

Jerusha says she doesn't really notice the looks anymore — besides, the scarf has its benefits. People generally treat her piety with respect, and men don't hit on her. Still, she says that because of that head scarf, she has become a public face of Islam.

Muslim men in the U.S. go under the radar, Jerusha says, but most Muslim women do not.

And ironically, this thoroughly American woman finds herself a minority in her own, sometimes hostile, culture.

What is it like being an American who converts to Islam in a post-Sept. 11 world?

Jerusha pauses. "I think people obviously want to know why you would convert to Islam. And people question your allegiance. I think that happens a lot — especially since it's a with-us-or-against-us mentality."

The Wife of an Imam

If becoming an outsider in her own culture was not enough, Jerusha Lamptey soon assumed a new role. She says she didn't see it coming.

"Oh God!" she laughs, "I never thought I would become the wife of an imam."

The journey from new convert to a central figure in a mosque began in Ghana. A few weeks before she completed her Fulbright scholarship, she happened upon a young, charismatic cleric named Sheik Rashid Lamptey. It started as a student-teacher relationship, she says, in which she chauffeured him to television stations for regular appearances.

Then in September 2002, Sheik Lamptey was invited to the United States. He stayed a few days at Jerusha's mother's home.

"He came in with that big, huge smile dressed all in pink!" Jerusha's sister recalls. "And she had this huge smile, and when he went outside, all of the staff was like, 'Ooh, Jerusha likes Sheikh!' She was like, 'No, I don't. No, I don't!' But it was obvious that she was smitten."

They married four years ago, after Sheikh Lamptey was offered a job as deputy imam at a mosque in Virginia. When he became the senior cleric at Dar Al Noor, he set about creating a new sort of mosque.

While the believers at Dar Al Noor are highly educated, most have come from countries where attitudes about women sometimes clash with American values. The imam ruffled feathers when he insisted that women pray in the same room as men and have seats on the executive committee. He also beefed up theology classes for women.

'This Is What I Stand For'

As the imam's wife, Jerusha is at the center of mosque life. Before her daughter was born, she showed up at every meeting and educational program.

As her daughter grows older, Jerusha and her husband are planning to expand the role of women. Sheikh Lamptey says his wife is Exhibit A.

"I think she's going to be a revelation and an inspiration for women," he says.

Women, he says, should be a central part of the mosque. "That is what I stand for. I want a community where the men stand shoulder to shoulder with the women to build a healthy and wholesome community."

Even before she converted to Islam, Jerusha Lamptey wanted to teach at a university. Eighteen months ago, she began studies toward a Ph.D. in religious pluralism at Georgetown University. As a Muslim woman, the degree now has symbolic significance, as well.

"I don't want to say I'm a model," she says, "but especially in the community, people know who you are. And I think as an imam's wife, they will say, 'She's an imam's wife with a Ph.D. And that ... challenges people's perception."

Jerusha Lamptey has been defying perceptions ever since she converted to Islam, says her sister, Molly Naughton. Jerusha is a traditional Muslim who prays and covers and lives for the glory of God — and an American woman who earns a doctorate in philosophy and keeps up with pop culture.

"My sister is a brilliant, amazing person, and you look at her and you think, 'She's covering her hair, and she's doing all these things.' But then, she'll call me up and say, 'Did you see what Justin Timberlake did?'"

And in this, Jerusha Lamptey may be a glimpse into the future — for American converts adapting to Islam and Muslim women adapting to America.