Accessibility links
A Palestinian Intifada Icon Chooses Art over War Zakariya Zubeidi, who once led the militant gunmen of the Al Aksa Martyrs Brigades in the West Bank city of Jenin, has put down his weapons. He says he now believes theater is the best way to push for Palestinian statehood. 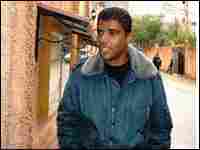 Zakariya Zubeidi, an icon in the uprising, or intifada, against Israel, says he now believes theater is the best way to push for a Palestinian state. Eric Westervelt, NPR hide caption 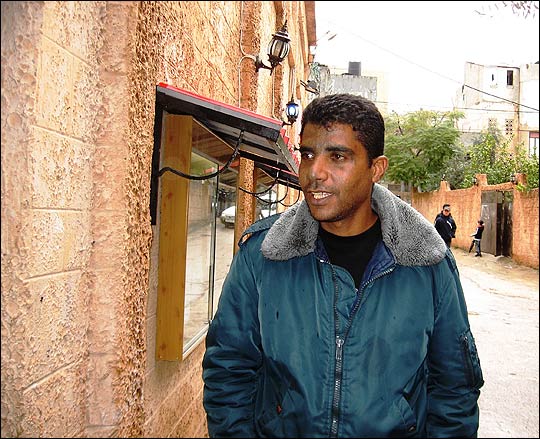 Zakariya Zubeidi, an icon in the uprising, or intifada, against Israel, says he now believes theater is the best way to push for a Palestinian state. 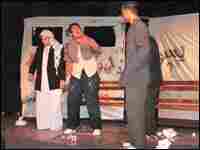 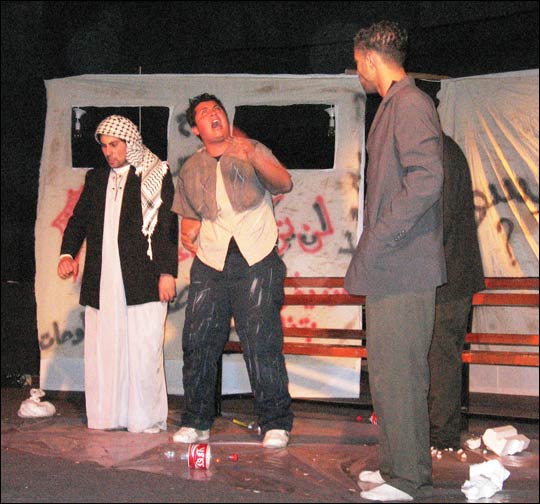 Actors perform "The Journey" on the stage at Freedom Theatre.

An icon of the Palestinian Intifada now says he believes theater is the best way to push for Palestinian statehood.

Zakariya Zubeidi once led the militant gunmen of the Al Aksa Martyrs Brigades in the West Bank city of Jenin — and for years, sat atop Israel's most-wanted list.

But he recently put away his guns under a controversial amnesty program, and then helped create a children's theater in his home town.

Talk of a Different Fight

Zubeidi sits on an office couch in the Jenin refugee camp's freedom theater near a Che Guevarra picture and blissfully lights a cigarette under a large neon "no smoking" sign. At 31, his still-boyish face is two-toned with burn marks from an explosion — scars from his years fighting Israel.

But his talk these days is of a different kind of fight.

"We, in Palestinian society, have lost culture, political culture and context," Zubeidi says. "As a resistance fighter, I felt I was missing culture and the depth of politics. So, unfortunately, all my resistance work was wasted. Therefore, I'm getting back to culture as my way of getting to resistance."

"We've besieged ourselves in Palestine," he adds, "and we have to stop blaming everything on Israel."

It's a remarkable turnaround for a man who used to sleep with his M-16 at his bedside. Zubeidi insists his path from the West Bank's best-known gunman to children's theater impresario isn't as odd as it might seem.

As a kid, he says, he loved to act in a theater here founded by an Israeli peace activist. Six of his friends from those youthful theater days are now dead.

"Theater is much more beneficial than a weapon that is aimless, that doesn't have a proper target. You know what happened in Gaza," Zubeidi says.

The Gaza comment is a reference to the bloody inter-Palestinian fighting last year in the Gaza Strip. Under an agreement with the Palestinian Authority, which now controls only the West Bank, Zubeiidi agreed to give up violence and put away his weapons.

After staying violence-free during a three-month trial period, Zubeidi and 30 other militants in the West Bank were recently removed from Israel's wanted list.

"The agreement entailed stopping all kinds of military work, and I did it because I saw that military work was getting us nowhere," he says.

Yet Zubeidi doesn't really trust the amnesty agreement — one result of a new round of peace talks with Israel. Fearful for his life, he still sleeps in a Palestinian government building in Jenin for protection. He could, in theory, return to his violent ways at any time, though he insists that is not his plan.

Zubeidi calls himself the theater's "idea maker and thinker." He also says he paves the way for social acceptance of the theater in this deeply conservative refugee camp.

These days, he spends his time reaching out to youth such as Ahmed al Roahk, a pudgy 19-year-old aspiring actor who idolizes Denzel Washington.

"I saw Denzel Washington in Malcom X, an amazing performance," Roahk says. "It made me want to be an actor."

Roahk says he also looks up to Zubeidi. He doesn't really find it strange that the man long wanted for allegedly organizing shootings and bombings is now a supporter of the arts.

"Zakaria has realized that a revolution and revolutionary behavior is not only through the use of a weapon. It is through reading and understanding and talking and through nonviolence.

The plays at Freedom Theater are not all about Israeli military checkpoints, roadblocks incursions and violence," he says.

To the delight of this day's packed audience of young schoolchildren, the play, "The Journey," pokes fun at a wildly popular Syrian soap opera called Bab al Hara.

Unpolished and homemade, most of the plays produced in this 300-seat theater explore inward-looking themes rarely discussed openly in Palestinian culture — works that shine a light on family tensions, domestic violence and social pressures. In "The Journey," Roahk, who plays a lead part, launches into a soliloquy about his abusive father.

"I want to spread the message that people should not be afraid to say what they think .. and through art, maybe they can do that," says Roahk, who's from this refugee camp. "The message of this play is that we can't blame the occupation for everything. Their violence stems from us, in part, from problems that we create."