Turkey's military sends troops and fighter jets into northern Iraq overnight. In Baghdad, Shiite cleric Muqtada al-Sadr announces he will order his powerful militia to continue its cease-fire for another six months.

On this Friday morning one part of Iraq is becoming more violent, even as another part welcomes a longer ceasefire. We're going to catch up on both developments. And we begin in Baghdad, one of the areas affected by the announcement of a Shiite Muslim leader. He says his powerful militia will stay quiet another six months.

NPR's Peter Kenyon is following the move by Muqtada al-Sadr. And, Peter, how significant is it for Iraq when Sadr says his troops will stay quiet?

INSKEEP: And we seem to have lost Peter Kenyon. Peter? Bare with us there. Okay. Peter Kenyon is gone. We're going to continue our discussion here. We'll tell you that the news is that Muqtada al-Sadr has extended a ceasefire by another six months. And this is seen by many analysts as significant, because Baghdad has become more quiet in recent months. And one reason is that Shiite Muslim militias have laid low. One of the most powerful militias is the one belonging to Muqtada al-Sadr.

We're going to try to get Peter Kenyon back. In the meantime, let's check in on the other development in Iraq - in Northern Iraq. Iraq's neighbor Turkey has sent troops across the border today. NPR's Ivan Watson has covered this region for four years - for several years, in fact. And, Ivan, what are the Turks doing?

The Turkish media is reporting up to 10,000 Turkish soldiers have moved a distance of about five miles into Iraqi territory. We haven't been able to confirm those numbers yet, because it appears to be in a remote area which is not heavily populated.

However, this advance followed hours of Turkish cross-border artillery bombardment yesterday, Steve, and a series of Turkish airstrikes, which the Iraqi Kurds say destroyed several important bridges. And it's important to note that at one location Iraqi Kurdish officials say their militiamen surrounded a column of advancing Turkish soldiers and tanks yesterday and, actually, after a very tense standoff, forced them to withdraw without firing a shot. So it shows how the tensions are mounting along the border there.

INSKEEP: Who are the targets of the Turkish troops?

WATSON: Well, the Turks say they're going after the PKK, which is a Kurdish separatist group, guerilla group, that has fought the Turkish state now for about 25 years, and they're operated out of camps on the Iraqi side of the border. And the Turks have been conducting airstrikes since last December with, it seems, American approval. However, the Iraqi Kurds are arguing that the Turks are using the PKK as a pretext to threaten the Iraqi Kurdistan region.

It's interesting that even though the Turks, earlier this week, announced the support for the independence of Kosovo from Serbia, the Turks are still adamantly opposed to any move by the Iraqi Kurds to declare their independence from Baghdad.

INSKEEP: NPR's Peter Kenyon is back with us from Baghdad. And, Peter, let me ask about what's happening in northern Iraq. What are officials in Baghdad saying about this incursion into their country?

KENYON: Not an unusual thing. But so far on the incursion it's been mostly silence from the Iraqis, though we did get a notice from President Jalal Talabani's office. He is an Iraqi Kurd. But he spoke with the Turkish president yesterday and did accept an invitation to visit Turkey in the near future. And the fear, of course, is that any clash could widen to include Iraqi Kurdish forces. So that's what we're watching very closely.

KENYON: It's mainly a mood of relief. They'd been hoping and expecting this to be extended. And that gives real hope for some national reconciliation, if Iraqi politicians can get their acts together this spring and summer.

Powerful cleric Muqtada al-Sadr said Friday he was extending a cease-fire of his Shiite Mahdi Army militia for another six months, according to a statement read on his behalf in several mosques.

"According to an order by Sayyid Muqtada, activities of the Mahdi Army will be suspended ... for another six-month period," al-Sadr's aide, Hazim al-Aaraji, said, using an honorific for al-Sadr during his sermon at the Kazimiyah mosque in Baghdad.

Al-Sadr's initial six-month ceasefire is widely credited with causing a marked decrease in attacks on U.S. and Iraqi forces and in sectarian violence that has killed thousands of ordinary Iraqis.

The U.S. military welcomed initial word of the decision, but pledged to continue cracking down on what it calls breakaway factions that persist in violence.

"Those who continue to honor al-Sayyid Muqtada al-Sadr's pledge will be treated with respect and restraint," it said in a statement.

Al-Sadr called the cease-fire after deadly clashes in late August between his militia, Iraqi forces and the Supreme Islamic Iraqi Council, a rival Shiite faction, in the city of Kerbala. The U.S. military has blamed the Mahdi Army for fuelling a cycle of sectarian violence with Iraq's Sunni Arab minority in 2006 and 2007. 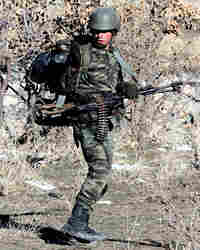 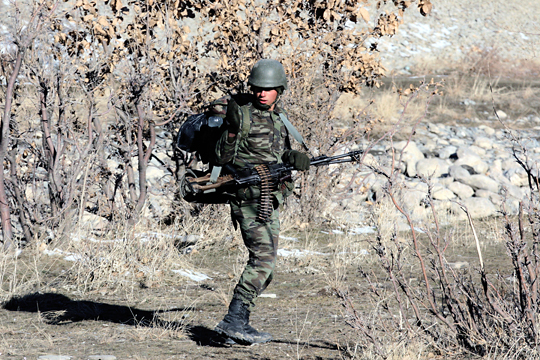 A Turkish soldier patrols an area near Sirnak. "The target, purpose, size and parameters of this operation are limited," Turkish Prime Minister Recep Tayyip Erdogan said.

Thousands of Turkish troops have crossed the border into northern Iraq in pursuit of Kurdish rebels, the military said Friday, in an operation officials said would last 15 days.

Turkish television placed the size of the force at 10,000 and said it had penetrated six miles into Iraqi territory. The Turkish military said its ground assault would be supported by warplanes.

The incursion, which Turkey has said is aimed only at the separatists, is the first such operation since Saddam Hussein was toppled in 2003. Despite Turkey's assurances, it raises concerns about triggering a wider conflict in the region.

Pentagon spokesman Bryan Whitman said the United States "wants the Turkish government to bring any ongoing operations to a swift conclusion." Meanwhile, the White House said it a statement it wanted to see "precise" targeting of the PKK, so as to avoid civilian casualties.

Turkey has conducted air raids against PKK guerrillas in northern Iraq since December, with the help of U.S. intelligence. It has periodically carried out so-called "hot pursuits," in which Turkish forces are given the green light to cross the border in small units for a limited amount of time.

The Kurdish militants are fighting for autonomy in Turkey's predominantly Kurdish southeast, and have carried out attacks on Turkish targets from bases in northern Iraq. The United States and the European Union consider the PKK to be a terrorist organization.