Accessibility links
Jonny Greenwood: Where Oscars Fear to Tread "Henry Plainview," from the Radiohead guitarist's score for There Will Be Blood, is the stuff of what philosopher Edmund Burke called "the sublime": art that has the power to destroy. It's hard to imagine the film's Henry Plainview without "Henry Plainview." 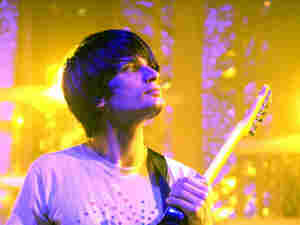 The film There Will Be Blood tells the story of a ruthless oil prospector named Daniel Plainview, whom director Paul Thomas Anderson ambiguously praises and condemns throughout. Anderson's inspired choice for his score's composer was Radiohead guitarist Jonny Greenwood, whose previous soundtrack for Bodysong explored the musical extremities of the human condition. Greenwood is a modern-day John Cale, studying first in classical composition before moving into rock and then seamlessly commingling and alternating styles.

It marked a bit of a shock when the Academy disqualified Greenwood's harrowing soundtrack from Oscar consideration. According to the Academy, roughly 46 minutes of pre-existing work (including selections by Arvo Part and works in the public domain) is contained within the film, though none of it is released on the official CD soundtrack.

The setback is both unfortunate and unfair. The soundtrack perfectly exemplifies the main character, the cinematography, and the film's structure all at once. Unlike The Shining's horrifying soundtrack, which brilliantly forced tension when there was none onscreen, Greenwood's claustrophobic arrangements (and the other selections) bring the tension right where it belongs.

The Shining actually provides a good reference point to understand "Henry Plainview," excerpted from Greenwood's BBC-commissioned Popcorn Superhet Receiver suite. The guitarist has long acknowledged the influence of Krzysztof Pendrecki's early atonal works — pieces of Utrenja were used to frightening effect in the 1980 thriller. Greenwood composed the entirety of Popcorn Superhet Receiver by layering himself on violin, each part forming a cluster of notes; on the excerpted "Henry Plainview," these clusters are crushed by glissandos falling like angels from paradise. It's the stuff of what philosopher Edmund Burke called "the sublime": art that has the power to destroy. Even though it had been written beforehand, it's hard to imagine the scheming "half-brother" Henry Plainview without "Henry Plainview," a devastating character portrait clutched in its namesake's blood- and oil-soaked hands.