Accessibility links
A Donkey's Tale: When Urban Sprawl Encroaches Sweet Water Red Gambler was forced out of Golden Valley. The donkey's crime? Nocturnal braying that kept a neighbor up. Now, anyone who wants to move into this suburb near Reno is warned in advance about the smells and sounds of its chickens, goats and horses. Residents hope the disclosure will help protect their rural lifestyle. 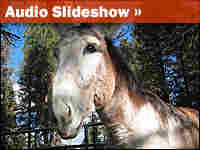 The Bray that Ignited a Community

Wherever city meets country, clashes develop over animals. Urbanites transplanted to rural areas often find the sounds and smells of livestock offensive, while many longtime residents contend that farm animals give rural areas their charm.

This is the story of one urbanizing community's attempts to save its rural character in the face of suburban sprawl. The result was an innovative policy to protect livestock ownership. The inspiration came from a donkey.

His name: Sweet Water Red Gambler. He's a mammoth jack — a large male donkey — with a coat that's a mixture of cinnamon and white. He was born in Tennessee, but as a young animal, he went West, to Nevada.

"We bought Gambler seven years ago," recalls Nancy Bonham. She and her husband, Lee, bought the donkey as both a pet and a work animal. They were planning to breed mules on their 4-acre property, which was zoned as agricultural land.

"We could have horses, cows, pigs, dogs, goats, whatever we wanted — I mean, within limits on 4 acres — without any restrictions," Nancy Bonham says.

Now, where they live is not farmland. Golden Valley, Nev., is a residential area just north of Reno. It's a cluster of homes in high desert. But if you were a donkey, you would think this would be a good place to live. Most everyone in Golden Valley has animals: chickens, goats, horses, llamas, dogs.

So the Bonhams figured their donkey would fit right in. And he did fit in, for about a year and a half, until a neighbor's complaints landed them in county court for violating a noise ordinance.

The neighbor, Bill Calvert, declined to talk for this story, but he testified in court that Gambler's braying kept him from sleeping on a regular basis.

Other neighbors testified for the defense. They said Gambler's braying sometimes forced them to shut windows at night, but they didn't consider him a nuisance.

And defense attorney Stephen Moss argued that braying was allowed.

"Because this is a permitted agricultural activity — that is, raising livestock, specifically donkeys — the complaint is not well founded and should be dismissed," he said.

But Judge Harold Albright didn't buy it. "People ought to be able to sleep in their houses," the judge said. "I don't think the whole neighborhood has to close their windows and buy fans and sit in their house so you can have a donkey."

"I can sentence you up to six months in jail and a $1,000 fine on these matters," Judge Albright warned the Bonhams. In the end, he assessed a fine of only $170, but he threatened far heftier punishment if Gambler ended up back in court.

"My lawyer was in shock," Nancy Bonham says.

The community was shocked, too. "Anybody that had animals said, 'Oh, my God. What are they going to do?'" recalls Golden Valley resident Neal Cobb, who owns horses. "This was some scary business for all of us."

Sarah Chvilicek, who headed a citizen's advisory board for Golden Valley and nearby communities, heard from a lot of animal owners. "They were saying, 'Wait a minute, we have our horses here, we have our cattle here, we have our goats, our pigs, our lambs, our peacocks, our dogs and cats. And if someone complains about a braying donkey, then what's next?' "

They feared a flood of complaints. Nevada is, and was, the fastest growing state, and the sprawl of Reno was swallowing Golden Valley. Old-time residents worried that newcomers would try to drive the animals out. So livestock owners decided to fight back.

Residents approached the county. They said they wanted to find ways to preserve the area's rural character in the face of growth, and they came up with a new policy that aims to do that.

According to the policy, anyone buying a new home in a new subdivision must be informed of the existence of noise and odor from livestock in the community.

"It's in the form of a disclosure at time of sale," explains Washoe County planner Eric Young, "that there may be donkeys braying and you may smell their manure, and that a rooster may wake you up in the morning."

Residents hope this disclosure will serve as a repellent — a warning sign that will keep those who don't like animals out of Golden Valley. And if people do move in and then complain about animals, residents hope those complaints will carry less weight. After all, newcomers can't say they weren't warned.

The policy is so new, no one yet knows how effective it will be, but agricultural law expert Neil Hamilton of Drake University in Des Moines believes Washoe County's new policy is worth watching.

"It's certainly interesting," Hamilton says. "It's a good example of a homegrown democracy-type idea: 'Well, we ought to protect ourselves.' But this type of ordinance wouldn't necessarily prevent a nuisance suit."

He explains that the essence of nuisance law is "reasonableness," and what's reasonable can change as the land changes. In other words, even with the new policy in place, Golden Valley's livestock owners may have a hard time convincing a judge that animal noises are reasonable as the community becomes more suburban.

Which brings us back to Nancy and Lee Bonham and their donkey, Gambler. After they lost in court, the Bonhams believed they had no choice but to get rid of Gambler. Lee Bonham says between the legal fees and the failed mule-breeding business, he lost a lot of money, so he has devised a new plan for profiting off his 4-acre property.

"I may subdivide it and put two houses in here," he says. He recognizes the irony — that after all the work to protect livestock ownership in Golden Valley, he may end up undermining those efforts — but he says that's his financial reality.

As for Gambler, he now lives more than an hour's drive from Golden Valley. The donkey's new home is in the mountains, where it's still rural, and where there's no one around to complain.

More on the Shifting Ground Series