Accessibility links
Dear Oscar Nominees: We're Sorry We Missed You Just one of the year's Best Picture nominees — Juno — has rung up much box-office business. Writer Linda Holmes offers gentle apologies to the Oscar-nominated films she meant to see but didn't. 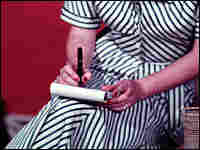 I always feel guilty about the Oscar-nominated movies I didn't get around to seeing. This time of year, I find myself yearning to revoke my decisions to see films like The Kingdom. And Evening. And, um, Live Free Or Die Hard.

But regret (like Live Free Or Die Hard) is largely pointless. I can only apologize profusely to those I overlooked. I don't have an excuse. Though come to think of it, lots of other people seem to: Best Picture nominee There Will Be Blood has grossed what, $32 million? Meaning roughly 99 percent of the population has no idea just how baroque it is? Whatever: I will now make explanations, or apologies, or something to the following:

Dear No Country For Old Men: You're the only Best Picture nominee I didn't see. Candidly, the problem was the words "cattle-killing bolt gun." If it were just a gun, or just a bolt gun, we might have come to terms. But "cattle-killing bolt gun" conjures up certain images, including one of me in a theater seat with my coat over my head.

Further, I admittedly fell for the hype proclaiming, "'If you only see Josh Brolin shoot one dog this year, make it the dog in American Gangster." I am with you in spirit; having attended 7th-grade dances in 1984, I, too, associate bowl cuts with a sense of foreboding. Nevertheless, I was unable to overcome my fear of bolt guns and my love of cows.

Dear The Diving Bell And The Butterfly: When choosing films, I consider whatever information I have about the film's director, actors, script and proximity to public transportation. Tragically, several sessions of weekend track work on the Queens-bound G line conspired to keep us apart. Also: you are in French.

Don't misunderstand: I don't have a lazy American's fear of subtitles. On the contrary, I have four years' worth of moldering high-school Spanish, which distracts me during any French film by recognizing, at random intervals, a French word similar to a Spanish word it once learned during a story about Roberto's visit to the library. I stop to wonder whether I've correctly identified the French word for "book," and I lose my place.

Dear Sweeney Todd: As a rule, I embrace musicals, barbers, makeup, Johnny Depp, Stephen Sondheim and certainly vengeance. It's hard to imagine what could have gone wrong between us. Was I afraid that I'd never want to have my hair cut again, just when I'd found a good salon? I like to think I'm braver than that. (But then: "cattle-killing bolt gun.")

Have I come to dread Helena Bonham Carter, perhaps because American cinema has so effectively taught me the lesson, "Thou shalt dread Helena Bonham Carter"? Perhaps the icy, slate-gray palette of Tim Burton's London was too much at Christmas, when combined with the icy, slate-gray palette of New York. I am sorry. I ask only that you not kill me and bake me into a pie.

Dear The Assassination Of Jesse James By The Coward Robert Ford: I'm not afraid of long movies. I saw There Will Be Blood at the theater with the more comfortable seats, because I'd heard that by the time Daniel Day-Lewis swallowed his last bite of scenery, I'd be ready to stretch my legs. But even the ambitious span of your title conveys such commitment to the thoroughly Western ideal of moseying that I was afraid I'd have to get up and walk around every half-hour, like on a flight from New York to Paris. In 2007, I enjoyed Casey Affleck in Gone Baby Gone (and Brad Pitt in a deluge of blurred family photographs). I fear, though, that when I enjoy you on DVD, it will be only with a lunch break in the middle.

Dear Charlie Wilson's War: There are ideas I can get on board for. "Amy Adams used to be a cartoon, and now she is climbing out of a manhole" is one of them. "George Clooney: Washed-up Loser." Even "Confronted with international terrorism, the American military turns to Jamie Foxx."

Still, even I choked on the idea that covert military operations could be spearheaded by people who bought their southern accents at the Drawls 'N' Such outlet store outside Atlanta. You put Julia Roberts in wigs too old for her, and you put Tom Hanks in a jacuzzi too young for him. Also: If I want to see Philip Seymour Hoffman be better than anyone else on the screen, I can watch anything else he appeared in this year.

Linda Holmes is an editor at Television Without Pity, which sometimes stretches its legs to make Oscar predictions, to fantasize about turning movies into TV shows, and to grouse about who got overlooked in the nominations.