Accessibility links
New Roads in the Amazon May Deliver Disease Cutting down forests in the Amazon destroys a natural means of absorbing carbon dioxide. But new roads in the jungle also create new pools of standing water — ideal breeding grounds for malaria-carrying mosquitoes.

Listen
New Roads in the Amazon May Deliver Disease 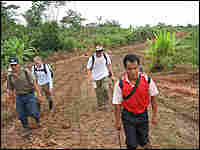 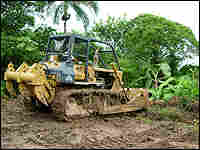 A bulldozer at the end of the path is responsible for turning the quiet footpath into a wide, muddy road ready for paving. Pablo Yori hide caption 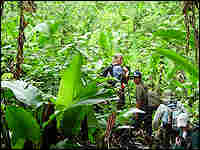 The going is slow in the dense jungle, and the team is plagued by mosquitoes and heat. Pablo Yori hide caption 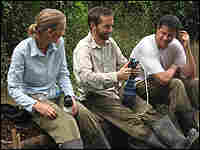 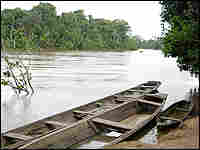 A sight for weary eyes, boats await to carry the team home. The researchers will return in the future to study malaria-carrying mosquitoes. Pablo Yori hide caption

Nearly one-fifth of the Amazon rainforest has disappeared since 1970, its loss spurred by construction of roads through pristine areas. The loss of the trees is a big blow to the world's carbon balance, and a real force in climate change. And, according to three researchers from the Johns Hopkins Bloomberg School of Public Health, road construction in places like the Amazon might also be a blow to human health.

New roads promote deforestation. A recently published survey of the Peruvian Amazon by Paulo Oliveira of the Carnegie Institution of Washington and several colleagues shows that 75 percent of the forest disruption that occurred between 1999 and 2005 occurred within 12 miles of a road. And deforestation promotes malaria — researchers Amy Vittor and Jonathan Patz surveyed a newly constructed road and reported in 2006 that the areas along the road that had suffered more deforestation also suffered more malaria.

The Hopkins researchers want to follow the development of a road in real time. So they're surveying an area where the government is about to put in a highway. The road will go from the frontier river village of Mazan, through the Amazon jungle, to the city of Iquitos.

The researchers are infectious-diseases experts Margaret Kosek, a physician and former ultimate Frisbee player, and her husband, Pablo Yori. Yori is a gentle Spaniard, also an infectious-diseases expert. He keeps everyone going by carrying much of the gear. And there's biostatistician Bill Pan. Biostatisticians usually spend their time in front of computers. But Pan is outfitted for the jungle in a worn T-shirt he got when he was head of the cheerleading squad at Boston College. His six-foot two-inch frame is topped by a slouchy safari hat in camouflage colors.

Right now, the only route out of Mazan is by boat. The new road will bring in cars and trucks and people. The Hopkins team wants to see what this will do.

"I want to know how malaria is going to be affected by road construction, change in ecology, things like that," Pan says.

The researchers figure this walk will take two days. It's a guess. Pan has brought the only maps they have — Google Earth photos from 2003.

"Today, the main goal is to map out the road, because we don't have any electronic data," he says.

Off the Path and Into the Woods

The path out of Mazan threads past ramshackle brown plank houses, bright green grass and banana trees. There's already a manmade red clay gash where the road is going to go. The clay sucks at the researchers' boots.

They've been this far on other trips.

"It was a footpath before," Pan says. But now, he says, "you can see the tractor lines in the dirt."

Within minutes, they get to the two-story, bright yellow bulldozer responsible for turning the quiet footpath into a wide, mucky red path.

Pan has mixed feelings about the road development.

"The forest has a natural beauty to it and creating a road just ruins it," he says. On the other hand, he's talked to plenty of people who live in the area who see the road as progress.

But the road could also increase the number of mosquitoes that carry malaria.

"When roads are built, you can have culverts being formed along the road, little pools of water, streams and ditches," Pan says. These are ideal places for mosquitoes to lay their eggs.

And of course, the road will bring outsiders to villages that have been largely isolated.

If these newcomers carry malaria, mosquitoes could bite them, pick up the parasites and infect new victims.

At the end of the cleared path is a field of 10-foot-high, razor-sharp, chartreuse grasses. The two Peruvian guides whack a track with machetes. It's getting hot and muggy, and Kosek pushes everyone to keep hydrated.

The path looks a little easier in the jungle, and it's shady there. But the going is dense — the trees grow close together. Giant ferns struggle in the few spots of light. "This is the thick jungle right here," Pan says.

All the water bottles are empty now, so the scientists stop at a small dark pool and pump water through a filter. It's cool and good, but the stop gives a chance for mosquitoes to gather. It's fresh blood, and the mosquitoes are more than happy to take advantage of it.

"We're getting malaria ourselves," Pan says.

On their next trip through, the team will check how many of these mosquitoes actually do carry malaria.

With the mosquitoes and the close-set trees in the jungle, walking along the path where the road will be seems like a better idea. But it's not. The government cut trees along the planned highway route but has left them lying about like giant pick-up sticks. Every two or three steps, there are trunks and branches to climb over or under. And black clouds are racing in.

They set up camp in a clearing that looks like it once had been a village. But there's no one here now. In fact, they haven't seen anyone on the whole trip. No one could tell the researchers about their experiences with malaria or any other diseases.

Tents go up just in time. But Pan is trying out a tarp. "This is a good test to see if my tarp works," he says.

It doesn't. It leaks. Pan moves into Kosek and Yori's two-man tent, but it's too crowded. He ends up back under his leaky tarp.

The next morning Pan stands by the campfire, in shorts. "I'm drying my pants because they're very wet," he says.

The Route to Iquitos

The Hopkins researchers hope the discomforts will be worth it. If they can unravel the health effects of building roads through the jungle, they may find ways to prevent some of the problems. Because whatever the negative effects on health, on the forest, and on the atmosphere, there are benefits to a road.

But this morning, the challenge is just getting to Iquitos.

"Yesterday we walked 14 kilometers, and today we have to walk 28," says Pan. "So it's going to be a tough day today."

It is tough. More downed trees, more heat. Everyone is exhausted.

And then the guides find a well-worn path leading down to the river. The researchers decide enough's enough. Yori calls his office on his cell phone — service in Mazan just started a week previously. And he orders up a boat.

The walk down to the dock is easy. There are cleared fields and, for the first time, people. Farmers come out to see the strangers. The farmers say they're looking forward to the road. It will provide construction jobs, and it will help them get their goods to market.

Even though the hikers didn't make it all the way to Iquitos on foot, Bill Pan is satisfied with the trip. He's learned enough to plan the next steps of their work.

"I learned that the parts of the road that look on the satellite image as cleared are actually not as cleared as it appears. And there's not as many communities as we had thought there might be," he says.

When they come through next time, they'll be looking more at mosquitoes than at people. And instead of walking, they'll go by boat.