Accessibility links
A Drive to Achieve the Extraordinary The Guinness World Records book fascinated Juliet Frerking when she was a child. Beyond the oddball accomplishments it listed, the book inspired Frerking to attempt feats in her own life that people told her were impossible. 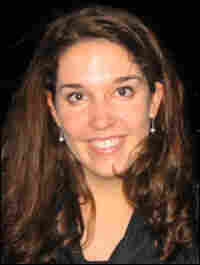 Juliet Frerking graduated from Stanford University in 2005 with honors in international relations and a minor in Arabic language. Last year, she conducted research in Tunisia under a Fulbright Fellowship. Frerking currently lives in New York City. Courtesy of Juliet Frerking hide caption

I believe in the challenge to accomplish something out of the ordinary. I have to confess that I acquired this belief from the Guinness Book of World Records. That book showed me the value of equal opportunity and competition. It proved to me, early on, that I could rise above anonymity and achieve remarkable things.

When I was 9, I used to huddle in the back of the library with my friend Leanne, and we'd turn the 1991 edition of the Guinness book's pages with purple hands sticky from raspberry Laffy Taffy. Reassured by Mrs. Balanoff, our third-grade teacher, that we could be anything when we grew up, we felt challenged by 320 pages of incredible feats. And so, with the obsessive focus of 9-year-olds, we assumed the daily task of finding our place in the universe.

The Guinness Book of World Records taught me to believe in the accessibility of the improbable. I was captured by the little bit of fame conferred by inclusion in that book: the fastest, the longest, the widest, the most — whatever you can imagine. It opened up the possibility of what I might be able to do.

I was attracted to the lure of the unusual. How long would it take to grow my fingernails to beat a record for a total of 14-feet, 6 inches? I bet our teachers never thought the equation "d=rt" would be used to figure that one out; or that we would be tempted to research everything about Namibia because it was home of the world's fastest caterpillar. Leanne settled on holding her breath for the longest time, and I decided to make the world's largest cookie. Thus, Leanne joined the swim team, and I gained 10 pounds.

The Guinness book taught me tenacity and perseverance and, more importantly, the desire to do something unexpected. So many people in the book were mocked by family and friends for what they were doing, yet they did it. I see them as success stories — the normal people who did something extraordinary.

In college, I decided to study Arabic before Sept. 11. I am not Muslim or of Arab descent; I am a Southern Baptist girl from Texas. Enticed by the sounds of elongated alifs and lams, I fell in love with the complexity of the language and the beauty of its slanting script. After graduation, to put my skills to use, I moved to Cairo, and then to Tunisia, where I just finished working with divorced women.

I am not saving the world, I am not the best at what I do, but I am only 24 — there's still time. The Guinness book helped give me new perspective on the impossible and instilled in me the desire to try something unconventional. I believe in making the implausible a reality, and I hope to someday break a few records myself.