Accessibility links
Watching Democrats Debate in a Texas Taco Bar It's a good bet that voters in Ohio and Texas had a close eye on Thursday night's debate between Sens. Hillary Clinton and Barack Obama. The states' primaries are on March 4. Some die-hard, mostly female supporters of Clinton watched the debate at a taco bar in Austin, Texas.

It's a good bet that voters in Ohio and Texas had a close eye on Thursday night's debate between Sens. Hillary Clinton and Barack Obama. The states' primaries are on March 4. Some die-hard, mostly female supporters of Clinton watched the debate at a taco bar in Austin, Texas.

After losing 11 straight contests to Barack Obama, Hillary Clinton has a lot riding on the outcomes of the Texas and Ohio primaries next month. She's counting on the support of female voters.

In the states where she has won, so far, Clinton has also won the majority of women's votes. And in Austin last night, women at a Clinton campaign debate-watching party showed no signs of wavering support despite her string of recent losses.

INA JAFFE: It may be too simple to say that women support Hillary Clinton just because she's a woman, but the identification that they feel when they see her and hear her is really very profound, says former Texas state lawmaker Ann Kitchen.

Ms. ANN KITCHEN (Former Democratic State Representative, Texas): I see in her something of myself, because she understands what I deal with everyday because she has dealt with it, too. I want a leader like her.

JAFFE: Kitchen's friend, businesswoman Ally Gallagher(ph), said women support Clinton because of the issues, too, and her understanding of the special impact on women.

Ms. ALLY GALLAGHER (Businesswoman): The economy is the problem, but still women are earning 77 cents on the dollar. If it's a recession for them, believe me, it's The Depression for us.

JAFFE: Gallagher and Kitchen were at Guero's Taco Bar with about 200 other die-hard Clinton supporters. There were a lot of men among them, but they were outnumbered. The crowd focuse on the big screen TVs, swig margaritas and beer from the bottle as if they were watching the SuperBowl, not a sober discussion of health care and diplomacy. And they treated Clinton's accusation that Obama had cribbed some lines in his stump speech from one of his endorsers, like it was the play of the game.

Senator HILLARY CLINTON (Democrat, New York; Presidential Candidate): If your candidacy is going to be about words, then they should be your own words.

JAFFE: The crowd cheered on Hillary Clinton and attempted to chat when Barack Obama spoke. During the break, two attorneys, Janet dela Cruz(ph) and her sister, Nelly Orera(ph), gave their assessment of the Illinois senator right from the Clinton campaign talking points. He is not ready to be president. She is.

Ms. NELLY ORERA: Eventually, perhaps, it may be his time, but this country cannot afford to waste any time for someone to get used to the job.

JAFFE: Though as much as they admire Hillary Clinton, dela Cruz and Orera said they know there are some men who just aren't ready to vote for a woman for president.

Ms. DELA CRUZ: I think that's very threatening to a lot of males, whether they want to admit that or not. I still think that's the case.

Ms. ORERA: OH, I think I agree with what my sister said. I think it's unfortunate because they can't get past that feeling of - feeling threatened to listen to the message, to listen to the solutions that she's proposing. And that just hurts.

Ms. DELA CRUZ: The bottom line is it just hurts.

JAFFE: The debate ended, but the views in this room were unanimous. She was brilliant, of course. Ann Kitchen still thought Clinton could recapture the momentum in the race.

Ms. KITCHEN: I don't think you could count this as the number of contests she has lost. You know, that's the thing about a race like this - people forget the whole picture. She did fabulous on Super Tuesday.

JAFFE: And Ally Gallagher was betting that Clinton would win Texas.

Ms. GALLAGHER: If I had to pick which side I'd like to have right now, I'd take her side.

JAFFE: If Hillary Clinton does win Texas, it will be partly because of the efforts of the people in this restaurant. And about an hour after the debate, the candidate herself came by to show her appreciation.

Sen. CLINTON: We can do this. We will do this.

JAFFE: And as the crowd pressed against the tiny stage, a chant went up.

JAFFE: Madam president, they shouted, words more sweet and intoxicating than the margaritas they raised to toast to her. 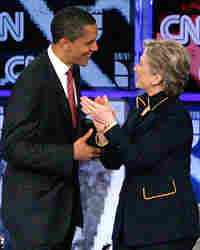 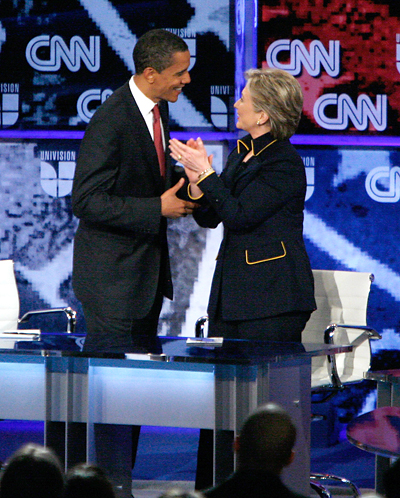 Democratic presidential hopefuls Sen. Barack Obama and Sen. Hillary Clinton speak after participating in a debate at the University of Texas on Thursday.

Illinois Sen. Barack Obama and New York Sen. Hillary Clinton debated Thursday night in Austin in an exchange that shifted from civil to contentious and back again.

In 11 days, Democratic voters in both Texas and Ohio will go to the polls in what are widely viewed as do-or-die primaries for Clinton. She has now lost 11 contests in a row and trails Obama in money, delegates and momentum.

After 45 minutes of polite exchanges with little disagreement about immigration, the economy and the new leader of Cuba, Clinton was invited to repeat what she has been saying for weeks on the stump: Her opponent is all talk and no action.

"There are differences between our records and our accomplishments. I have to confess, I was somewhat amused the other night when, on one of the TV shows, one of Sen. Obama's supporters was asked to name one accomplishment of Sen. Obama, and he couldn't."

Obama defended himself by saying, "Sen. Clinton of late has said: 'Let's get real.' The implication is that the people who've been voting for me or involved in my campaign are somehow delusional."

He continued, "You know, the thinking is that somehow, they're being duped, and eventually they're going to see the reality of things. Well, I think they perceive the reality of what's going on in Washington very clearly."

Obama was also asked about a charge that he plagiarized lines from speeches of Massachusetts Gov. Deval Patrick — something the Clinton campaign has been pushing hard.

"The notion that I had plagiarized from somebody who was one of my national co-chairs, who gave me the line and suggested that I use it, I think, is silly," he said.

Clinton came back with a zinger. "You know, lifting whole passages from someone else's speeches is not change you can believe in. It's change you can Xerox."

The audience booed her.

She also explored another line of attack that she has been using on the stump against Obama — that only one of them is ready to be commander in chief. She cited her time as first lady and her service in the Senate as her qualifications.

"What I mean is that, you know, for more than 15 years, I've been honored to represent our country in more than 80 countries, to negotiate on matters such as opening borders for refugees during the war in Kosovo, to stand up for women's rights as human rights around the world," she said.

Obama cited his judgment as his qualification. "What I believe was the single most important foreign policy decision of this generation — whether or not to go to war in Iraq — I believe I showed the judgment of a commander in chief. And I think that Sen. Clinton was wrong in her judgments on that."

Clinton needed to do something that would blunt Obama's momentum after 11 straight victories. She is still leading in the polls in both Ohio and Texas but not by much, and her lead is shrinking.

At the end of the debate, Clinton seemed to acknowledge for the first time the possibility that she might not be the nominee.

"And, you know, no matter what happens in this contest — and I am honored, I am honored to be here with Barack Obama. I am absolutely honored," she said.

Clinton turned to Obama and reached out to shake his hand. It was gracious and warm, and if it didn't change the dynamic, it did get her a standing ovation.

Clinton still has one more opportunity to go face-to-face with Obama before the March 4 primaries. The two candidates will meet for another debate on Tuesday in Cleveland.