Accessibility links
David Keene: McCain Must Prove GOP Allegiance John McCain will have to prove to the conservative base that he doesn't want to remake the Republican Party to win the GOP's full backing in the presidential election, says David Keene, chairman of the American Conservative Union. 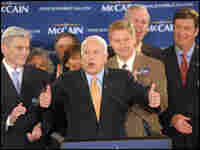 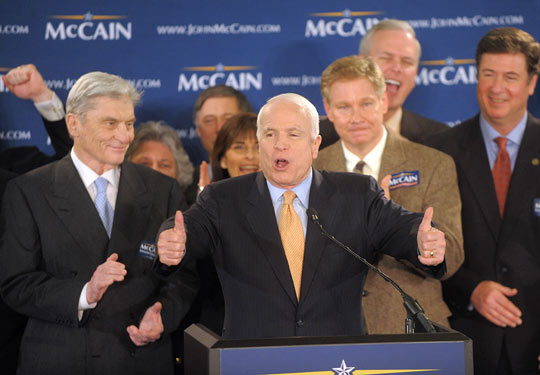 David Keene Commentary from 'The Hill'

From the NPR News Blog

John McCain will have to prove to the conservative base that he doesn't want to remake the Republican Party to win the GOP's full backing in the presidential election, says David Keene, chairman of the American Conservative Union.

The group has rated members of Congress since 1971. A lawmaker with an ACU rating of 80 or above is considered a conservative. With a lifetime rating of 82.3 percent, McCain would rate "on the lower level of what we would consider to be conservative," Keene tells Steve Inskeep.

But the Republican presidential front-runner's most recent rating, in 2006, was 65.

McCain drew conservative opposition because of his vote against President Bush's tax cuts in 2001 and the Arizona senator's support of immigration reforms that included a way to citizenship for illegal immigrants.

"But I don't think when conservatives look at John McCain, it is simply his voting record," Keene says. "It's more than that that's caused problems. For a long time, his position and the position of his staff was that he didn't have a problem with conservatives. He had a problem with some inside-the-Beltway conservative leaders....

"If he's learned anything from the primary process, it has to have been his problem is not inside the Beltway. His problem is with Republican primary voters who describe themselves as conservatives," Keene says.

"There are a lot of people out there who are not yet comfortable with John McCain as their party's standard-bearer."

"It's not simply his positions A, B and C," Keene says. "It's a sense that conservatives have gotten over the years that he doesn't like them.... And that's created a queasy feeling about him that they haven't overcome. He can overcome that. He's got to convince conservatives during the course of the next few months. That they're involved in a common enterprise.

"He also has to convince them that he is not ... going to try and remake the [Republican] Party and exclude them."