Accessibility links
Oscar-Nominated 'Counterfeiters' Stirs Furor Out of Austria, The Counterfeiters is up for an Academy Award for Best Foreign Film. But the tale of World War II concentration-camp inmates forced to help undermine the British and U.S. economies has critics as well as admirers.

Out of Austria, The Counterfeiters is up for an Academy Award for Best Foreign Film. But the tale of World War II concentration-camp inmates forced to help undermine the British and U.S. economies has critics as well as admirers.

Oscars are handed out tomorrow, and I don't mean Oscar Mayer wieners. One of the movies nominated in the foreign language category comes from Austria. Its English title is "The Counterfeiters." It tells the story of what's been called the greatest counterfeiting operation in history.

Operation Bernard was conceived by the Nazis to undermine the economies of Britain and America. The Germans forced concentration camp inmates to create and print fake pound notes and dollars.

As Iris Mann reports the film has been controversial.

Mr. STEFAN RUZOWITZKY (Director, "The Counterfeiters"): The situation of a concentration camp inmate is so extreme. We can't imagine what would I do, what would I feel if I were in his place.

MANN: Instead he says "The Counterfeiters" is a kind of caper movie that is also something of a morality play.

Mr. RUZOWITZKY: I didn't want to make a history lesson but every good movie should raise some universal themes about morality, ethics, solidarity, all these things. What I was very interested in was the situation of the counterfeiters being very privileged. They had good food, good clothing, had these soft beds. And at the same time they knew that a couple of meters away their friends and families were starving to death, were tortured and killed. And it was impossible for them to react to that morally.

MANN: Ruzowitzky's movie was inspired by the autobiography of Adolf Burger, one of the prisoners who took part in Operation Bernard and survived. But the filmmaker chose as his protagonist a minor character in Burger's book.

Actor Karl Markovics plays this master counterfeiter. He says the man's strongest instinct is for survival.

Mr. KARL MARKOVICS (Actor): In the camp where he's in this team of counterfeiters all connected together with the same fate and maybe killed when they fail, their relation starts. If you want, a Nazi has to take responsibility for other persons because of his skills. He is responsible for them because they can live longer if he does good work, and so that means responsibility.

MANN: That sense of responsibility comes into conflict with the efforts of another character to sabotage the project. And this leads to a recurring argument over cooperating and living another day or resisting and risking one's life.

MANN: The idea of a moral dilemma among concentration camp inmates is ridiculous, says Lawrence Malkin. He's written a book about the counterfeiting project called "Krueger's Men." He says that the new film distorts history.

Mr. LAWRENCE MALKIN (Author, "Krueger's Men"): Let me make it clear, Mr. Ruzowitzky, I think he's probably an honorable man trying to confront the past. And in his country, the Austrians are probably the last country in Europe really to try to come to terms with the past, and he's to be congratulated on that. But I don't think you do it by bending history, and that raises a really interesting question about movies in general, not just him. That is, when do you cross the line from dramatic license? All movies have a little bit of that - to what I consider to be taking historical liberties.

To me, the presentation of an extended moral debate is - I think it's wrong and it's slightly demeaning to the prisoners in the sense that it implies that they had a moral choice. In a concentration camp, a moral choice? Give me a break.

MANN: While a certain amount of fictionalizing is to be expected, according to Malkin, film is too powerful a medium to be treated lightly.

Mr. MALKIN: It is a truth going all the way back to cowboys and Indians that films are a conduit of historical memory. And if you are actually presenting history or something pretty close to it, I think you have a certain responsibility more or less to stick to the events themselves.

MANN: In fact Adolf Burger, who is portrayed in the film as the hero who wants to resist, told an Israeli newspaper he was nothing of the kind. He just tried to survive. But Annette Insdorf says it's unfair to heap so much baggage on a movie.

Ms. ANNETTE INSDORF (Director, Undergraduate Film Studies, Columbia University): I honestly do not believe that the kind of people who would pay money to see a foreign language film about World War II in a movie theatre are going to sit there and go, oh yeah, this is true. Every single bit of it.

MANN: Insdorf is director of undergraduate film studies at Columbia University, and the author of the first major book-length study of how the Holocaust has been portrayed on the screen.

Ms. INSDORF: When I started writing a screenplay many years ago about my father's experiences during World War II, I realized I was telling a survival story, because that's what it was. And a friend of mine read it and said, wait a minute, if it's just about survival that's not all that interesting. The question is how and why to survive? For what values? Is it just so that your skin stays intact or is it that you care about something?

And for me any film that adds to whatever historical facts that it may already have at its disposal, a moral questioning, that film is to be applauded rather than condemned.

MANN: Even at the risk of distorting some facts, says Insdorf, it's important that these stories be told. And filmmaker Stefan Ruzowitzky, whose grandparents were Nazis, says it's even more important to tell these stories in his country.

Mr. RUZOWITZKY: In today's Austria everybody will agree that the Holocaust was a horrible crime but many people will think it was sort of a collateral damage. It was sort of a negative side effect and actually fascism is about the beautiful highways, trains being on time, law and order and all these things. And if you have a closer look you find out it's the other way around.

The Holocaust and the concentration camps, that's the very essence of Nazi ideology.

MANN: Operation Bernard was ultimately a failure. How well Stefan Ruzowitzky succeeds in telling its story, at least as far as the motion picture academy is concerned, will be revealed when the Oscars are presented tomorrow night. 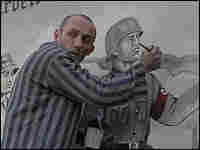 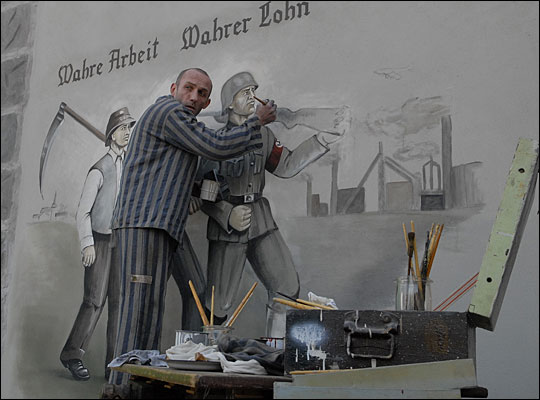 Salomon Sorowitsch (Karl Markovics) is a Jew in a concentration camp, aiding the Third Reich in a massive counterfeit operation. 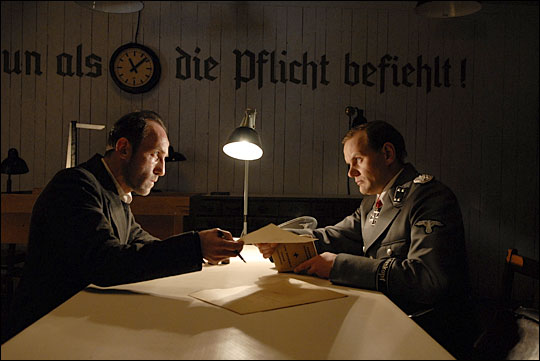 A Nazi plot to destabilize the U.S. and British economies through massive circulation of fake currency rests on the talents of Jewish master-forger Salomon Sorowitsch (Karl Markovics) in this flawed by intriguing drama.

We meet Salomon in Monte Carlo shortly after the war, where he seems hell-bent on losing every banknote in a suitcase packed full to bursting. The film then flashes back to 1936, to find him celebrated in the Jewish community for his fake passports — and yet unable to escape being rounded up, during a sweep of Berlin, for being both a Jew and a habitual criminal.

Salomon ends up in Austria's Mauthausen concentration camp, where his skills making portraits and propaganda murals get him isolated from the general population along with a few printers, artists and paper-makers who are ordered to create perfect dollars and pound notes — or die.

The moral dilemma, as pointed out by a communist printer who begins sabotaging the work, is that if they fail they'll all be killed, but if they succeed, their work will result in the deaths of countless others. Director Stefan Ruzowitzky details how the men — the story has been fictionalized, but it's essentially true — found a middle way, and if his approach is low-key and conventional to a fault, it nonetheless earned the film an Oscar nomination.