Accessibility links
Clinton Criticizes Claims in Obama Campaign Flyers Democratic presidential contender Hillary Clinton lashed out at her rival, Barack Obama, during a press conference Saturday, claiming that his campaign flyers about her positions on health care and trade are spreading lies. 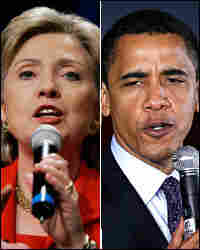 Flyers from the campaign of Democratic presidential hopeful Barack Obama about rival Hillary Clinton have sparked a sharp exchange of criticism on the campaign trail. AP/Getty Images hide caption

Democratic presidential contender Hillary Clinton lashed out at her rival, Barack Obama, during a press conference Saturday, saying his campaign literature is spreading lies about her positions.

"Shame on you, Barack Obama," Clinton said in Cincinnati, Ohio. "It is time you ran a campaign consistent with your messages in public."

"Enough with the speeches and the big rallies and then using tactics that are straight out Karl Rove's playbook. This is wrong, and every Democrat should be outraged," she told the gathering.

David Greene speaks to Liane Hansen about the incident, and what this says about the state of the race for the Democratic presidential nomination.

The incident occurred just a few days after a debate in Texas between the two candidates, in which they seemed to be friendly on stage.

Greene says Clinton's strong words came as her campaign is trying to find a way to "change the narrative of the campaign."

Currently, the press is full of stories about Obama's growing momentum and how he is captivating voters across the country.

"If Hillary Clinton can change the story to how her opponent is characterizing her positions on issues such as trade and health care, while there is a risk of seeming negative, if the issues become the news, then the Clinton campaign will feel like they accomplished something," Greene says.

In response, Obama called her anger "tactical," and added that he has been the target of his own share of attacks from the Clinton campaign.

He says the back and forth is just normal politics during a heated campaign and that this is not an issues debate, but rather, a moment when Clinton had to come out with something to try and change the message.

Both candidates are now campaigning hard to gain voters in upcoming primaries, including significant contests in Texas and Ohio.