Accessibility links
'No Country for Old Men' Wins Four Oscars On a night when the acting awards had a distinctly international flavor, a quintessentially American story of violence — No Country for Old Men — made the deepest impression on Oscar voters at the 80th annual Academy Awards, getting the nod for Best Picture. 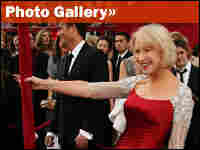 And the Oscar Goes to To...

"Thank you to the Coens for being crazy enough to think that I could do that and put one of the most horrible haircuts in history over my head."

"I have an American agent who is the spitting image of this [Oscar statuette]. Really truly the same shape head and, it has to be said, the buttocks. And I'm giving this to him because there's no way I would be in America at all ever on a plane, if it wasn't for him. So, Brian Swardstrom, I'm giving this to you."

"Well, I'm speechless now. I thank you life, thank you love, and it is true, there is some angels in this city."

Daniel Day-Lewis
There Will Be Blood

"And that's the closest I'll ever come to getting a knighthood, so thank you."

On a night when the acting awards had a distinctly international flavor, a quintessentially American story of violence — No Country for Old Men — made the deepest impression on Oscar voters at the 80th annual Academy Awards.

A ceremony once threatened by the recently concluded writers' strike was the setting for multiple triumphs by No Country, a film adapted from the work of the unflinching novelist Cormac McCarthy and the wide-ranging writing-directing team of brothers Joel and Ethan Coen.

The bleak tale of the bloody aftermath of a botched West Texas drug deal won Best Picture and the Coens were jointly honored for Best Achievement in Directing and for Adapted Screenplay. Javier Bardem, who played the sociopath at the center of the action, topped a deep field for Best Actor in a Supporting Role.

"Ethan and I have been making stories with movie cameras since we were kids," Joel Coen said as the brothers accepted their directing award. "And honestly, what we do now doesn't feel that much different from what we were doing then ... we're very thankful to all of you out there for letting us continue to play in our corner of the sandbox."

Foreign-born stars swept the statuettes in the acting categories, including Daniel Day-Lewis of Britain, who took home a second Best Actor Oscar for his explosive portrayal of a stop-at-nothing California oil man in There Will Be Blood. He has been nominated four times in all, despite taking relatively few roles in a selective career.

"My deepest thanks to the members of the Academy for whacking me with the handsomest bludgeon in town," Day-Lewis said, holding Oscar in his hand.

The other performers beyond borders were Marion Cotillard of France (Best Actress for channeling tragic torch singer Edith Piaf in the biopic La Vie en Rose); Britain's Tilda Swinton (Best Actress in a Supporting Role for her lawyer in desperate straits in Michael Clayton); and Bardem, born in Spain's Canary Islands.

Honorary Oscar winner Robert Boyle, the legendary production designer, took the stage at 98, and quickly acknowledged the standing ovation that greeted him: "That's the good part of getting old. I don't recommend the other."

Host Jon Stewart cited well-known actresses in the audience who were expecting a child, including Cate Blanchett, Jessica Alba and Nicole Kidman, then announced: "and the baby goes to Angelina Jolie."

Stewart announced that the presenters for Sound Editing would be the glorious Dame Judi Dench and the glamorous Halle Berry, whereupon everyman funnymen Seth Rogen of Knocked Up and his younger look-alike Jonah Hill [who played a fictionalized teen Rogen in Superbad] emerged as replacements "pulled from the audience." They delivered clever banter about which of them looked more like Halle Berry.

Josh Brolin, paired with James McAvoy to read great lines from films past, trotted out a Jack Nicholson impersonation, then apologized to the multiple Oscar winner, who was sitting in the audience: "That was my Nicholson. That was one of the worst Nicholsons ever done. Sorry, man."

Joel Coen, accepting the award for Adapted Screenplay, gave a nod to novelist McCarthy: "I think whatever success we've had in this area has been entirely attributable to how selective we are. We've only adapted Homer and Cormac McCarthy ..." [Homer's Odyssey was the inspiration for the Coens' highly original 2000 screenplay for O Brother, Where Art Thou?]

-- Todd Holzman for NPR, with information from Oscar.com and IMDB.com.