Accessibility links
Pakistani School System Highlights Wealth Gap One of the biggest challenges facing Pakistan's new government is how to repair the country's dismal public school system. Pakistanis with money send their children to private school, and the poor have to be content with the crumbling public school system. 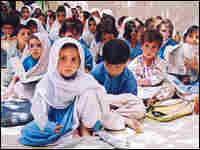 Pakistan spends 2.4 percent of its gross domestic product on education, below the 4 percent recommended by the United Nations in developing economies. UNICEF hide caption 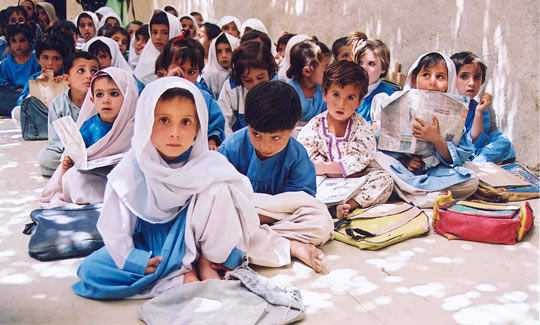 Pakistan spends 2.4 percent of its gross domestic product on education, below the 4 percent recommended by the United Nations in developing economies. 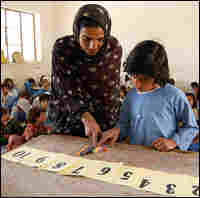 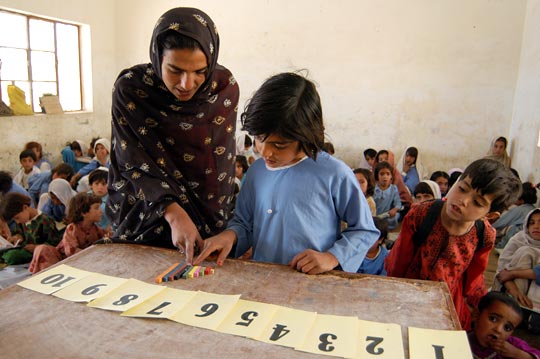 A classroom in a UNICEF-supported, AusAID-funded girls primary school in Pakistan's Balochistan province.

Pakistan's new government will face huge problems when it assumes power. One of the most daunting is the nation's collapsing public school system. It's under-funded, under-equipped and under-staffed at a time when 60 percent of the population is under 18.

The result is one of the lowest literacy rates in the region: Of the country's 165 million citizens, 48 million are unable to read and write. Literacy rates are significantly lower in rural areas, especially among women.

Pakistan's government spends less than all its neighboring countries on education — 2.4 percent of its gross domestic product, compared with the United Nations' recommended norm of 4 percent in developing economies like Pakistan. And the funding that is allocated is often misspent or lapses before it can be used. Despite these challenges, the majority of Pakistanis continue to send their children to public schools.

The decrepit school building of the Girls Primary School in the Almabad neighborhood in Rawalpindi is tucked behind a rowdy market of fruit vendors and donkey carts. It has been without electricity and water for months. Its fading walls rise around a dirt courtyard that doubles as the playground.

Broken flowerpots are strewn across the ground. In Shabnam Kawal's fourth-grade algebra class, 70 girls sit shoulder to shoulder in a room designed for 25. And on this frigid winter day, the concrete walls make it colder inside than it is outside.

"I've complained to everyone," the teacher says. "I've told the administration. What more can I do?"

As a result of these conditions, Pakistani parents across the class spectrum have found alternatives. A few students — less than 1 percent, according to the World Bank — attend madrassas, or religious schools, as they often provide food and lodging in addition to religious training.

In addition to often providing better services and having more resources than their public counterparts, the country's top private schools are educating the country's next generation of leaders.

Beacon House is Pakistan's oldest and largest private school network. During the past 33 years, it has expanded to 130 branches across the country, equipped with computers and modern amenities. Its students aspire to attend universities abroad and to pursue professional careers. Hashim Mustasin, 16, attends the Beacon House in Lahore's posh Defense neighborhood. He says he plans to apply to Columbia University, and predicts that he "will get in for sure because I am a straight-A student."

Unfortunately, the families who can pay for this modern education are a minority in Pakistan. What becomes of the other Pakistan, the majority, will be the key to the country's future.

Public school graduates often fail to secure living wages, much less professional careers, and become frustrated and resentful. Some turn to violence, and extremist organizations prey on that resentment.

Mehnaz Aziz, who heads the Pakistan chapter of Children's Resources International, a non-government organization focused on improving education, says the failure to modernize Pakistan's schools is one of the major causes of religious extremism.

"Our elite children are linked to the global reality, and the extremists are children who were never given the passage to that global link because we have not made that change in the classroom," Aziz says.

Javed Ashraf Qazi, who served as education minister under President Pervez Musharraf from 2004 to '07, blames politicians for making education a low priority. Qazi calls the education bureaucracy "extremely corrupt and extremely useless." In addition, Qazi admits that because most of Pakistan's ruling elite send their own children to private schools, the health of the country's public education system is rarely a personal problem for government officials.

In the run-up to last week's parliamentary elections, 16 of the country's political parties attended an all-party conference organized by the United Nations to discuss the abysmal state of public education. The speakers included representatives from various regional and national parties, including the two parties that won the largest share of votes in the elections — the Pakistan People's Party and the Muslim League–N, the party of ex-prime minister Nawaz Sharif. At the conclusion of the conference, the parties signed a declaration pledging to make education a top priority in the new parliament.

Pakistan's politicians will have to match the commitment of teachers like Mohammad Jehangir at the Rawalpindi Boys School in Rehmatabad. Jehangir, an optimistic and jovial man in his late 30s, says he looks forward to working with his students every day. He says allowing public schools to fall by the wayside is not an option.

"These were my schools and these are Pakistan's schools," he says. "I have studied in these same classrooms, sitting on a dirt floor, and I want us to improve these classrooms."