Accessibility links
Oscar-Winning Words of Hard-Won Hope When Glen Hansard and Marketa Irglova recorded the songs that would fill the soundtrack for the film Once, few expected that they'd find a wide audience. Now an unlikely Oscar-winner, "Falling Slowly" is a star-making showcase for Hansard and Irglova's bittersweet, beautiful music.

Hear a Complete Concert by Glen Hansard and Marketa Irglova, from All Songs Considered

[This story originally ran on Sept. 6, 2006. Since then, Glen Hansard and Marketa Irglova have become unlikely movie stars, winning the Academy Award for Best Original Song Sunday night. This track is an early version of the winner, "Falling Slowly," recorded during the making of the hit indie musical Once.] 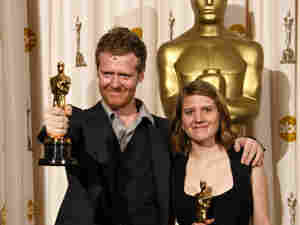 In their native Ireland, the members of the string-swept rock band The Frames have attracted a rabid following to rival that of their countrymen in U2. Here, they perform at small to midsize clubs, occasionally tour with the likeminded likes of Damien Rice, and sell a modest number of albums as stirring and gorgeous as any released here. One of the best live bands in existence — for evidence, listen to "What Happens When the Heart Just Stops" (audio) from the tremendous 2004 live album Set List — The Frames and singer Glen Hansard seem perpetually on the brink of becoming massively famous, even iconic.

During a brief hiatus from The Frames, Hansard recently recorded The Swell Season, a collaboration with Czech singer and pianist Marketa Irglova, and the result aches and swoons amid some of the year's loveliest arrangements. A longtime master of sad-bastard music at its most sublimely melodramatic, Hansard actually finds words of hard-won hope and comfort on "Falling Slowly": "You have suffered enough and warred with yourself / It's time that you won."

Those lines sum up much of The Swell Season's immense appeal: Though not exactly stingy with the romantic carnage, the disc feels as warm and content as anything Hansard has recorded in a mostly brilliant career spanning two decades. "Take this sinking boat and point it home," he and Irglova sing, adding, "We've still got time." Their words and voices, expertly placed amid a breathtaking array of strings, pianos and acoustic guitars, are soothing enough to warm the blood through a long winter.