Accessibility links
Afghan Farmers Turn to Cannabis as Cash Crop Frustrated by government raids on opium poppy crops, more and more Afghan farmers are turning to a lucrative alternative that's just as illegal: cannabis, the source of marijuana and hashish. The new crop has taken hold in Kandahar province. 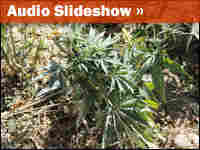 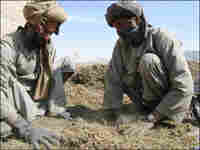 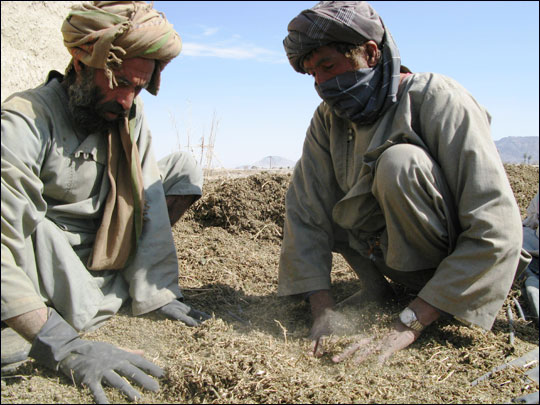 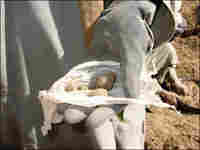 Clumps of hashish are kneaded by hand from the filtered cannabis seeds. The clumps are later heated and smoked. Soraya Sarhaddi Nelson, NPR hide caption 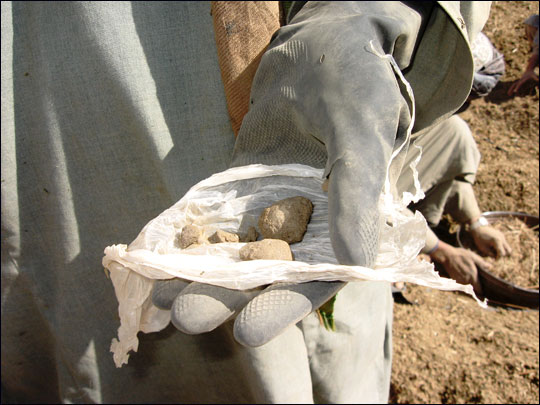 Clumps of hashish are kneaded by hand from the filtered cannabis seeds. The clumps are later heated and smoked.

Frustrated by government attacks on their opium poppy crops, a growing number of farmers in Afghanistan are turning to a lucrative alternative that is just as illegal: cannabis, the source of marijuana and hashish.

In southern Kandahar province, farmers in nearly three-quarters of the villages recently surveyed by the United Nations said they would plant cannabis this spring.

Jan Mohammad, a tenant farmer outside Kandahar City, spends nine hours a day filtering cannabis leaves and then kneading the residue into clumps of hashish.

He earns $30 a day — five times as much as he earns from harvesting wheat.

Mohammad's landlord, Ateegh — the nephew of a top Kandahari government official — sells the clumps of hashish to Pakistani smugglers who cross the border a 90-minute drive away.

Ateegh says this year he plans to double his cannabis crop, while cutting back on opium poppies.

He says that's because it's cheaper to grow cannabis — plus, demand for the drug in nearby Iran and neighboring Pakistan is increasing.

And his brother-in-law Mukthar notes that Afghan eradication teams didn't touch Ateegh's cannabis crops last year, while they did destroy more than half of his poppy fields.

"The foreigners don't complain about cannabis like they do about poppies. So the government doesn't do anything about it," Mukthar says.

Such thinking has led to a boom in cannabis cultivation in the country. In a report earlier this month, the United Nations declared Afghanistan not only the top opium supplier in the world, but one of the biggest cannabis suppliers as well.

Most of the cannabis that authorities are aware of is being grown in the north and east, where poppy cultivation has largely stopped.

The exception is Kandahar, where both poppy and cannabis growth is expected to increase this year.

"It may even be that this country is turning into the No. 1 in terms of cannabis as well, which is not an honorable position to be in," says Christina Oguz, head of the U.N. Office on Drugs and Crime in Afghanistan.

But with world attention so focused on opium, little is really known about cannabis cultivation in Afghanistan, she adds.

Both drugs are banned under Islam. But unlike opium, hashish is more or less socially acceptable here and widely used by Afghan men. "Cigarette-tees" — as hashish cigarettes are called — are for sale at many shops.

Oguz says the cannabis plant is also much easier to grow than opium poppies. Plus, Taliban fighters and corrupt government officials don't appear to be skimming off cannabis growers' profits the way they do with poppy farmers.

But Kandahar Gov. Assadullah Khalid says landowners like Ateegh are mistaken if they think their cannabis crops will be spared. It's illegal to grow cannabis, and Khalid says the government will take action. Still, he says, poppy crops were the first priority.

That's what Ateegh's tenant farmer, Jan Mohammed, is banking on.

He believes that as long as there are poppies, the government won't have time to go after cannabis. Khalid's eradication teams destroyed 20,000 acres of poppies last year.

The farmer says that by the time authorities do get around to it years from now, he will have found another lucrative crop to grow.