Accessibility links
Watching Peru's Oceans for Cholera Cues Warming oceans were behind Peru's cholera outbreaks in the 1990s, and global warming may cause future outbreaks. Some scientists in Peru are closely watching microscopic marine life, hoping to catch an outbreak before it begins. 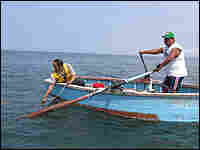 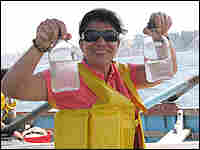 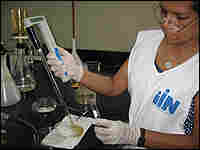 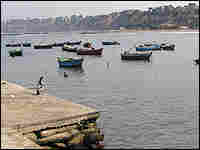 For now, there's no sign of cholera in the ocean off Peru. But researchers plan to keep a close watch in years to come. Joanne Silberner, NPR hide caption

Before 1991, no one in Peru could remember a cholera outbreak. Then, in a single day, it hit hard up and down the coast and took off from there, eventually killing thousands. That outbreak was fueled by a change in ocean temperatures. Now some people worry that climate change could bring the scourge back to Peru.

Two scientists in Lima are trying to be ready before the disease strikes. Ana Gil and her husband Claudio Lanata, researchers at the International Institute of Nutrition, are watching out for the earliest hints of cholera. In the epidemic of the 1990s, Lanata says, people panicked.

"When cholera hit us, nobody knew what to do," he says. "They were thinking that people were going to die like flies."

Cholera causes diarrhea so bad that a person can die within a few hours. Lanata estimates that about 14 million people in Peru were infected, and 350,000 ended up in the hospital.

"It's a very nasty disease," Lanata says. "It's like you've opened a faucet in your system. Water just comes out of you in large amounts — liters and liters."

He saw it firsthand when he studied in the United States. American volunteers allowed themselves to be infected to test the efficacy of a vaccine. The vaccine didn't work well, but cholera is easily treated if resources are available — clean water for rehydration and salts to replace the salts that are lost.

In Peru's 1991 epidemic, doctors quickly turned to that effective and inexpensive therapy. There were enough health clinics around, and people got the message to come in quickly, so the death rate was relatively low: 3,500 people. A smaller epidemic occurred in 1998. Both were linked to El Nino, the periodic and unpredictable weather disruption that leads to warmer ocean currents. Warm ocean currents encourage the growth and spread of cholera bacteria.

Lanata and Gil, a microbiologist, are worried that global warming will bring cholera back. Gil has scrounged up money left over from other projects to set up a rough surveillance system to find cholera before an epidemic takes hold.

Lanata and Gil have both worked with microbiologist Rita Colwell at the University of Maryland. Colwell has shown that the bacteria that cause cholera often live on plankton — microscopic plants and animals that drift in the ocean. These organisms are sensitive to heat. Warmer waters promote their growth, thus increasing the chance of a cholera epidemic. And water that gets warmer earlier in the spring or stays warmer later in the fall can change the local ocean ecology.

To test the plankton at the root of this chain, Gil hires a creaky wooden fishing boat to take her and her assistant off the coast of Lima. A few hundred meters offshore, Gil's assistant, William Lopez, gets into the little rowboat. He throws a long, conical net overboard and circles the big fishing boat, again and again. He collects ocean water as well.

"He will transfer that water into that flask," Gil explains. "The water is very clear; it looks like there's not much plankton." Gil is also monitoring seawater temperature. It is 17.8 degrees Centigrade.

A Reprieve For Now

It's Gil's first time checking water and plankton since the 1998 El Nino. She hurries back to the lab, across town, past the gated campus of an agriculture university, past a potato research institute, and, at last, to the International Institute of Nutrition. Gil's assistant Carmen Maria Barreno carefully pours the precious sample into a beaker.

It takes a few hours to filter out the plankton.

In mid-afternoon, Barreno takes a petri dish filled with jade green growth medium and dabs on some plankton. Now Gil holds that petri dish up to the light.

"The reaction has to happen in the first 2 or 3 seconds," she says. "It's very fast." She looks anxiously at the dish. "So, it's clean. No cholera in our seawater yet."

It's a quiet but momentous discovery.

Cholera isn't the first disease that climate change has brought to Peru. Lanata says dengue is back — a mosquito-borne infection that causes high fever and great pain.

"You're now having these diseases you didn't expect to have at all," Lanata says. "Dengue last summer hit us in Lima, and the mosquito is moving south because the weather allows them to move."

Gil suspects that, for cholera, it's just a matter of time.

"If the sea temperature is increasing, it will be the chance for the bacteria to grow faster, and it will be the beginnings of a new epidemic," she says. "We have to be alert."

If Gil and Lanata find cholera bacteria before an epidemic takes hold, they can at least warn people to cook fish thoroughly, boil drinking water, and keep their hands clean — or maybe even try a new vaccine.