Accessibility links
Les Savy Fav Explodes Beyond Radio Les Savy Fav plays loud, angular, hard-hitting rock. The oft-shirtless Tim Harrington writhes, screams, and whispers his educated and poetic lyrics at the audience as if he's possessed. Somehow, this all translates into a funny and chaotic in-studio performance on KEXP. 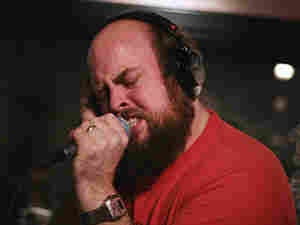 Les Savy Fav stopped by KEXP's Seattle studio to support its new album, Let's Stay Friends, just before heading over to Neumo's for a sold-out show that night. As the band arrived, KEXP was abuzz with excitement and anticipation. All morning, listeners had been emailing questions for me to ask. We all knew — staffers and listeners — that Les Savy Fav is one of the best live bands ever.

The instrumentation is perfect: Loud, angular, hard-hitting. The vocals? Well, the oft-shirtless Tim Harrington — who wears an odd assortment of short shorts, stuffed animals, wigs, and capes — writhes, screams, and whispers his educated and poetic lyrics as if he's possessed. On stage, Les Savy Fav never disappoints. But I wondered, how would these explosive live antics translate to the blind medium of radio?

Straight out of the gate, I knew that we were in for an amazing and unforgettable performance. I agreed with Justin, one of our interns, who said he was "intimidated by the sheer intellect of their humor," but Justin also thought that Harrington and the band might tone it down in-studio since there was no big crowd to please. He was wrong. Between songs and during the interview section, the staff in attendance was doubled over laughing at the barrage of relentless quips, inside jokes, and tongue-in-cheek humor among band members.

The hilarity was non-stop. Even before the session began — and throughout — Harrington repeated, "Are we on the air?" to the point of absurdity. In the end, mic in hand, he ran out of the performance space and into the hallway to the surprise and delight of unsuspecting staff and interns. It was one of the most jaw-dropping, head nodding, toe-tapping, goose-bump-inducing, and awe-inspiring sets ever at KEXP.