Accessibility links
A Site's New Tack: Walking Away from Mortgage An online company is trying to convince some homeowners that losing their home might not be so bad. The Web site, youwalkaway.com, features pictures of happy families; it urges stressed-out homeowners to "use our proven method to Walk Away."

Listen
A Site's New Tack: Walking Away from Mortgage

An online company is trying to convince some homeowners that losing their home might not be so bad. The Web site, youwalkaway.com, features pictures of happy families; it urges stressed-out homeowners to "use our proven method to Walk Away."

Well, here is a company that's trying to convince some homeowners that losing their home might not be so bad. It's called YouWalkAway.com. The Web site features pictures of happy couples and their babies and these questions: Are you stressed out about your mortgage payments? What if you could live payment-free for up to eight months and walk away without owing a penny? Unshackle yourself today, it says, and use our proven method to walk away.

Eric Weiner wrote an article about this for npr.org and he's with us here now. Eric, foreclosure usually seen as a last resort; here, it's being presented as a choice and a good thing.

ERIC WEINER: Right. And this is a radically different approach to foreclosure. As you say, it's been seen as something that people stress about and are ashamed of, and would do anything to avoid. And this company, as you mentioned, is saying, hey, you should consider foreclosure as a choice, it might actually be good for you and your family.

BLOCK: This a new company, just started up last month?

WEINER: It did. Shortly after the New Year. And it was started by two businessmen and attorneys in Southern California. And they clearly saw an opportunity amid all of the foreclosure debris. There are nearly a million Americans right now who are somewhere in the foreclosure process and many more who may soon be going that path. And this company essentially will walk you through the foreclosure process. They don't buy your home or anything like that, they merely provide you with information. They'll send a letter, for instance, to the bank that's coming after you and say that you shouldn't call these people. They'll give you time with an attorney and with an accountant. And they do all of this for the fee of $995.

WEINER: Well, that's a good question. It doesn't appear to be a scam in that they're pretending to be anything other than what they are. But what are they doing? They are providing information, information that is readily available out there or you could hire your own accountant, or hire your own attorney. I've talked to a number of consumer watchdog groups, though, and they are concerned about this company.

And what they're concerned about is that it's sending the wrong message, that it is essentially discouraging distressed homeowners from pursuing all other options before going into foreclosure. And also, that they are essentially playing down the aftereffects of foreclosure. On their Web site, they use language to the effect of, this will all be behind you soon and you can make a fresh start. Well, you might be able to, but it might take as long as 10 years. That's how long a foreclosure will remain as a huge black mark on your credit rating.

BLOCK: They do say on their Web site that people can typically buy a house four years after foreclosure, maybe two years with government loan agencies doing the lending. Is that true?

WEINER: I think that's optimistic. From my discussions with consumer watchdog agencies, they say that it will typically be longer than that, somewhere between five and 10 years, and it really varies from state to state. But if you think about it, you don't really what to have something like that on your credit rating. And what this company is trying to do is really pretty remarkable if you think about it. They're trying to change the whole American attitude towards foreclosure.

BLOCK: I would imagine, Eric, that there will be other companies just like this springing up very soon.

WEINER: Well, business is good. They say they get 25,000 hits a day on their Web site. They don't say exactly how many customers they have. They're getting a lot of attention in the media as well.

BLOCK: NPR's Eric Weiner. Thanks so much.

Why Not Just Walk Away from a Home? 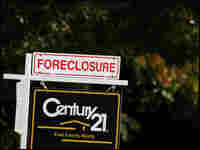 A "for sale" sign is seen in front of a foreclosed home in Antioch, Calif., in October 2007. Justin Sullivan/Getty Images hide caption

The Web site for You Walk Away is cheery and reassuring. There's a photo of a happy family in a park, smiling. Another family, also smiling, is packing up boxes.

"Are you stressed out about mortgage payments?" asks the site rhetorically. "Is foreclosure right for you?" it queries, but doesn't wait for an answer. "You are not alone — over 2.9 million homes have foreclosed in the last three years," it says. The not-so-subtle message: Foreclosure need not be a shameful, life-ruining experience. In fact, the company will gladly hold your hand through the foreclosure process—for a fee, of course.

Foreclosure, we're told, is a last resort, an option that no responsible homeowner would ever choose. But some distressed homeowners — no one knows exactly how many — are doing just that. They're voluntarily walking away from their mortgages, engaging in a practice the mortgage industry calls "ruthless default."

But is it really ruthless — or just good businesses sense? Some economists argue it's definitely the latter.

Sometimes, they say, walking away from your mortgage makes economic sense, especially for homeowners who find themselves "upside down" — that is, they owe more on their mortgage than their house is worth. In those cases, "voluntary foreclosures are not by themselves evidence of a newfound irresponsibility on Americans' part," says Nicole Gelinas, writing in The Wall Street Journal .

Separating the economics of foreclosure from the morality (and the stigma) is not easy, though.

"We need a culture of responsible consumers and homeowners," says Gail Cunningham, spokeswoman for the National Foundation for Credit Counseling, echoing a deep-seated American belief that one should always honor financial obligations.

The current housing crisis is different, argue some economists: Since some financial institutions sold these loans in a deceptive manner — for example, by approving people for loans they couldn't really afford — then why should homeowners feel obliged to honor their commitments?

The Virtues of Self-Interest

Most homeowners avoid foreclosure for selfish, and not necessarily moral, reasons. Foreclosure leaves a large black mark on a homeowner's credit rating. It might be as long as 10 years before they can qualify for another mortgage.

But Gelinas — a financial analyst and contributing editor of City Journal — argues that if enough people walk away from their homes, then banks won't blacklist all of them.

One thing that is certain: Foreclosures are on the rise. The Mortgage Bankers Association estimates that roughly 900,000 Americans were in the foreclosure process as of Sept. 30, 2007 — the most recent data available. That's an increase of 72 percent from the same period a year ago. Cities in California, Ohio, Florida and Michigan posted the highest foreclosure rates in the U.S., according to RealtyTrac, a private firm.

Traditionally, most people who foreclose on their homes do so because they lost their jobs or were hit with unexpected medical expenses. But the subprime mortgage crisis is different. Seven out of 10 people foreclosing on their homes are healthy and gainfully employed, according to John Taylor, president of the National Community Reinvestment Coalition. They simply can't afford to make their monthly payments.

Helping Others Walk Away

The spurt in foreclosures has spawned a cottage industry of firms who smell a business opportunity amid the misery. You Walk Away is getting the most attention, with some 25,000 daily hits to its Web site. (The firm won't disclose how many customers it has.)

For a fee of $995, the company offers services such as a "protection kit." For instance, they'll send a letter that "stops lenders from harassing the homeowner." They'll also put distressed homeowners in touch with a lawyer and an accountant to discuss their options. They'll advise people in the midst of foreclosure how long they can legally live in their homes, tempting people with the prospect that, "You WILL be able to stay in your home for up to 8 months or more without having to pay anything to your lender!"

Chad Ruyle, the company's co-founder, says they are not encouraging people to pursue foreclosure but merely helping them through the process once they have made that decision.

"We're not causing the foreclosure problem," he says. "The problem was already there." Or, as his business partner Jon Maddux puts it, "You can't blame a divorce lawyer for a divorce."

Firms like You Walk Away, though, have raised red flags with credit counselor and consumer watchdogs. Ellen Schloemer, director of research at the Center for Responsible Lending, says borrowers would be better off hiring their own attorneys and accountants, rather than relying on those provided by You Walk Away.

It takes a decade to recover from a foreclosure, she says, and there's not much anyone can do about that. The company, she says, paints a misleading picture of the foreclosure process.

"The real solution is to help people before they're forced into foreclosure," she says.

John Taylor, of the National Community Reinvestment Coalition, says he's concerned that the company might not help customers explore all of their alternatives before going into foreclosure.

"I would rather see people who are facing foreclosure fighting to keep their home, and keep it as long as possible, because help is on the way," he says.

On Tuesday, in fact, the Bush administration announced a new initiative aimed at helping homeowners about to lose their homes. For qualified homeowners, it will freeze the foreclosure process for 30 days. Dubbed "Project Lifeline," the new program will be available to people who have taken out all types of mortgages, not just the high-cost subprime loans that have been the focus of previous relief efforts.

Those efforts, of course, are about avoiding foreclosures, not facilitating them.

"Walking away from one's home should be the absolute last resort," says Gail Cunningham of the National Foundation for Credit Counseling. "However desperate a situation might become for a homeowner, that does not relieve us of our responsibilities."

But there is one category of homeowner, she says, where foreclosure does make sense: people who bought their homes "with their hearts and not their heads."

"For people who may never be able to afford their home, then walking away is a viable option," she says. "If long term, you're not going to be able to sustain the mortgage payment, then you're fooling yourself and should get out of that situation and move on to life after foreclosure."