Accessibility links
Maine Roads Illustrate Financial Woes Across U.S. One Maine resident has started a "pothole rebellion." Bridges also are in bad shape, wearing out twice as fast as the state can replace them. No one knows where the money to fix the ailing infrastructure will come from. 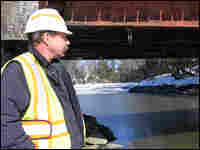 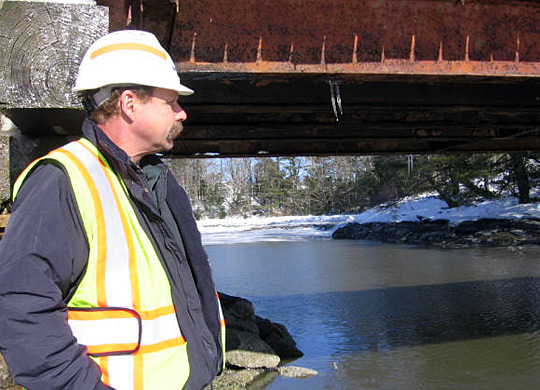 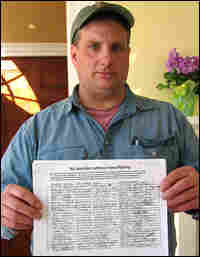 Andy Young started collecting signatures on a petition that asks that Lincolnville, Maine, cease all payments to the state until the state fixes the roads. Kathleen Schalch, NPR hide caption 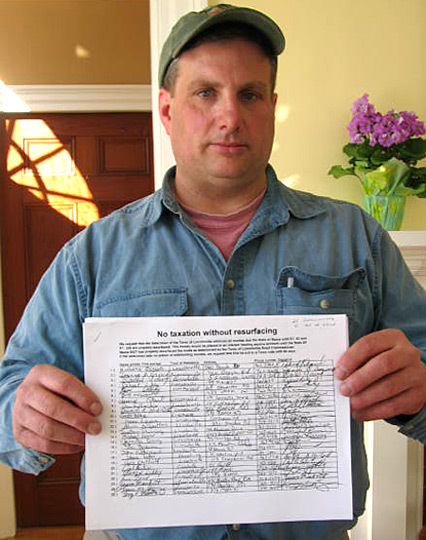 Andy Young started collecting signatures on a petition that asks that Lincolnville, Maine, cease all payments to the state until the state fixes the roads.

Throughout Maine, drivers navigate huge potholes that have the potential to cause costly damage to cars and tires.

Pat Moody of AAA of Northern New England says Mainers spend $250 million a year fixing cars that get beat up on the roads.

"Last week on this road, we had eight separate instances, all in the span of an hour, where a member called in after hitting a pothole just like this one, and having their tire popped," Moody says.

In small towns, the roads often are worse, and it takes longer to get them fixed. Andy Young of Lincolnville says the state roads through his town are falling apart.

"They start out as potholes, and now there are literally 20- to 30-foot stretches where the pavement is gone," Young says. "Cars are bottoming out. You can't go any faster than 10 to 15 mph. It's ridiculous. We've never seen anything like it before. It's not good, and it's not safe."

This month, Young started what the local paper calls a "pothole rebellion." He circulated a petition asking the town government to withhold state taxes until the state repaves the roads.

"The petition says 'no taxation without resurfacing.' I think anybody that saw the petition signed it. There's a lot of mad people," Young says.

The trouble — as even Young admits — is that there are bad roads and angry drivers all over the state.

Maine would need an estimated $2 billion over the next decade to fix its ailing transportation infrastructure. And no one knows where that money will come from.

Priorities have shifted. Maria Fuentes, from a coalition called the Maine Better Transportation Association, says three decades ago, a quarter of the state's revenues went to transportation, but now it's less than 10 percent.

"It's the same on the federal level," Fuentes says. "I mean, you look at defense, you look at all sorts of things, and transportation makes a tiny sliver."

The money for roads and bridges comes mainly from gasoline taxes. The federal government hasn't raised fuel taxes since 1993. Maine indexes its fuel tax to inflation, but revenues have been flat or declining, state Sen. Dennis Damon says.

At the same time, prices for asphalt, concrete and steel have skyrocketed.

"The cost of construction for highways and bridges in Maine has increased by 50 percent over the last three years," Damon says. "And so the alligator's mouth is opening wider and wider."

And, Damon says, many roads and bridges in Maine and other states were built around World War II and are reaching the end of their expected life span.

"We continue to limp over them, we continue to make due, and ultimately people die because of it. It's not as acute and graphic as a bridge collapse, but it happens every single day somewhere on a road in the United States, and it's because of this deterioration," Damon says.

To keep people as safe as possible, states like Maine are making tough choices.

Buxton says he's afraid the abutment could shift or give way.

"Somebody on a dark stormy night wouldn't be able to see it. They'd be driving into a hole," he says.

In cities like Portland, permanently closing bridges isn't practical. But Maine's bridges are wearing out twice as fast as the state is able to replace them. So, as bridges deteriorate, engineers post signs limiting the weight of vehicles that legally can cross them.

"It used to be that you'd post or close a bridge every now and again, and now it's becoming common practice, and I only see it happening exponentially," he says.

The problem isn't limited to Maine. The congressionally appointed National Surface Transportation Policy and Revenue Study Commission estimates that the cost of needed repairs is $220 billion — at a minimum — per year. Right now, federal, state and local governments are spending less than half that.

This week, the nation's governors are meeting in Washington, D.C., and transportation — and the lack of money to improve it — is a top item on their agenda.

The urgency comes six months after a deadly bridge collapse in Minnesota raised national awareness of the crumbling state of many roads and bridges. And with the economic downturn, more states will find themselves making tough choices about where their money goes.

"We found that we have a transportation crisis in this country that threatens our international competitiveness, our economic prosperity and our way of life," says Jack Schendorf, chairman of the transportation infrastructure panel. He met with the governors Sunday.