Accessibility links
Religion Survey Finds Many Americans Swap Faiths The Pew Forum on Religion and Public Life surveyed tens of thousands of Americans and found that more than 40 percent will switch from the faith of their upbringing. The study also found that immigration trends are affecting religion demographics in America. 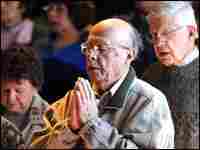 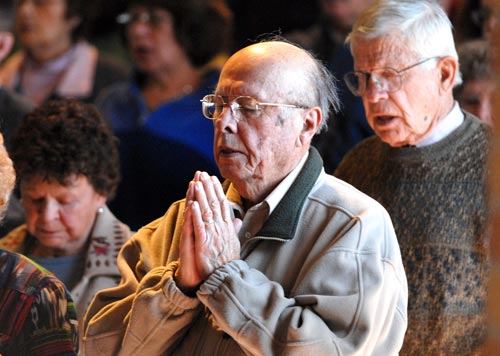 Full results of the survey and tools for examining the findings

Americans are comfortable with change. They not only change jobs and swap hometowns, but, according to a new report, they also try out different faiths.

The Pew Forum on Religion and Public Life surveyed tens of thousands of Americans and found that more than 40 percent will switch from the faith of their upbringing.

Steve Inskeep discusses the report's findings with Luis Lugo, director of the Pew Forum on Religion and Public Life.

One of the major findings, Lugo says, is that immigration trends are affecting religion demographics in America — tilting the Christian balance in the U.S. toward Catholicism and diversifying the range of choices that are nontraditional to the U.S.

According to the study, more than one-quarter of American adults (28 percent) have left the faith in which they were raised in favor of another religion — or no religion at all. If change in affiliation from one type of Protestantism to another is included, 44 percent of adults have either switched religious affiliation, moved from being unaffiliated with any religion to being affiliated with a particular faith, or dropped any connection to a specific religious tradition altogether.

The survey confirms that the United States is "at the doorstep" of becoming a minority Protestant country, Lugo says. He says mainline Protestantism has seen the greatest losses. Although a good number of Catholics also have left the church, immigration has helped keep the Catholic percentage steady, Lugo says.

Among the winners in the survey are "unaffiliated" Americans. That group is gaining more members than it's losing, Lugo says — but he points out that not everyone in that group is "unreligious."

"A good percentage of folks in that group tell us that religion is at least somewhat important in their lives, but they have become disassociated from institutionalized religion," he says.

Among Americans ages 18 to 29, one-in-four said he or she is not affiliated with any religion.