Accessibility links
Carl Hancock Rux, Renaissance Man Carl Hancock Rux began his career in the arts as a spoken-word poet. He has ambitiously matured into an author, musician and playwright. Rux discusses his new novel, Asphalt, and his CD, Apothecary Rx. 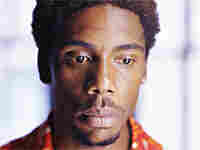 At one point in 2003, Carl Hancock Rux was finishing a play, starting a novel and recording music for his latest CD. Unlike your average mortal, Rux saw all three major projects received with critical acclaim.

This was nothing new for the prolific and talented young artist. Throughout the 1990s, Rux produced a stream of poetry, theater, dance, music and fiction with the energy -- and quality -- found in the top artists devoted to only one of those disciplines.

Following a rough-and-tumble childhood, Rux began his career at the famous Nuyorican Poets Cafe in New York's East Village. While he admits that the Nuyorican experience was invaluable, he moved on after a few years to keep from being locked into the spoken word artist mold. Too many other creative impulses were demanding attention.

He started writing plays and then branched out into published works, dance and music. As the century turned, his awards, prizes and fellowships began to pile up. He won a prestigious Obie Award in 2002 for his play Talk, which will be published later this year.

Now Rux is set to premiere his poetic opera, Mycenean, in the fall, commissioned by the Washington Performing Arts Society.