Accessibility links
M. Ward's Simple Folk M. (Matt) Ward's bittersweet lyrics and understated delivery have made him a favorite on the underground music scene. His latest CD is Transfiguration of Vincent. 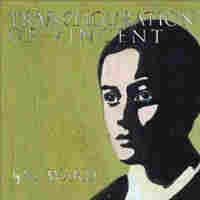 Portland-based M. (Matt) Ward's bittersweet lyrics and understated delivery have made him a favorite on the underground music scene. Formerly with the folk rock trio Rodriguez, Ward released his third solo CD, Transfiguration of Vincent, at the end of 2003.

Ward talks to NPR's Scott Simon about some of his influences and inspirations and the experience of recording Transfiguration of Vincent in a friend's attic studio.

A major influence on Ward was folk music cult figure John Fahey, who died in February 2001 at 61. Fahey began recording in the early 1960s and his music inspired many artists, including Leo Kottke and Robbie Basho, to expand the capabilities and repertoire of the acoustic guitar.

On July 29, Ward is scheduled to perform at the Merge Records 15th Anniversary Festival in Carrboro, N.C. He will join a double bill with singer-songwriter Bright Eyes (a.k.a. Conor Oberst) for a series of West Coast dates this October.