Accessibility links
Singing Wi-Fi Radio's Praises David Was has been taking a radio to bed with him for years. But his new Wi-Fi radio, which transmits music from French, Algerian, and Indian stations, has him singing the praises of infinite choice. 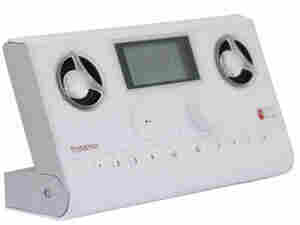 The Phoenix: the Wi-Fi radio David Was has been sleeping with. courtesy of Com One hide caption

toggle caption
courtesy of Com One

Ever since I was a young teenager in music-mad Detroit, I have taken a radio to bed with me more consistently than another person, which is as much of a boast as it is a shamefaced confession. There's something comforting in knowing that my body is swathed in violins or blues songs, and not just the random noises of the night. I have always slept well, and I have Mozart and Muddy Waters to thank for it.

My love affair with the radio began with the under-blanket transistor AM portable, and has now quantum-leaped to the stand-alone Phoenix Wi-Fi Internet Radio, which pulls in every station from Algeria to Japan — anything that streams via a Web browser, but without the need for a computer. Like satellite radio, this is an invention I dreamed up in high school: a radio you could tune to anything from Indian ragas to Hank Williams, any time of the day or night. Well, the future is upon us, and it's impossible to imagine turning back.

Right now, a spin of the Wi-Fi dial takes me to France's Oui FM, which is playing The Wombats, a Liverpudlian band. Joy Division is on Germany's Darkerradio, and Pashto Radio out of India is blowing some garish Bollywood soundtrack noise. You can listen to podcasts or comedy routines, all without loading a webpage or installing a player. Wait a few seconds for the station to buffer, and you are on your way to a brave new world of content on demand — from talk radio to techno, mariachis to Mantovani.

I suppose a French existentialist like Jean-Paul Sartre would frown upon such an expansive menu, choice being our undoing as moderns. But was it better to have been hemmed in by the hegemony of program directors and DJs back in the medium's golden age? Back then, the records that made the airplay charts were often as not subject to the back-alley influence of mob-connected bagmen who delivered TV sets and envelopes full of $100 bills along with the latest candidate for a hit single. That system is still alive and well in commercial radio, despite Eliot Spitzer's attempts to rein in the Payola Game in New York State.

The late '60s in a great cultural melting pot like Detroit did give rise to what was known as free-form radio, with old hippie DJs playing anything they dang well pleased, from the endless drum-bashing of "Inagaddadavida" to Dylan's prolix poetics on a song like "Sad Eyed Lady of the Lowlands." Genre mattered less than vibe, even if that meant playing Miles Davis and Captain Beefheart back-to-back. There was a new democracy afoot in what had been an advertising-driven, corruption-influenced medium.

Now, the diametrically opposite trend has taken hold. With the seemingly infinite real estate of broadband, one can tune in a station called Beethoven Only and prove that man can indeed live on Ludwig alone.

David Was is a contributor to Day to Day, as well as one half of the musical duo Was (Not Was).