Accessibility links
Allons-y! Why We've Been Traveling With 'Doctor Who' For 50 Years The classic British sci-fi series Doctor Who turns 50 today — though the time-traveling Doctor himself is probably somewhere on the wrong side of 1000. NPR's Petra Mayer has an appreciation of the show and the enduring appeal of its ancient, alien hero. 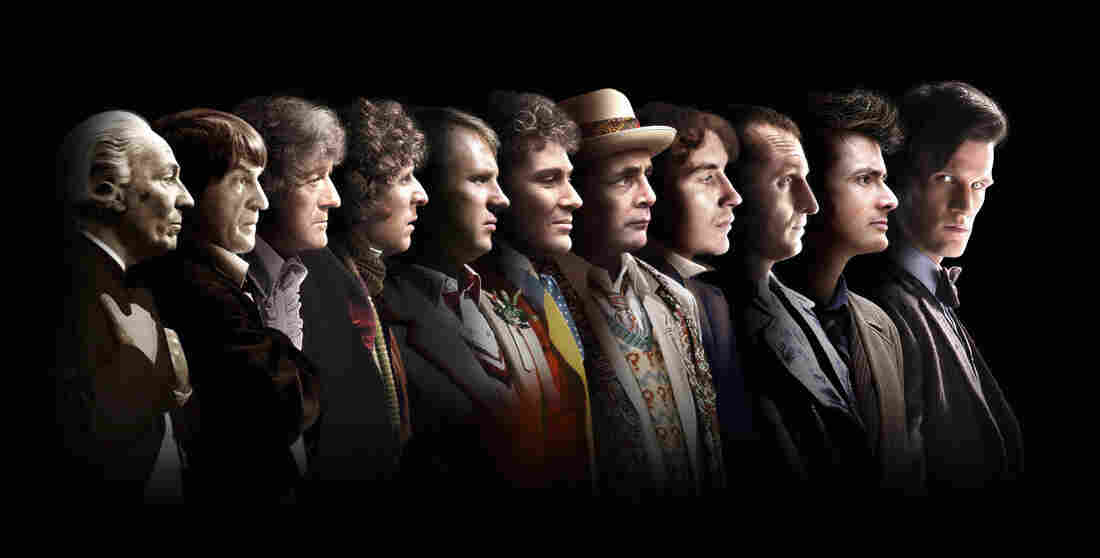 There have been 11 incarnations of the Doctor since the show began in 1963. Matt Burlem/BBC America hide caption

This afternoon, millions of fez-wearing fans around the world will tune in to a very special episode of Doctor Who. The venerable British sci-fi series turns 50 today — though the time traveling alien Doctor himself is probably somewhere on the wrong side of 1,000.

From scrappy, low-budget beginnings (bubble-wrap monsters, anyone?), Doctor Who has become a global phenomenon. Only soap operas can match it for longevity and popularity. So what's the secret to the Doctor's appeal? 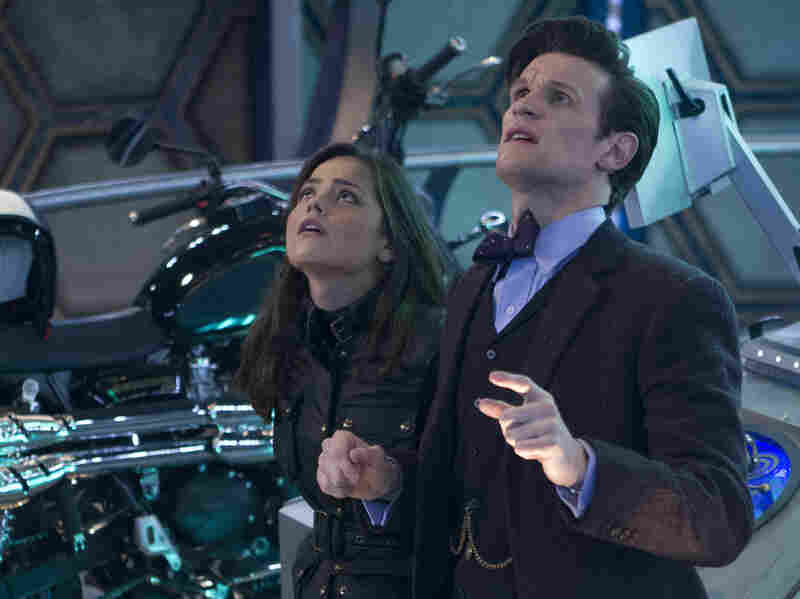 Jenna Coleman plays Clara, companion to Eleventh Doctor Matt Smith. The relationship between the Doctor and his companions is at the core of Doctor Who's long-lived appeal. Adrian Rogers/BBC hide caption 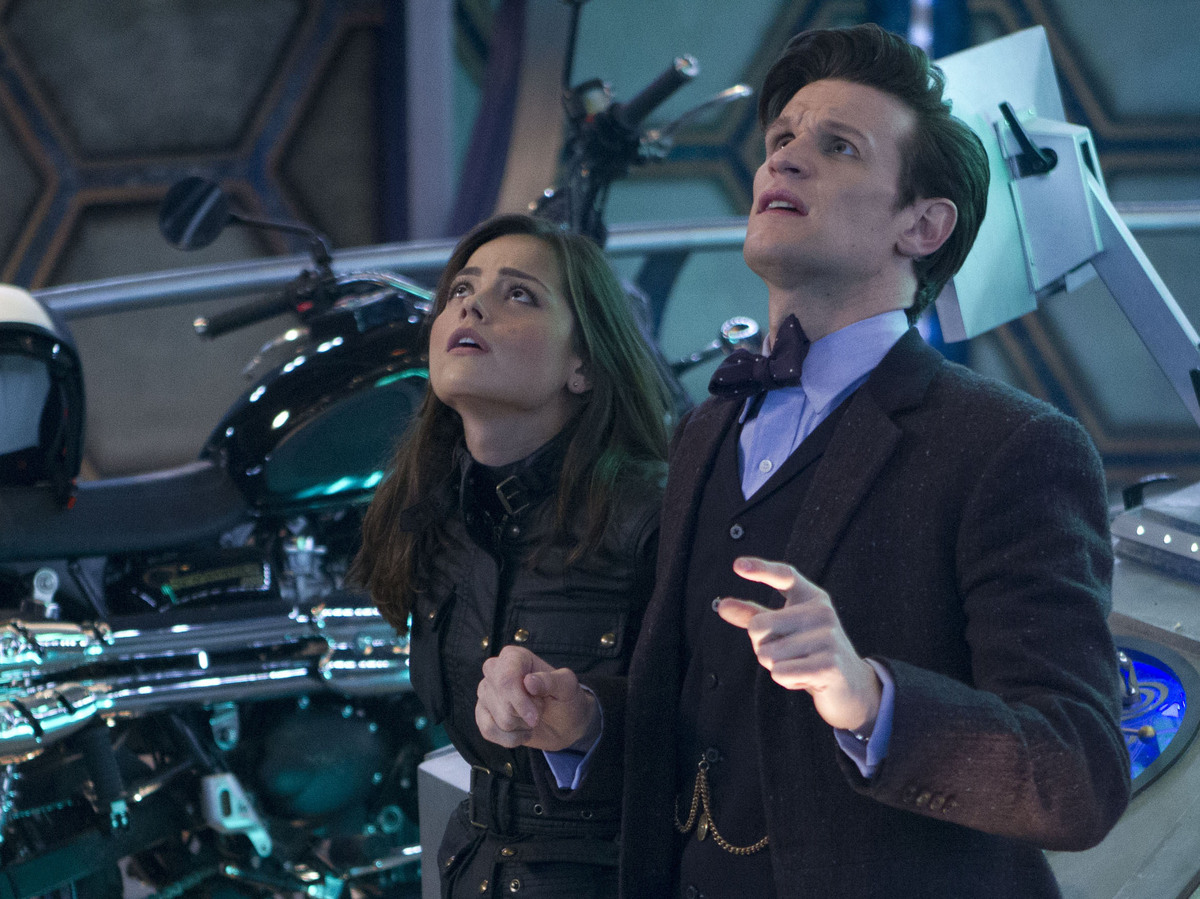 Jenna Coleman plays Clara, companion to Eleventh Doctor Matt Smith. The relationship between the Doctor and his companions is at the core of Doctor Who's long-lived appeal.

Well, let's start with a ringtone — mine, to be exact. Call me, and my phone will play the famous grinding, screeching sound of the TARDIS taking off. That's Time and Relative Dimensions in Space for you non-fans — the Doctor's beloved bigger-on-the-inside time and space machine.

Whenever that ringtone goes off, heads pop up all around me, and I know that everyone's thinking the same thing: he's come. He's finally come. For me.

The Doctor is an ancient two-hearted alien from a long-dead far-off planet. He can go anywhere, any time, and do just about anything — he's sort of a superhero without much of a mission besides his probably misguided love of the human race. And he almost always has a human companion. It's a way for those of us who watch to imagine ourselves into the action, to cherish a little corner of hope that one day it might be us out there among the stars.

And who wouldn't want to travel with the Doctor? "He was terribly like me, really," says Tom Baker, who played the Fourth Doctor. "Absolutely charming and unpredictable, and had a kind of benevolent alien quality."

To The Tardis! There's A 'Whodle' Taking Over The Web!

Still Not Ginger: In Which We Express Cautious Excitement About Peter Capaldi

Eleven men have played the Doctor so far — he has the alien power of regeneration; very handy when you need to swap out actors on a long-running show. But it also means that whatever your tastes, there's a Doctor for you: cranky, whimsical, debonair, manic, hopeful, bitchy, scheming, elegant, wounded, youthful, weird — and always, always bigger on the inside.

"We find our consolations in heroes and heroines, and Doctor Who was one of those charismatic figures who wasn't necessarily beautiful, but he did things which bordered on the miraculous," Baker says.

Bordering on the miraculous, yes, but he doesn't always get across that border. The Doctor's no Superman, no Captain Kirk — sometimes he doesn't save the day. Sometimes the companions get killed, or mind-wiped, or lost in an alternate universe. And sometimes, the Doctor is just scary; in one episode he's famously described as "like fire and ice and rage ... like the night and the storm in the heart of the sun."

But it's always the companion who holds his hand, who brings him back. It's that relationship between the Doctor and the companion — and by extension, the viewer — that's at the core of the show: we may need the Doctor, but he needs us just as much.

So I've got my bags packed and one eye on the sky. Here I am, Doctor — allons-y!