After a six-and-a-half-year journey, NASA's Cassini spacecraft becomes the first to enter Saturn's orbit. The bus-sized spacecraft will spend the next several years exploring the planet, its rings and its moons. NPR's Richard Harris reports. 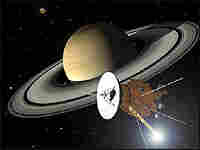