Web Extra: How Tres Chicas Got Its Name

Don't let the Spanish name fool you –- only the number and gender hold up in translation. The members of Tres Chicas -- Lynn Blakey, Caitlin Cary and Tonya Lamm -– are not the latest Latin thing, but a trio of female singer-songwriters with impressive alt-country pedigrees. 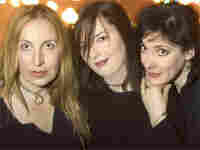 The three have recorded and performed over the last decade with Whiskeytown (Cary), Hazeldine (Lamm) and Glory Fountain (Blakey), among other groups in their neighborhood of Raleigh, N.C. Chris Stamey, a founding member of seminal southern pop groups the Sneakers and the dBs, produced and played guitar on the debut Tres Chicas CD Sweetwater.

The women are close friends and their earlier bands often shared a stage. Then one fateful night in a ladies room, Blakey was staring in the mirror, nursing a recently broken heart.

Cary and Lamm walked in together. "I already had a band (Glory Fountain), but for some reason, I wanted a band with them," says Blakey. Tres Chicas was born.

Sweetwater, released in June, is a collaborative effort. It features songs written by all three artists plus a few well-chosen cover tunes, including tracks by country legend George Jones and alt-country queen Lucinda Williams.